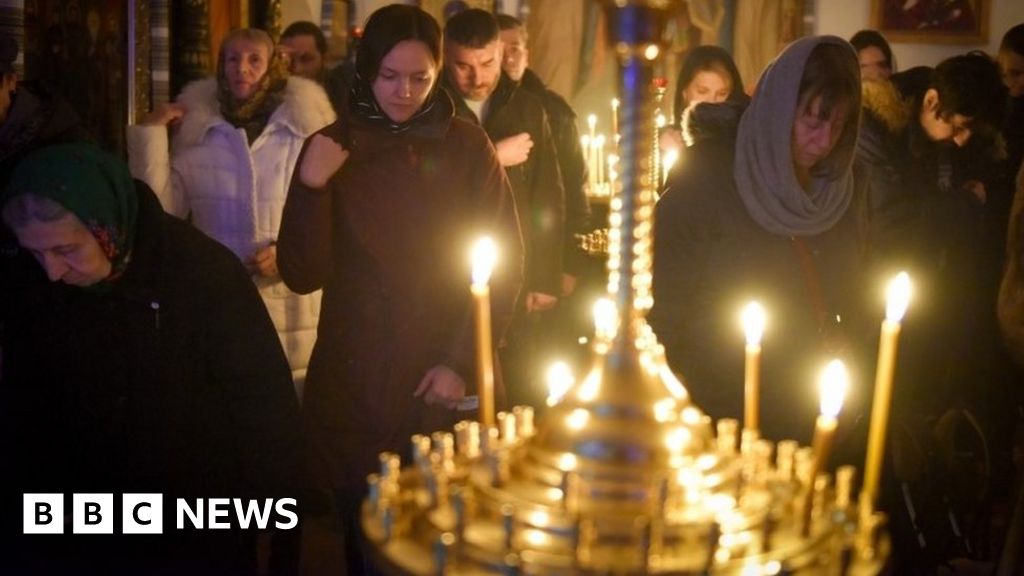 Ukrainian President Volodymyr Zelensky has urged his people to persevere in the face of Russian attacks as the country celebrates Christmas.

In a defiant speech on Saturday, he said: “Freedom comes at a high price. But slavery has an even higher price.”

Russia’s missile and drone attacks have left millions of Ukrainians without power, heating and running water.

The regional authorities said another 68 people were injured and called on local residents to urgently donate blood.

Describing Russia as a “terrorist country”, Mr Zelensky accused Russian troops of “killing for the sake of intimidation and pleasure”.

In a post on social media, he showed pictures of streets strewn with bodies and burning cars, saying “the world must see and understand what absolute evil we are fighting against”.

Kherson, the only regional capital captured by Russia since it launched its full-scale invasion on 24 February, was liberated by Ukraine last month.

Since then it has been frequently targeted by Russian forces positioned on the left (eastern) bank of the Dnipro river.

Moscow has repeatedly denied targeting civilians in its attacks. However, President Vladimir Putin has recently admitted that Russian troops have been hitting Ukraine’s critical energy facilities.

Most Ukrainians are Orthodox Christians, and mark Christmas Eve – the main day of the festive season in the country – on 6 January.

However, a growing number of worshippers have been celebrating the day on 24 December, in line with the majority of Christians around the world.

Image caption, President Zelensky: “We will not wait for a miracle. After all, we create it ourselves”

In a video address to the nation late on Saturday, Mr Zelensky said: “We endured at the beginning of the war. We endured attacks, threats, nuclear blackmail, terror, missile strikes. Let’s endure this winter because we know what we are fighting for.

“We will celebrate our holidays! As always. We will smile and be happy. As always. The difference is one. We will not wait for a miracle. After all, we create it ourselves.”

For many Ukrainians, Christmas will be in the dark and in the cold, says the BBC’s Hugo Bachega in Kyiv.

But Ukrainians say the hardships have only made them stronger, as the war enters its 11th month, our correspondent adds.

California father is charged with attempted murder after allegedly driving his family off an oceanside cliff, prosecutors say

Tech’s latest controversy? The return of the five-day, in-person...

Recall.ai helps companies make the most of virtual meeting...

Ty Gibbs looking to finish strong in Xfinity with...

New Details Revealed About the Transformation of EPCOT

Facebook reports losing users for the first time in...

Google is rolling out Chrome improvements on Android tablets...

Consumers Feel Worse Now Than They Did During Pandemic…

Ardern to Fly to UN in New York on...

Sweden to offer $23 bln in liquidity guarantees to...

Super Bowl ads look toward the future — and...

NASA continues to work with Russia on space station

Michigan woman sentenced after trying to hire hitman for...

As the 8 billionth child is born, who were...

Levelling up: ‘It’s about time money was put in’

Silicon Valley Takes a Side in the Great Gas...

Researchers asked workers what they wanted most from employers...

Jeff Zucker’s Replacement at CNN Will Be Chris Licht

What the Fed’s Powell thinks about inflation and Ukraine

Ubisoft will shut down ‘Hyper Scape’ on April 28th

The next frontier of capitalism died along with the...

French Lessons: What Emmanuel Macron Tells Us About Winning...

Man who stormed Capitol with father sentenced to 2...

Will USMNT’s striker problems be COSTLY in matchup vs....

The Yankees’ Dream Is a World Series. Their Nightmare...

Ex-MMA fighter charged in death of girlfriend in Mexico

Christmas Day forecast in South Florida: It will be cold and dreary
Homeland Security pleads with migrants to turn back in Christmas warning