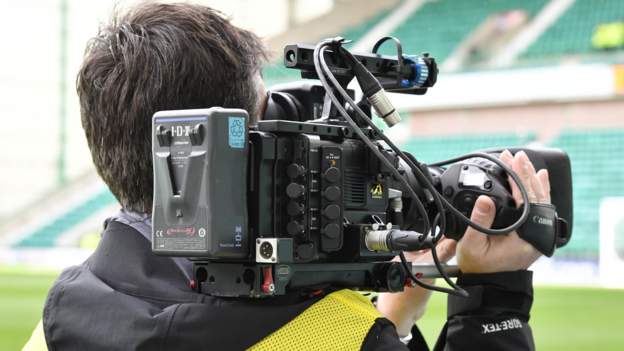 A SPFL board meeting on Monday will discuss a report that suggests Scottish football broadcast revenues could swell to as much as £50m per year.

The figure comes from Deloitte’s review into the game and is an uplift on the £32m per annum received for the current five-year deals, which run to 2025.

The clubs who initiated the report – Aberdeen, Dundee, Dundee United, Hearts and Hibernian – will be at the meeting.

Celtic have also been invited to join board members Rangers and Ross County.

Hamilton Academical, Dunfermline Athletic and Forfar Athletic will also be in attendance as elected representatives of the lower leagues.

“We believe we can get to £50m in the next five-to-10 years,” he said. “We believe there’s an immediate 20-30 per cent increase and we’re working on that with Deloitte.

“We think there is an opportunity, broadcasting wise, to potentially put another package together of other games. Some of the analysis against other leagues has shown that we don’t give very many games compared to other leagues.

“That’s one aspect domestically. Internationally as well, I think there’s a strong feeling from this that we could be doing better internationally with selling the Scottish game as an authentic game.

“I don’t have the specific data. But what I can tell you is that it’s our understanding that the viewing of Scottish football with Sky has gone up by at least 30 per cent.”

Lemonade Set to Buy Insurer Metromile in Its First...

Opinion | Congress Should Seize This Chance to Get...

A new bill curbing presidential powers addresses problems that arise during Republican and Democratic presidencies. Members of Congress in both parties should embrace its reforms.
Read more

Your Evening Briefing: Omicron May Send Fewer People to...

A school employee in Michigan who cut a biracial girl's hair without her parents' permission and in violation of school policy will remain employed after the district said it uncovered no evidence the incident was motivat...
Read more

The leader of a drug-trafficking organization pleaded guilty Tuesday in Manhattan federal court to conspiring to distribute heroin, cocaine and fentanyl, including the drugs that caused the 2018 death of Colin Kroll, the co-founder of the video-hosting servic…
Read more

Your Evening Briefing: Russia’s Deadliest Month of the Pandemic

Vast Antarctic iceberg could drift through ocean for years

Turn Up the Magical Sounds of Disneyland Paris with...

You can now turn up the magic from wherever you are with music from Disneyland Paris! Today, Disneyland Paris is launching its own official channels on Spotify and YouTube Music.
Read more

Changing the world one ballot at a time

We are fully prepared to help Congress in any way that we can in order to guarantee that all Americans, especially blind Americans, can confidently participate in our electoral democracy.
Read more

Kaytlin Chau, 11, was fishing with her dad and brother in Arlington, South Dakota, when she reeled in a 10 pound, 2 ounce largemouth bass.
Read more

Valorant's new update is out bringing Episode 3 Act I. Riot Games has revealed the patch notes as well.
Read more

UK shares rebounded on Tuesday, led by gains in commodity and travel stocks, though fears around surging cases of the Omicron COVID-19 variant persisted heading into Christmas holidays.
Read more

The first 2022 congressional election is underway

A multi-story building near Miami has partially collapsed, authorities...

In place of LinkedIn, Microsoft will launch "InJobs," a stand-alone app that will not feature LinkedIn's social media aspects.
Read more

We must demonstrate our commitment to shared democratic values, in both words and in deeds.
Read more

Collins Dictionary picks NFT as word of the year...

Presented by Janssen Pharmaceutical Companies of Johnson & Johnson With Sarah Ferris. NOT SO FAST Theres a lot of talk about a House vote as...
Read more

​​’Stop the Steal’ organizer served with lawsuit after 8-hour...

Ali Alexander, an organizer behind the "Stop the Steal" rally, was served with a civil lawsuit on Thursday following his hours-long deposition before the Jan. 6 commission.Alexander had met with ...
Read more

New guidance to work from home is greeted with dismay by firms that thrive when workers are in offices.
Read more

How does a food processor work?

With sharp blades and lots of parts to assemble, food processors can be daunting appliances, here we explain how they work and why you need one
Read more

Minnesota to require state employees to get vaccinated or...

Minnesota will now require state employees to either be vaccinated or go through weekly COVID-19 testing before returning to work. ...
Read more

Facebook says it is taking several measures, including reducing distribution of content deemed to be hate speech, to curb spread of misinformation during elections in four Indian States.
Read more

Erica Ferguson and Dr. Julie Shaw are two women's basketball coaches who fell in love with the game – then with each other. The couple shared their story of acceptance, building businesses, and their inspiring wedding photos.
Read more

The latest stage in the town's regeneration and includes work on the historic Coats Observatory.
Read more

Chicago Mayor Lori Lightfoot vowed Friday there would be "consequences" for any city employees who aren’t fully vaccinated by Oct. 15, according to reports, as the city continued negotiations with labor unions.
Read more

There is a shortage of specialised staff and equipment such as oxygen monitors, researchers find.
Read more

Andrew RT Davies says flu and Covid have "had an impact on my mental well-being".
Read more

Football Focus: Dan Walker signs off as host for...

Dan Walker thanks all the people he has been involved with working on Football Focus this season as he signs off as host for the final time.
Read more

Michael Spavor's case is part of a diplomatic spat between China and the US and Canada.
Read more

Thanks to a purported issue with TPM security which is a requirement for Windows 11.
Read more

A body language expert unpacks the postures and gestures of the two world leaders at their summit.
Read more

Deep social discontent that has festered throughout the coronavirus pandemic is driving thousands of Colombians into the streets to protest, and some of the demonstrations have turned deadly
Read more

Japan has signed a historic defense treaty with Australia, but must do more to ensure its self defense. The post Pacific Powers Face China’s Rise appeared first on The American Conservative.
Read more

Dangerous, record-busting heat is spreading across the U.S. Southwest and into parts of Utah, Montana and Wyoming
Read more

England will face Denmark in the Euro 2020 semi-finals on Wednesday, but what is the latest with tickets and how many will be able to watch at Wembley?
Read more

Nearly one week on, Louisiana is struggling to recover from Hurricane Ida’s devastating blow.
Read more

19-year-old attempts to become youngest woman to fly around...

19-year-old Zara Rutherford is on a mission to become the youngest woman to fly around the world solo. Her goal is not just to break records, but to break barriers in the male-dominated aviation industry. Ian Lee has more.
Read more

Pfizer Inc. and BioNTech SE have submitted an application to U.S. regulators to administer their Covid-19 vaccine to children ages 5 to 11,...
Read more

Aid for the undocumented

The US climate envoy says half of reductions to reach net zero will come from technology "we don't yet have".
Read more

We have a good idea of all the shades to expect the Samsung Galaxy S22 range in. Here's what we've heard so far.
Read more

Climate change: Why are disabled people so affected by...

Disabled people are among those worst affected by emergencies, including climate crises - but why?
Read more

Speaker Nancy Pelosi (D-Calif.) announced on Thursday that she was extending proxy voting in the House, which was ...
Read more

Searchers find personal, religious possessions among the ruins of Champlain Towers South in Surfside, Florida. How they will be claimed remains unclear.
Read more

An investigation of 196 countries by the Washington Post found that emissions are underreported by billions of tons. Stanford Earth scientist and chair of the Global Carbon Project Rob Jackson joins CBSN's Elaine Quijano to explain why.
Read more

The supply chain issue and labor woes are driving prices higher and creating a shortage of goods across the nation. President Biden announced a new agreement for the Port of Los Angeles to try to ease congestion, but White House Correspondent for the FOX Busi…
Read more

A day care center in Nebraska has been linked to 100 coronavirus cases including some from the U.K. variant, according to health officials.
Read more

A ransomware group said it published its "full data" on the Washington Metropolitan Police Department this week, claiming the department's payment offer wasn't enough to prevent the release, according to screenshots of online posts by the group that were revi…
Read more

Police release an image of a man they want to speak to after an assault near a south London park.
Read more

Secretary of State Antony Blinken to travel to Qatar...

Blinken also said the State Department is "constant contact" with Americans in Afghanistan who may wish to leave.
Read more

The Education Department announced on Monday that it has opened civil rights investigations into five statewide bans on mask mandates to determine whether they discriminate against students with disabilities....
Read more

Patrick Mahomes’ brother was on the receiving end of some strong criticism from NFL fans after he was seen doing a TikTok dance on the Sean Taylor memorial logo that was on FedExField as the Kansas City Chiefs played the Washington Football Team on Sunday.
Read more

El Salvador’s Legislative Assembly has approved legislation making the cryptocurrency Bitcoin legal tender in the country, the first country to do so
Read more

Ron Johnson: ‘Americans are not looking for election reform’

Sen. Ron Johnson (R-Wis.) on Sunday accused Democrats of trying to radically change the country through voting legislation and of being "willing to destroy the institution of the Senate to pass a bill that's a non-solutio...
Read more

Businesses and colleges should consider requiring people to get vaccinated against Covid-19 in light of the surge of U.S. cases driven by the delta variant, Anthony Fauci said Friday.
Read more

Covid: Boris Johnson says there will be no new...

But Boris Johnson says "we can't rule out any further measures after Christmas" as Omicron spreads fast.
Read more

Apple assembler Foxconn in the line of fire in India