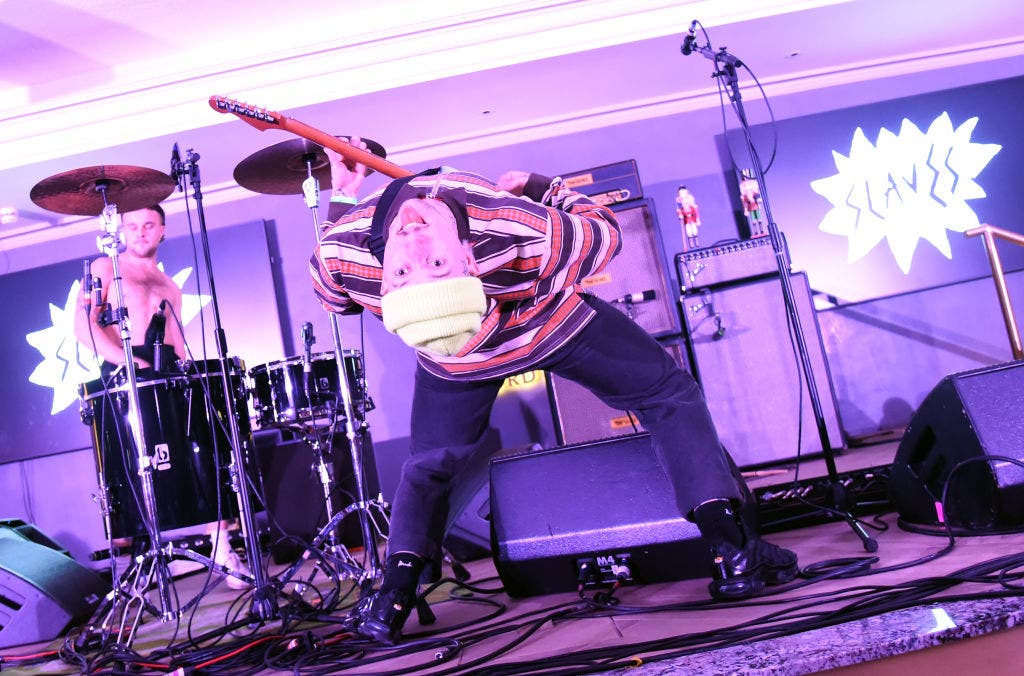 British band Slaves announced that they have changed their name to Soft Play and apologized for any offense caused by their original name.

The U.K. punk rock duo, which consists of frontman Laurie Vincent and drummer Isaac Holman, have performed under the name Slaves since forming the band in 2012 but have faced backlash over the name’s historical connotations.

The band, who have been on hiatus since 2018, issued a statement announcing their return but said before that, “we want to address something important.”

“When we called our band Slaves, it was intended solely as a reference to the grind of day to day life,” the two wrote in a post on their new official Instagram page.

British band Slaves announced that they have changed their name to Soft Play and apologized for any offense caused by their original name.

They continued, “As younger men, we responded to criticism of the name from a place of fear and defensiveness.”

“Feeling backed into a corner, our own pride caused us to fight for a name we werent even sure we wanted anymore. It felt at times as if our band name had defined us and we were scared of what might happen if we changed it.”

“However, we now recognize that our original intent doesnt change the fact that the name Slaves is an issue,” Vincent and Holman explained.

“In this day and age we believe it is very important that people change and make improvements no matter how far down the line they are,” they added.

The U.K. punk rock duo, which consists of frontman Laurie Vincent and drummer Isaac Holman, have performed under the name Slaves since forming the band in 2012.

“The name doesnt represent who we are as people or what our music stands for any longer. We want to sincerely apologize to anyone weve offended.”

While the two acknowledged that people may have “differing opinions” on their previous moniker, they expressed their hope that their fans would “accept and respect our decision and not continue the argument between yourselves.”

The pair noted, “When it comes down to it, the music and the community surrounding our band are what matter the most and we dont want anything to stand in the way of that community being as inclusive as possible.

“Our music is for anyone and everyone.”

The band went on to say that they would be performing together again under the name Soft Play.

“We are very happy to be back together again and are excited for what the future holds,” they concluded.

The duo’s 2015 debut alum “Are You Satisfied?” reached number 8 on the UK Albums Chart and was nominated for a Mercury Music prize. Their follow-up albums, 2016’s “Take Control” and 2018’s “Act of Fear and Love” both entered the top 10 on the U.K. charts.

In 2015, the band were featured in a Fader article titled “Why Would A Band Of White Dudes Name Themselves Slaves?”

In 2015, the band were featured in a Fader article titled “Why Would A Band Of White Dudes Name Themselves Slaves?”

At the time, Vincent told Fader that he and Holman were surprised by criticism of the band’s name. He explained that they were looking for “an abrasive sounding word, like Clash” when they were tying to come up with a name.

“We just liked the word. We weren’t trying to provoke,” he added.

Vincent told the outlet, “Someone once wrote on our Facebook wall, ‘Nobody but African Americans have a right to use the word slaves.”

He continued, “Obviously, lots of words have two meaningsif you said ‘I feel like a slave at work’ or ‘I’m a slave to the routine,’ that’s not being disrespectful to the slave trade.”

“You have to use words, or you’re just going to be scared of everything. We live in a society already where people are terrified of the way they act being interpreted, and it’s just getting harder.”

Ashley Hume is an entertainment writer for Fox News Digital. Story tips can be sent to [email protected] and on Twitter: @ashleyhume Anita Sarkeesian Hates Talking About Gamergate—But She Has To

The 4 most recession-proof industries to work in, according...

Domenech: We have a crisis in this country of...

Economist weighs in on record high inflation rate in...

Nadler, Maloney could face off in primary with redrawn...

Free childcare in Wales: 3,000 two-year-olds to get places

Visa wait times of over 2 years are keeping...

US to hold trade talks with Taiwan in new...

China eases restrictions in major move away from ‘zero-Covid’...

Unleash your inner ninja with this limited-edition Naruto gaming...

For the first time in 4 years, profitability beats...

Major wildfire in Spain forces the evacuation of 1,500

Some in GOP begin testing party’s lockstep loyalty to...

Kathrine Switzer on her legacy in the running world

Pinocchio and the Power of a Disney ‘Wish’

How community colleges fit in to the promise of...

Trevor Lawrence’s response to bad game will say a...

4 trends that will define e-commerce in 2022

See Ya, Siesta Key: Juliette And Sam Are Both...

Disney+ Subscribers Can Save On a Walt Disney World...