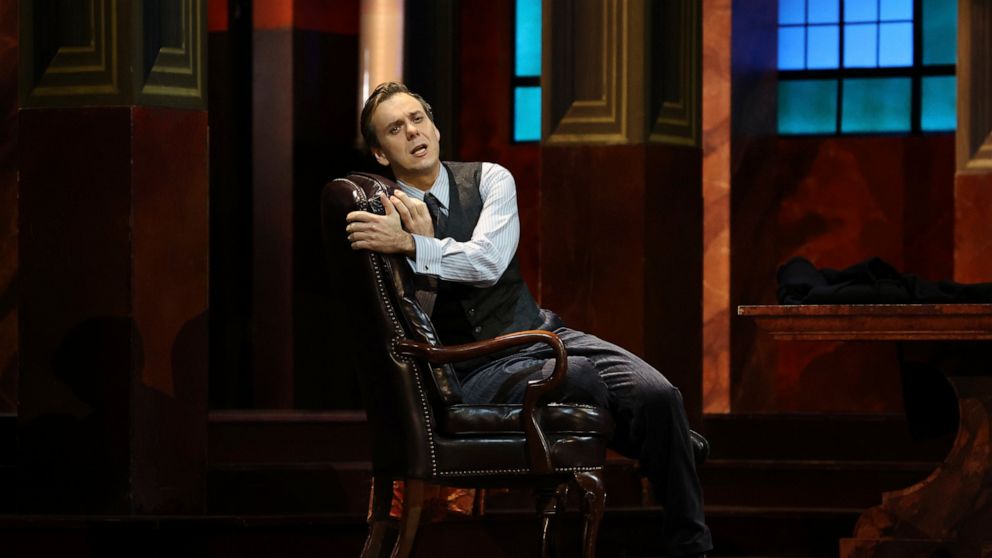 NEW YORK — Fresh off a triumphant debut, French tenor Benjamin Bernheim seems likely to become a familiar presence at the Metropolitan Opera. Just not too familiar, he hopes.

Bernheim, already a star at major European houses, is one of a new crop of tenors being introduced to American audiences now that pandemic shutdowns and travel restrictions are largely a thing of the past.

And hes got the support of Peter Gelb, the Mets general manager, who says, Its always good to get new blood, and sees Bernheim as someone he can cast in leading roles for years to come.

Peter wants me to create a profile for myself and for the Met, Bernheim said in an interview. For now were on a once-a-year basis, which I think is very good, because I also dont want to be the guy who people say, Oh him again! It can very easily be the case. People want to see new faces too.

He admits he was slightly apprehensive at the prospect of introducing himself to the Met audience as the ruthless, womanizing Duke in Verdis Rigoletto. His final performance in the role is Thursday.

Hes not a very lovable character, Bernheim said. And you see all the names who sang the Duke here and you feel, wow, thats pressure, especially for a debut. Those names include Enrico Caruso, who sang the role for his 1903 debut, and more recently giants like Richard Tucker and Luciano Pavarotti.

It turns out he neednt have worried. Critic Oussama Zahr in The New York Times called him a lyric tenor who roars on top with genuinely thrilling, auditorium-filling sound, while David Salazar wrote on the OperaWire website: He exuded vocal confidence, every note coming through crystal clear, every phrase elegantly thrown off.

Bernheim, 37, actually made his U.S. debut back in 2018 in Gounods Faust at Lyric Opera of Chicago. A Met appearance should have followed quickly, but two obstacles intervened: his need to be near his daughter, now 8, who lives in Switzerland, and the global pandemic.

Now that hes finally arrived, hell be back next season in Gounods Romeo et Juliette and is slated to star in Offenbachs Les Contes dHoffmann after that. These will both be revivals; for now hes unwilling to commit to the extra time hed need to be away from his daughter to rehearse and perform a new production.

Hes excited that audiences will next get to hear him in French repertoire, which he believes is ideally suited to his voice.

Its what Ive been working for so many years, to make my singing voice in French as close as possible to my speaking voice, he said.

What I have today is a palette of colors, but a very large palette, maybe because its a golden time for my voice, Bernheim said. I can go strong, I can go heavy, I can go trumpety but I can also go very soft, and I can still tell a story with the colors, with the mixed voice.

Hes determined to keep that balance as long as possible and is wary of taking on roles that require a heavier or spinto sound.

If I force, it doesnt work anymore, he said. There are voices in nature more pushy, he said. If I push, I lose the light, I lose the sparkle. I have to keep this balance between strength and lightness.

For instance, he said the French version of Verdis Don Carlos is one of my dreams, but I dont have what it requires to sing it the way I want to. I would be frustrated and I dont think I would give a good enough rendition to the audience, so this will wait.

One new spinto role he is planning is Gabriele Adorno in Verdis Simon Boccanegra.

It works with my voice and I can play with the colors, he said. But this one little step, and then I need to come back to the lyric, because if I cross the line too many times now, will I be able to come back?

Perhaps ironically given his successful career, he originally didnt want to be a tenor at all. From the days his voice started changing and he had to give up singing in a childrens choir in Geneva, Switzerland, he tried to develop his lower register.

I find the baritone voice much more noble, he said. Unfortunately, there was never a doubt. Even my professor, years ago when I was struggling with high notes, I said, Could we try baritone? and he said, Oh, Ben, not for you.

Here are a few of the other up-and-coming tenors Gelb plans to introduce to Met audiences this season or in the near future:

Ismael Jordi, another Spaniard, who was to have made his debut in the canceled 2020-21season in Romeo et Juliette, and now will debut this January in Verdis La Traviata.

Jonathan Tetelman, a Chilean-American singer who recently drew praise in San Francisco in Verdis La Traviata and will make his Houston debut next spring in Puccinis Tosca.

Freddie De Tommaso, a British-Italian, who has been acclaimed at Londons Royal Opera House and will make his U.S. debut this summer in Santa Fe, New Mexico, also in Tosca.

SeokJong Baek, a South Korean who started as a baritone but recently triumphed as the tenor lead in Saint-Saëns Samson et Dalila at the Royal Opera.

Pene Pati, born in Samoa and raised in New Zealand, who was just honored with the Readers Award at the 2022 International Opera Awards ceremony in Madrid.

Serena Williams indicates she will play in this year’s...

These Android features will help protect your digital privacy...

At last, a gnat-sized affordable wireless mic set for...

The Governor of Colorado Is High on Blockchain

Steelers need to set a hard deadline for Stephon...

Here’s what the Outback Steakhouse of the future looks...

Biden: “Using every tool” to curb price hikes after...

UK’s Truss tries to shake off dismal start with...

A rare Google Pixel 7 leak reminds us why...

US wholesale inflation declines in August to still-high 8.7%

Paul Pelosi out of surgery after attack

Honor’s improved Magic VS foldable will go on sale...

Whiteabbey Hospital: Rehabilitation unit to be wound down

Cybersecurity could offer a way for underrepresented groups to...

‘Cash is king, but care is queen’: Business executives...

Davos meeting gabfest to wrap up with German leader

Here are the key questions that remain unanswered after...

The CW’s ‘The Winchesters’ is a ‘Supernatural’ origin story

Christina Applegate: “I wish I had paid attention” to...

Ethereum Merge: How one big cryptocurrency is going green