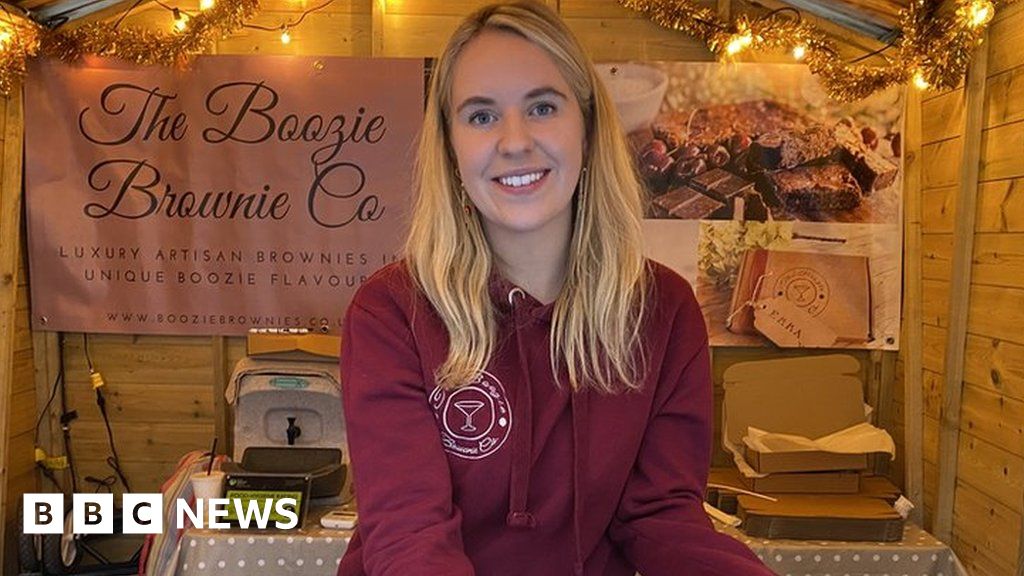 Christmas market stall holders fear their profit margins will be badly hit this year as their goods are costing far more to produce.

Stall holders at Cardiff Christmas market will be selling produce until 23 December.

After surviving Covid, traders are now faced with a rise in their costs because of the cost of living crisis.

However, some stall holders remain optimistic and said they were grateful for shoppers’ support.

Emily Becketts, owner of Boozie Brownie Co, based in Herefordshire, has a stall at Cardiff Christmas market for the second time.

She started her business in lockdown after leaving her job in a bakery.

“I am starting to notice that people are less likely to buy my brownies this year with the cost of living rising,” she said.

“People are still responding well to the brownies and are enjoying my free samples, but they don’t seem to be buying them.”

Image caption, Emily Becketts explained that some of the ingredients she uses have gone up by 45%

Ms Becketts said her online sales had dropped since Covid so has started selling her products at more events.

The chocolate, butter and eggs she uses for her brownies have gone up by 45% in the past two years.

“The industrial oven I use costs me £12 in electric a day and I had a warning in my last bill that my electricity usage had doubled since last year,” she said.

“This left me with no other option but to increase my prices from £2.50 a brownie last year to now £3.

“I’m just hoping my sales will be as good this year as they were last year.”

Another stall holder, Emily Morgan, created her luxury tea business after leaving her job as a teacher in 2017.

The business owner from Porthcawl, Bridgend county, said: “I have noticed that there’s been a slump in my sales. It’s affecting me as I have got lots of bills to pay.”

Ms Morgan explained how one of the ingredients she uses for her tea, chamomile, has gone from costing £12 per kilogram to £22.

Image caption, Emily Morgan, the owner of Tea by the Sea, left her teaching career to start her business

As profit margins for chamomile tea are now smaller, she had no choice but to put her prices up by 25p.

“I have managed to weather the storm so far but if it gets worse I will have to put all of my prices up,” she said.

Ms Morgan said it costs £120 a day to rent a stall in Cardiff Christmas Market – equating to £5,000 for the whole Christmas season.

Therefore, she has opted to only have her stall there for five days.

The 41-year-old said the jewellery boxes he buys had gone up 50% since last year and chains for the jewellery he makes have also increased in price by 30%.

Image caption, James Gregg, the owner of Handmade Boutique, fears that he might have to put his prices up next year due to profit margins falling

Mr Gregg has kept his prices the same for the last three years by swapping a solid silver chain for a silver plated one.

“I won’t be taking the same earnings today as I did this time last year,” he said.

“I’ll be down probably half. This does worry me, I may have to put my prices up next year.” Parler was jubilant about Kanye West buying it. Then...

1 million COVID-19 cases recorded in California in past...

We stand shoulder to shoulder with Ukraine – Cleverly

Powering Nigeria One Electric Capsule at a Time

Mark Levin ‘ashamed’ of US response to Ukraine invasion,...

Even a mild case of COVID could wreck your...

“Stop the Steal” organizer testifies before grand jury in...

GGV Capital latest to back Workstream’s goal of filling...

Ford Sales Jump in June on Big Gains for...

This open source ChatGPT alternative isn’t for everyone

Will Muir: Bath winger to miss the rest of...

This iOS 16.1 update makes the Dynamic Island even...

French teachers go on strike over handling of pandemic

‘I had to do something to gain his respect’:...

Mexico’s missing students: Where are the key players now?

Washington Post reporter says it ‘could be a little...

UK prime minister to call Putin in attempt to...

Dubai Ruler Gets Chunk of Developer Emaar in $2...

High-growth startups should start de-risking their path to IPO...

China deepens ties with Saudi Arabia with visit by...

White House will be resuming its full tours for...

US Cities Are Recycling Trees and Poop to Make...

Decrease in Salmon affects killer whales, according to studies

Trafalgar Square Christmas tree: The birth of a tradition

Collins to have follow-up call with Ketanji Brown Jackson

Chiefs reign supreme in ‘Herd Hierarchy’ ahead of NFL...

St Edward's Crown leaves Tower of London ahead of Coronation

Coding: Female engineers deleting myth that tech is for men