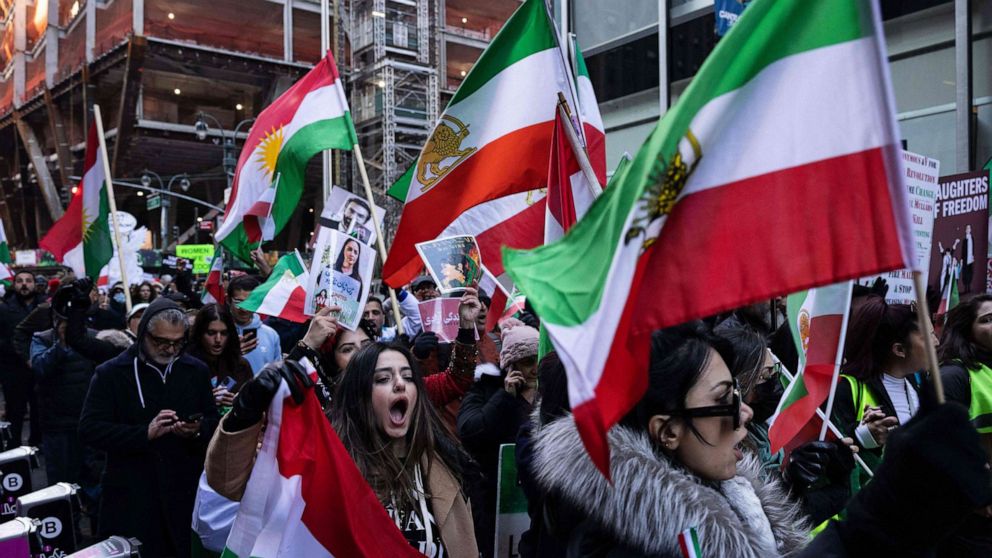 LONDON — Iranian authorities have been accused of stealing the bodies of slain protesters from hospitals and morgues in order to prevent families from holding funerals, which activists say could prove rallying points for the protests.

The families of the protesters who have been killed called it a disturbing new tactic of intimidation.

The U.N. has previously warned that Iranian authorities have refused the release of bodies or made their release contingent on the families staying silent.

Iran has denied allegations of human rights violations against protesters and has accused Western nations of turning “peaceful assemblies into riots and violence.”

The family of 16-year-old protester Nika Shakarami claim that her body was stolen by government forces in October.

Reza Haghighatnejad, an Iranian dissident journalist, worked in Prague for years for the Iranian branch of the U.S.-funded Radio Free Europe/Radio Liberty (RFE/RL). He died of cancer in a Berlin hospital in October. When his body was flown home to Iran at his familys request, his remains were not found at the airport, according to RFE.

According to the NGO Iran Human Rights, at least 448 people, including 60 children, have been killed since the protests began, though the true number is believed to be higher because of the difficulty in accessing death certificates.

The seizures have been particularly distressing for the families, who have been denied the opportunity to say goodbye to their loved ones. Sarah Haghighatnejad, the late journalist’s sister, published a video of her brother’s tombstone covered with flowers on her Twitter account. “Those who were even afraid of your lifeless body and did not give my mother and me a chance to say goodbye must pay the price, she wrote.

“They are taking away the chance from the mourning families to say goodbye in peace to have the last word with their loved ones,” Mehdi Tajik, a journalist and friend of Haghighatnejad, said. “They seize bodies to force the families to either say they were not killed by the police or to force them to bury them without a funeral.”

Some families have responded by keeping hold of their dead or scrambling to get to morgues where their loved ones are kept.

One protester, Mehran Samak, was shot dead while celebrating Iran’s World Cup loss to the U.S. on the streets of Anzali, a port city in the north of the country. His death sparked a rush from his family to recover Samaks body from the morgue, as they were scared he might be buried elsewhere by the authorities in secret, a friend of the family told ABC News.

The family of 10-year-old Kian Piraflak, shot dead in Izeh, Khuzestan Province, earlier this month, reportedly kept his body at home rather than a morgue out of fear he would be taken. Videos on social media have circulated showing women carrying buckets of ice, shouting “Ice! Ice for children” to symbolically protest the pain families go through to protect and preserve the bodies of their killed loved ones.

“She was forced to make a mobile morgue for the body of her child,” an Iranian journalist with knowledge of the alleged thefts told ABC News. The journalist did not want to be named for security reasons. “The fact that a mother cannot even think about seeking justice for the murder of her son, and instead she has to send people around to borrow ice so she can keep the body of her son cold overnight is pure horror and distress.”

Iran experts have said that the protests, which have united a diverse range of Iranians, pose the biggest challenge the regime has faced since the Islamic Revolution in 1979. In response, the authorities have pursued the deadly crackdown that has injured or killed hundreds and jailed thousands more.

California just got slammed with a series of severe...

Trump cutout among pranks left at Executive Mansion for...

Matthew Nolan in court after police cars rammed by...

Riskiest Bets in Stock Market Are Most Popular…

Brittney Griner vows to play this season after prisoner...

4 killed amid gunfire during argument at Houston apartment

House Republicans probe DOJ for info on reluctance to...

Sheryl Sandberg, Substack and the art of still raising...

PM Update: Showers and a few rumbles of thunder...

Can Jaguars upset Chiefs? Texans a frontrunner for Sean...

‘A Strange Loop’ wins the Tony Award for best...

Centene to divest two pharmacy businesses for about $2.8...

Fitzpatrick a winner again at Brookline as US Open...

Ruben Neves is incredulous that Fabian Schar avoids a...

Spotify backlash over Joe Rogan did little to boost...

Twitter is testing custom timelines, and first one is...

Report on sexual abuse in key German diocese to...

How businesses and their boards are navigating corporate jet...

A look at high-profile killings by US police

Meta’s Spanish-language moderators have reportedly been working in unsafe...

Many Americans are shunning the Omicron COVID booster. What...

Here’s how to get your 2023 tax refund today

Nick Kyrgios complains he smelled marijuana during win at...

Biden vowed 'consequences' for Saudi Arabia after oil production cut. But the...