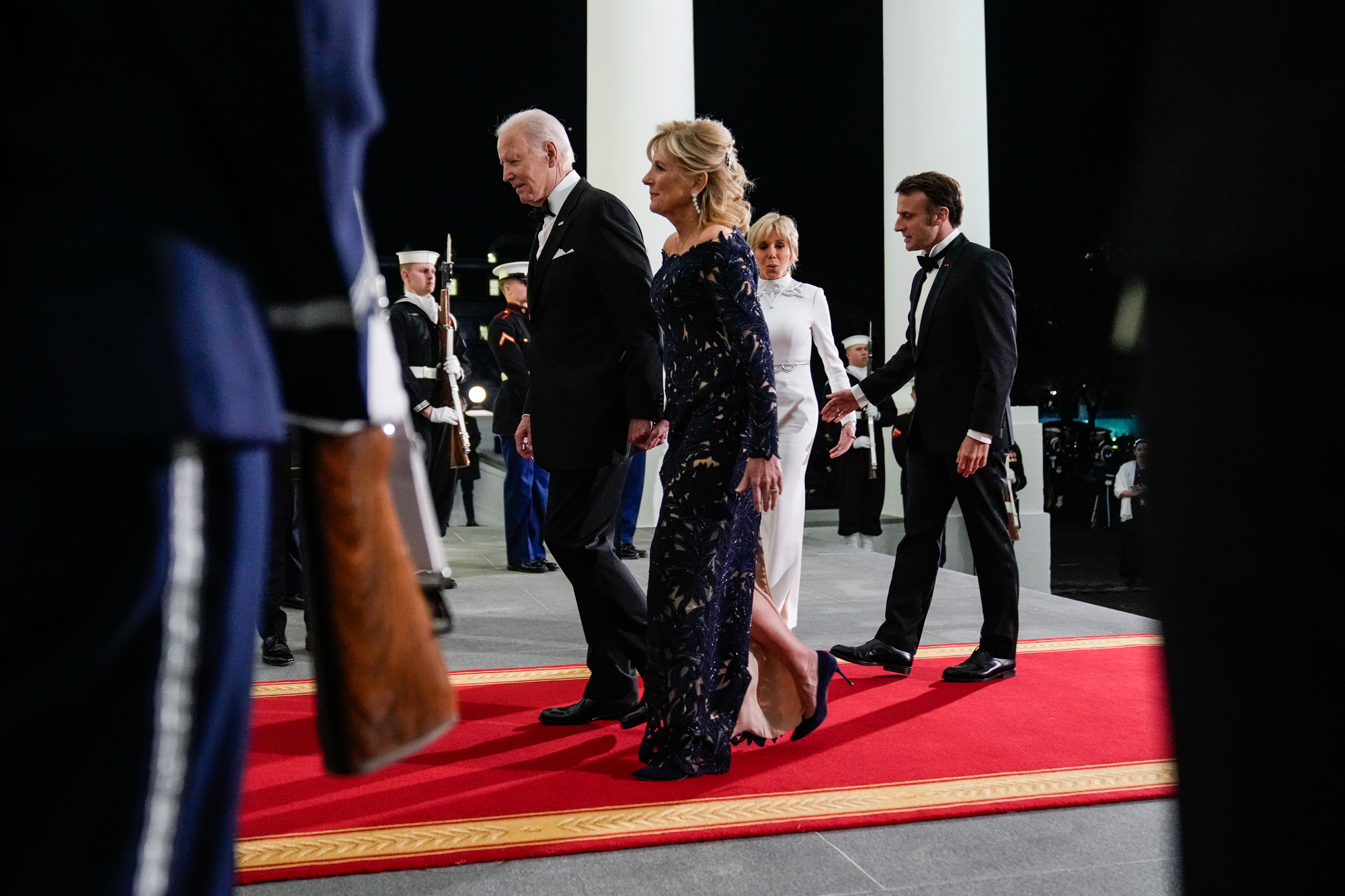 The ritzy affair comes after a long day of diplomatic discussions, in which the foreign leaders held a lengthy bilateral to discuss thorny subjects like the energy crisis in Europe, the Inflation Reduction Acts impact abroad and Russias ongoing invasion of Ukraine. The leaders then held a joint press conference with more than a hundred members of the American and French press in the East Room of the White House.

But Thursday night, any growing tensions got set aside in favor of bottles of bubbly with notable French Americans, lawmakers and big names from the business and arts world.

Early arriving guests included late-night TV host and Batistes former boss Stephen Colbert and Veep actress Julia Louis-Dreyfus, who was asked by reporters as she was walked by whether she had ever attended a state dinner before. (She had!)

Two of the presidents children, Hunter Biden and Ashley Biden, as well as his sister, Valerie Biden, were expected to attend.

The guests will dine on butter-poached Maine lobster, caviar and beef with shallot marmalade just a few of the menu items. The spread will also include an American Artisanal Cheeses course and finish with an orange chiffon cake and crème fraîche ice cream a fancier spin on Bidens favorite dessert.

Its Macrons second state dinner in a four-year span he was also former President Donald Trumps first in 2018. Trump, who wasnt as keen on holding such events, had two during his presidency. He had a third planned for April 2020 to honor Spains king and queen, but the event was canceled due to the pandemic.

But at this point in Barack Obamas presidency, he had held six state dinners.

One such high-profile dinner during the Obama administration was also the stage for a highly-publicized security stumble. A Virginia couple, both aspiring reality TV stars, managed to crash Obamas first state dinner and meet the then-president in 2009, leading to a flood of D.C. social criticism and a full review of the breach.

Olivia Olander contributed to this report.

Memphis Driver Shooting at People While Recording on Facebook,...

Cameo lays off almost a quarter of its staff,...

Police: Mall of America on lockdown after reported shooting

The Fed is bushwhacking through uncharted territory

Liz Truss’s next job is to turn around Tory...

US sanctions on China could extend to biotech, official...

Trying to fix an error on your credit report?...

A Light in the Darkness

‘Dr. Doom’ Nouriel Roubini warns the next decade could...

Deterrence and Assurance on the Korean Peninsula

Global brands are taking note of Africa’s music and...

Will Apple Ever Go Back to In-Person Product Launches?

Ireland announce three-match tour of the Netherlands next month

Wisear is building neural earbuds that skip tracks when...

US repatriates Guantanamo prisoner back to Afghanistan after court...

Tesla’s Week to Forget Is the Anchor Weighing On...

This creepy Android flaw can detect your identity and...

‘I Was a Trans Firefighter. But I Kept It...