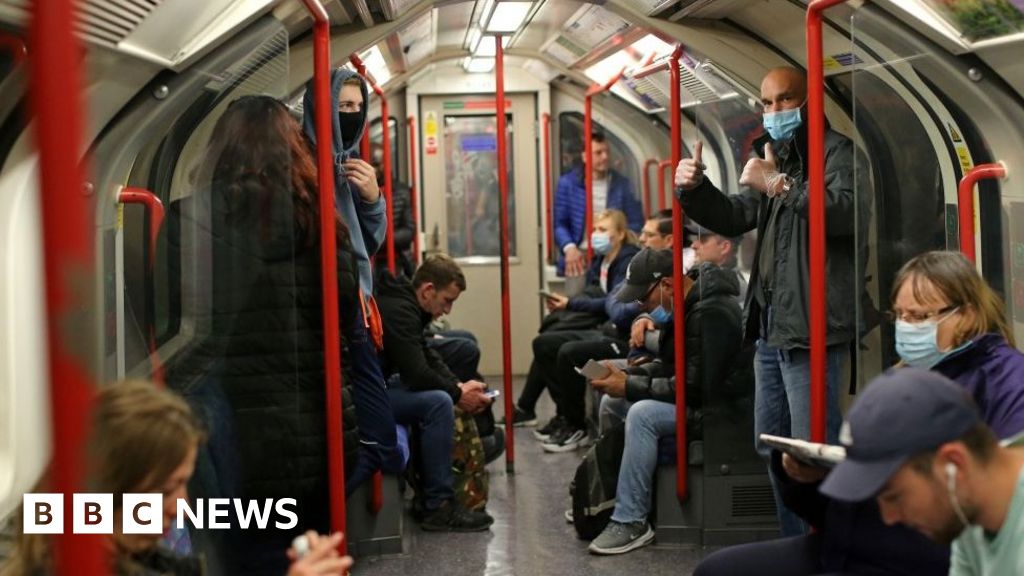 Free Tube travel on New Year’s Eve has been scrapped for the second year in a row due to the “catastrophic impact of the pandemic” on finances, Transport for London (TfL) has said.

Services will still run through the night but usual usual fares will apply.

It is the second year of no free travel but last year’s celebrations were restricted due to the pandemic.

This year a ticketed celebration at Trafalgar Square replaces the annual fireworks display on the Thames.

The free travel at new year is often funded by a sponsor but one has not been found for this year.

TfL said: “Following the catastrophic impact of the pandemic on TfL’s finances, TfL unfortunately will not be able to offer free travel on New Year’s Eve.

“Services on the transport network will run through the night, ensuring that people can enjoy everything London has to offer and get home safely.”

Transport bosses are seeking £500m to keep services running until April, plus £1.2bn for 2022/23 and plus more than £1bn a year for major upgrades and maintenance.

Image caption, About 300 drones were used in the display to create images in the sky during the 2021 celebrations

Tony Devenish, Conservative London Assembly member, said it was “no surprise” the mayor of London Sadiq Khan had struggled to find a sponsor for free travel.

He said: “The West End desperately needs the mayor’s help to get visitors back into central London.

“Sadly, Khan’s acting like a Grinch by cancelling our city’s fireworks display and failing to reopen the Night Tube in full.

“His decision to scrap the traditional free Night Tube on New Year’s Eve and Day is yet another hammer blow to our city’s recovery.” Tom Brady’s return game against the New England Patriots came down to the wire but it was the Tampa Bay Buccaneers who came out with the narrow 19-17 victory.
Read more

The Minority Business Development Agency (MBDA) could provide a lifeline for these small businesses and help build a more equitable economy.
Read more

Booze and Cigarettes, the Sunny Uplands: Beyond Brexit

States are taking various approaches to keeping track of COVID-19 vaccine recipients in the absence of a national database.That's led to a variety of methods for providing residents with documentation should they l...
Read more

How Dead by Daylight  Became the Ultimate Game for...

Behaviour Interactive fleshed out a creepy cast of characters by negotiating rights to everything from 'Saw' to 'Silent Hill.'
Read more

A COVID-free “cruise to nowhere”

Kipsta, real name Alex, became known for sharing videos with his subscribers from his hospital bed. He thanked fans for their support hours before going in for his transplant.
Read more

Biden: Sarah Palin coined the mispronunciation of my name

Halo Infinite is thankfully getting more multiplayer modes before...

Halo Infinite's multiplayer will see fan-favorite modes return before the end of the year.
Read more

Krispy Kreme is offering a sweet incentive to get the COVID-19 vaccine - a free doughnut every day of 2021 to Americans who can prove they've gotten their shots.The famed doughnut company announced Monday that any...
Read more

President Biden is expected to address the state of race relations in the U.S. during his speech to a joint session of Congress. The president has already called on Congress to pass the George Floyd Justice in Policing Act, which would ban chokeholds, make it…
Read more

In our Ooma Office review, we’ll dive deep into this VoIP service to help you decide whether it’s the best choice for your business.
Read more

A top Senate Republican said Sunday that a smaller infrastructure package focusing on physical needs such as roads and bridges would quickly pass the upper chamber and represent an "easy win" for the Biden administration....
Read more

"She will do a far better job than RINO Governor Doug Ducey—won't even be a contest!" Trump said after endorsing Kari Lake.
Read more

Illinois on Thursday recorded a record number of new COVID-19 cases as cases in the U.S. surge with the spread of the omicron variant.The Illinois Department of Public Health (IDPH) confirmed 18,942 cases on Dec. 2...
Read more

Coming to a location near you: A brick and...

Even as it forges a new identity, Meta Platforms, the parent of Facebook, may soon open a brick-and-mortar shop featuring Oculus Quest, Portal Gadgets, augmented-reality sunglasses being built in collaboration with Ray Ban.
Read more

The Biden administration on Thursday announced it would line up more than 323,000 borrowers with a total and permanent disability (TPD) for $5.8 billion in automatic federal student loan forgiveness.The Education Department announced that it would...
Read more

Sinn Féin seeks a recall of the NI Assembly after the EU's plan for a reduction of post-Brexit checks.
Read more

Netflix has raised its subscription prices in the U.S. and Canada, the company announced Friday. The standard plan i...
Read more

Kyle Rittenhouse is set to speak at the conservative Turning Point USA conference starting on Saturday."There's a lot of people that want to hear what he has to say and there's a tremendous amoun...
Read more

Medicare premiums to jump in part due to pricey...

Seniors on Medicare will have to pay more than $20 more per month extra in premiums next year, a large increase that officials in part attributed to possible coverage of a pricey and controversial new Alzheimer's dr...
Read more

Samsung Galaxy S21 Ultra deals will be the perfect alternative to the cancelled Galaxy Note 21 with similar specs and design.
Read more

No Best Buy PS5 restock in over three weeks...

It's been 23 days since the Sony console has been in stock at Best Buy. The reaction is as you'd expect.
Read more

Greg Gutfeld: The media is egging on citizens to...

Organizing Is More than Campaigning

Part One of a two-part look at lessons the right can learn from the D.C. DSA’s Stomp Out Slumlords tenant organization efforts. The post Organizing Is More than Campaigning appeared first on The American Conservative.
Read more

How long it’s been since the last PS5 restock...

Our PS5 restock prediction that there'd be an 'October deadline' was in fact accurate. Here's what's next.
Read more

Nicholas, which has strengthened to a hurricane late Monday, could dump as much as 20 inches of rain. Janet Shamlian reports.
Read more

While many workers deemed essential in their respective states have already pandemic hazard pay or hero pay, there are thousands more are still waiting for the same financial pat-on-the-back
Read more

One of the few clues to the soldier's identity is a scrap of paper with the name Keller Len Scott written on it.
Read more

A Chicago officer on Wednesday night accidentally shot and wounded two colleagues while they were investigating a homicide.Chicago Police Superintendent David Brown said during a press conference...
Read more

Texas officer shot in back during ambush attack needs...

Harris County Constable Precinct 4 Deputy Darryl Garrett, 28, had both of his kidneys and his gall bladder removed after getting shot multiple times in the back, his fiance told a local news outlet.
Read more

England fast bowler James Anderson is set to miss the first Ashes Test against Australia at the Gabba.
Read more

A new report is expected to reveal what the US military knows about unexplained flying objects.
Read more

What’s the next big thing for fitness wearables&quest;

The next generation of activity trackers will do way more than just count your steps.
Read more

White House adviser sees ‘a lot of momentum’ for...

On his 38th birthday, Sebastian Francisco Perez, an immigrant from Guatemala, played chess with his nephew
Read more

R. Kelly is now in the third week of his sex trafficking trial. The R&B singer has been accused of leading a criminal enterprise that sexually exploited women, girls and even boys.
Read more

Two American missionaries were among six people killed Friday when a private plane crashed in Haiti, according to reports.
Read more

U.K. retailers embraced the government’s move to ease restrictions after omicron hijacked footfall over the holiday season, saying they hope customers will swiftly return to their stores.
Read more

House Republicans are expected to vote on Friday to elevate Rep. Elise Stefanik to the No. 3 leadership position of conference chair after ousting Rep. Liz Cheney from the role following her repeatedly calling out former President Donald Trump's "Big Lie" tha…
Read more

Microsoft Tests Its Own Corporate Metaverse for Early 2022...

How film-school reject Khadar Ahmed is winning prizes and...

Next play: Brees joins NBC Sports after retiring from...

Ship Briefly Stranded in Suez Canal Before Being Freed

A ship was briefly stranded in the southern part of the Suez Canal on Thursday, before being freed.
Read more

In addition to the presidential election, we are tracking the competitive Senate and House races down the ballot. Julianna Goldman joins "CBS This Morning" with a breakdown of what is at stake for Congress.
Read more

Border Patrol agents are coming across a number of U-Haul trucks and other large vehicles packed with migrants in sweltering heat and deadly conditions as they continue to tackle a spike in migrants trying to enter the U.S. illegally.
Read more

The UK is recovering faster than its major competitors from Covid says the chancellor.
Read more

Ezinma: How Beyoncé’s violinist is tearing up the classical...

The musician is pushing classical music forward with her fusion of orchestral music and trap beats.
Read more

Another Winter LNG Cargo Appears to Divert to Europe...

Traders may have diverted another cargo of liquefied natural gas to Europe instead of China amid the continent’s energy crunch.
Read more

The Surface Pro 7 is on sale for just...

We've spotted the Surface Pro 7 on sale for a record-low price of $599 in a fantastic back to school deal at Best Buy.
Read more

The Second Amendment is not about guns — it’s...

Afghanistan: Hamid Karzai says the Taliban are his brothers