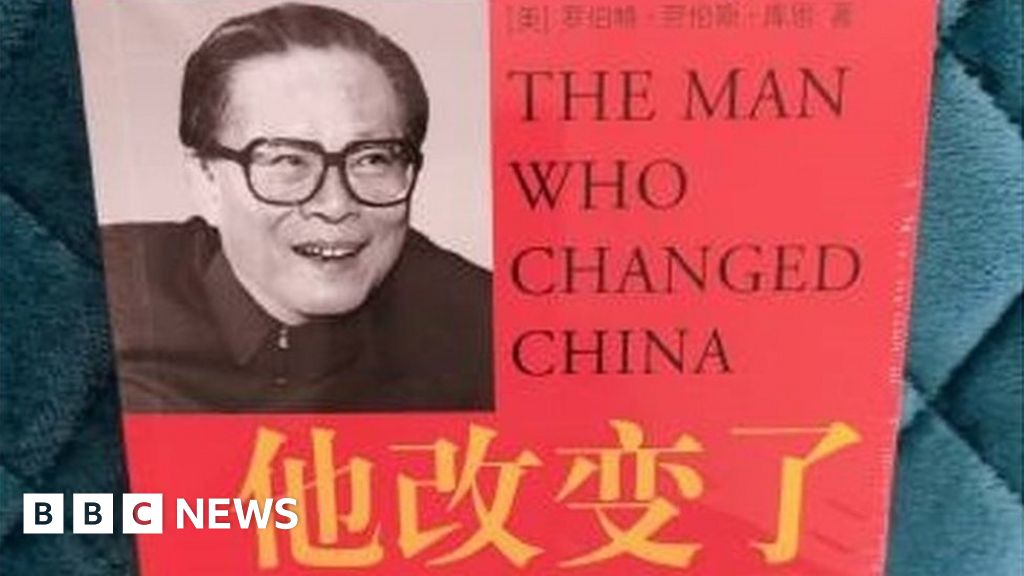 Toads, spectacles and the word “grandpa” figure in posts by people in China as they remember the late Chinese leader Jiang Zemin and try to avoid the censors.

Members of China’s top leadership have never had individual accounts on local social media platforms and posts about them are routinely heavily filtered, to avoid people leaving messages critical of the Communist Party government.

As a result, there has long been intense censorship of Jiang Zemin online.

His death coincides with a wave of protests against the authorities’ “zero-Covid” policy – an outpouring of frustration over frequent lockdowns, and some have chanted anti-government slogans.

Media posts about Mr Jiang’s death show that millions of social media users have left comments – most of which are positive.

But only a handful are available to view, and a search on Sina Weibo for “Jiang Zemin” only shows some 250 posts, all from government media accounts.

The Communist Party appears to want people to see comments from users wishing him “a good journey” to the afterlife. The majority of visible posts include a candle emoji, which is a common way of commemorating someone who has died.

For users to talk at a more personal level about what he meant to them, they have had to coin nicknames.

Historically, toad-related nicknames have become popular ways of referencing him, like “Uncle Toad”.

While these originally were a way of mocking or criticising the leader – much as there are people who compare President Xi Jinping to Winnie the Pooh – in recent years there has been a phenomenon of “toad worship” from Jiang fans. Users have posted pictures of amphibious creatures to speak about him nostalgically.

For years, social media platforms have tried to clamp down on toad- and frog-related messages. Very few such messages can consequently be found on the platforms today.

But some have circumvented censorship today by making croaking sounds to leave messages about the former leader.

“Ribbit. Rest in peace,” says one user, for example.

Knowing that words that allude to Mr Jiang will likely be filtered, some web users have simply let pictures speak to mark his legacy.

In the eastern city of Yangzhou, where Mr Jiang was born, social media users have posted floral tributes left outside historic buildings, apparently for Mr Jiang.

Some have posted a book cover that he features on, titled: “The man who changed China”.

Images are also to be found of Jiang Zemin’s large, trademark glasses and the phrase “Stay young, stay simple”. Some have posted emojis of sunglasses as a way of referencing him.

As posts that contain the roman script rather than Chinese characters are less likely to be censored, many have posted simple messages saying “RIP”, or “Rest in peace”.

However, a regular theme in such messages has been people mourning not just the end of his life, but the end of a bygone era.

“RIP, looking back it was the best era; an era full of hope,” says one user.

One goes further saying: “I will miss you, because things are so bad now. RIP.”

“Nucleic acid tests and quarantine cabins should not be the backdrop of this country, but self-confidence and openness. RIP,” says one, posting a picture of Mr Jiang smiling with former western leaders.

Image caption, Many perceive Jiang represented a time when China and the West were closer

Some have acknowledged that Jiang’s animated expressions meant he was sometimes a figure of fun.

“When I was in high school, I just liked to send memes [of Jiang] to my friends,” says one Weibo user. “It is only now that I understand and long for an era when things were gradually opening up, and everyone’s eyes were shining.”

Others have acknowledged that they’ve found they feel “neither happy nor sad” to hear of Jiang’s death. “As a politician, he was complicated, multi-faceted, and contradictory. It will be history that evaluates his rights and wrongs.”

With the leader of the country such a strong presence in people’s lives, a wildly popular nickname for Jiang when news broke of his death was “Grandpa Jiang”. But a search for this today brings up the message “According to relevant laws, regulations and policies, results for ‘Grandpa Jiang’ cannot be displayed.”

“Grandpa”, however, is not censored, so floods of user comments about “Grandpa Jiang” can be seen.

While many have posted how they feel sad to hear about the death of their “grandpa”, some appear to have taken the word “grandpa” – which also means an older man in Chinese – as a metaphor for “president”.

Users appear to have done this to make comments critical of the country’s current leader, President Xi Jinping.

“Everyone misses him so much, will a certain ‘grandpa’ be jealous?” one asks.

US to charge man suspected in assassination of Haitian...

In election, support for abortion rights was about much...

Summer launches to let you ‘try before you buy’...

Joe Biden’s COVID Is ‘Karma’ for His Cancer Speech:...

Attorney: Man was defending himself when girl, 9, was...

Aluu 4: Ten years from the lynching that shocked...

Tax refunds could be a lot less this year

Why are bakers’ fortunes on the rise?

Giannis Antetokounmpo threw himself an alley-oop off the backboard...

The Gambian man who took on a tyrant and...

Snap is shutting down its desktop camera app that...

Software vendors are hiking prices, but don’t be fooled...

Russia-Ukraine live updates: US to ban Russian flights from...

US Army to likely miss recruiting goal of new...

At least 85 children killed so far in Ukraine...

Proper raises $4.3M seed round to help other fintechs...

FEC slaps down Dem Rep. Swalwell’s use of campaign...

How the new PlayStation Plus stacks up against Xbox...

‘Death Stranding’ has been played by 10 million people...

Microsoft is hiking the price of first-party Xbox Series...

Met Police special constable 'raped woman at roadside'
It's official: This year's bird flu outbreak is now the worst in...