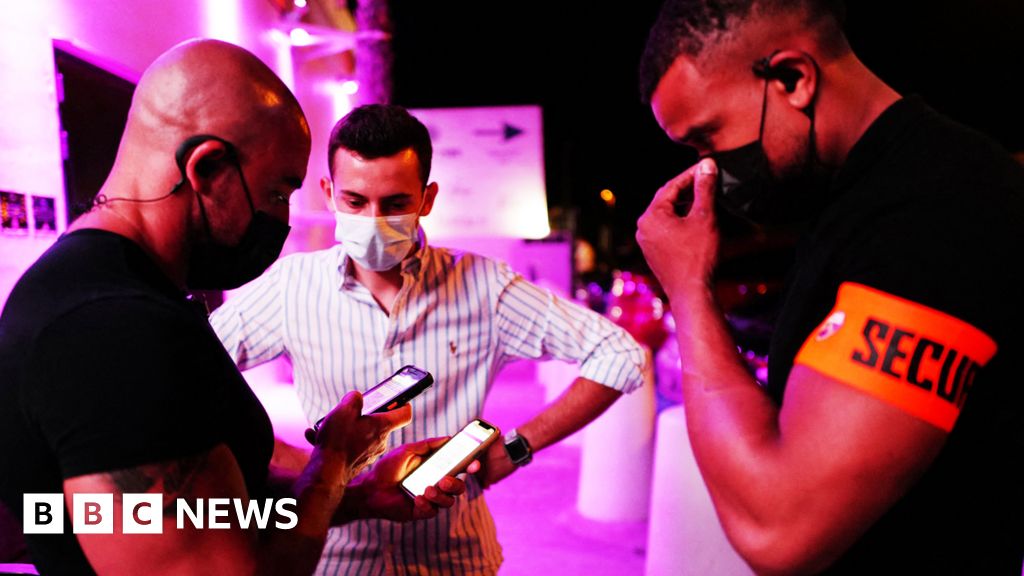 Image caption, Covid certificatoin will be required at nightclubs and licensed venues.

Northern Ireland’s Covid-19 certification scheme, which requires people to show proof of vaccination or a negative test to enter some venues and events, comes into effect today.

However, there is a two-week grace period before fines are imposed on venues that fail to comply.

Ministers agreed to the plan to help curb the spread of Covid-19.

Businesses have said there is a lack of clarity around the scheme and how they should enforce it.

On Friday, Health Minister Robin Swann said unlicensed premises like cafes would be exempt from the rule.

The regulations will be laid in draft form on Monday, but will require assembly approval.

From 29 November, either proof of vaccination, a negative lateral flow test or a positive PCR test for access to:

There will be no enforcement until 13 December to allow for the scheme to be “bedded in”, the Department of Health said in a statement last week (DoH).

The department said the phased approach followed feedback from the retail, hospitality, tourism and events sectors.

“There is also evidence, from several studies worldwide, that even when people get infected, if they are vaccinated they are less likely to transmit it to others,” it continued.

“Hospitality, leisure and tourism businesses have had an absolutely torrid time over the past 20 months.

“Without adequate financial support in place quickly, jobs will be in jeopardy. Indeed, many businesses are already seeing cancellations of bookings, so this, and speculation about closures and lockdowns, is already having a negative effect on trade.”

The scheme has also been met with resistance from some within the executive.

Economy Minister Gordon Lyons said the scheme was “ill thought out” and unenforceable.

His party, the Democratic Unionist Party (DUP), voted against bringing in Covid passports.

Last week, he urged other parties to show “political bravery” and reverse the decision. Kyrsten Sinema and when confrontation culture goes too far

The video is striking: Protesters angry about Arizona Democratic Sen. Kyrsten Sinema's opposition to the $3.5 trillion social safety net package currently being considered by Congress follow her into a bathroom to make their point -- filming Sinema as she ent…
Read more

As Mohamed Salah reaches 100 Premier League goals, BBC Sport looks back at some of his best goals and the key stats of how the Liverpool forward reached the landmark.
Read more

In a disturbing look at hidden dangers on highways across the country, a “CBS This Morning” investigation reveals how bus and truck drivers can hide medical conditions that should keep them off the road. Kris Van Cleave reports on the federal oversight of com…
Read more

Ariana Grande’s improvised lyrics in ‘Don’t Look Up’ are...

Amid the Florida building collapse search and rescue, we...

John Dickerson reflects on the heroism of first responders who rush to endanger their lives in the hope of saving the lives of others.
Read more

Republicans in Congress folded like a deck of cards in the face of the pandemic and they are still behind the ball. The post The GOP Hasn’t Suddenly Discovered Its Spine appeared first on The American Conservative.
Read more

Scholz to Germans: Let’s all help to defeat COVID...

Toby Rice says no one anticipated the current spike in prices, and the U.S. producer has unwound some hedges for this year and 2022.
Read more

Stay on top of the revolutions reshaping the auto world — from EVs to self-driving technology — by signing up for Hyperdrive’s newsletter  here.
Read more

Hospital pressure to continue for a month, health minister...

The prediction comes as a further eight deaths and 2,317 new Covid cases are recorded in Wales.
Read more

The former Transportation secretary received the payment in 2012.
Read more

While it’s always good to keep your expectations in check, here are five Nintendo Switch games we want to see during September’s Nintendo Direct.
Read more

On the Road: Waitress receives the tip of a...

As part of our continuing series "On the Road," Steve Hartman meets Melissa Mainier, a Pennsylvania waitress who, thanks to a generous tipper, paid off her entire nursing school debt.
Read more

Ingraham: Biden administration ‘lost in their delusions and missing...

Ingraham rips the Biden administration: 'everything he and his party have touched has turned bad'
Read more

Primetime Emmys are coming up soon, but some shows cleaned up early at the Creative Arts Emmys as well. Here’s the whole list. – Entertainment Weekly
Read more

What’s in, and what’s out, as Biden offers scaled-back...

After months of talks with Democratic lawmakers, President Joe Biden is outlining a $1.75 trillion framework to support families and education as well as protect against global warming
Read more

A man who is accused of shooting two people at a wedding in New Hampshire plead guilty Wednesday to assaulting his former lawyer, ...
Read more

Want more than one Echo Show 8? This Amazon...

A Texas man was sentenced to prison after he falsely claimed on social media that he paid someone with the coronavirus to lick items at a grocery store.The Justice Department ...
Read more

Biden said "June should be a month of action on Capitol Hill" to pass voting rights legislation.
Read more

A global fight looms over Kratom, a possible opioid...

The U.S. government has twice tried to classify kratom as a controlled substance, but public outcry and pushback from Congress thwarted those efforts.
Read more

Getting the US government out of human trafficking for...

Every senator, every House member, and the president should support my bill to keep the U.S. government out of the sad and disgusting business of human trafficking with Americans’ hard-earned tax dollars. We’re the United States of America.
Read more

The changes touch on every aspect of the Capitol Police’s work.
Read more

A pro-democracy group says the Hong Kong government is arbitrarily labeling it a foreign agent, making it subject to prosecution under a tough national security law
Read more

A Minnesota COVID-19 patient was flown to a medical facility in Texas over the weekend after a judge ordered doctors to keep him on a ventilator, ...
Read more

No babies in Parliament: UK lawmakers outraged by infant...

Why water levels in Southwestern states have some experts...

Water levels in major bodies of water in the Southwest are approaching historic lows as the drought is exacerbated by a heatwave amid a dry season.
Read more

After weeks of the jackpot growing, there was one big winner on Friday night.
Read more

India's benchmark Sensex crossed the 60,000 level for the first time on Friday, driven by tech and private bank stocks, as analysts pointed to easing fears over economic damage from a possible third COVID-19 wave.
Read more

The device, traditionally used as a way of drawing water, is to be used by a council for generating electricity.
Read more

In 2006, Scott Pelley traveled to the Arctic to speak with scientists about some of the effects that man is having on the world’s climate.
Read more

The video shows two men watching as the woman slumps to the sidewalk and her attacker hovers nearby.
Read more

It beat Chinese Korean War epic The Battle of Lake Changjin to be the highest grossing film of 2021.
Read more

Coronavirus cases are surging in Nevada as the federal government is preparing to send help to the state for vaccination efforts.The state’s average new cases a day, hospitalizations and positivity rate are all at their highest levels since February...
Read more

Asbury Park, the New Jersey shore town where Bruce Springsteen rose to fame with songs about hardscrabble blue-collar life, had its credit rating raised one grade by Moody’s Investors Service, thanks to new residential and commercial development.
Read more

To Make the Perfect BLT, Rethink Two of the...

Portugal defender Joao Cancelo has been replaced by Diogo Dalot after testing positive for Covid-19, two days before their Euro 2020 opener.
Read more

Few elected officials in California have seen their relationship with voters transform as much as the Los Angeles Sheriff.
Read more

Douglas Connell resigns during an investigation into donations at The Prince's Foundation.
Read more

A majority of Arizona voters support election reform and are in favor of reforming the Senate filibuster to pass such a bill, according to a new poll.The survey, conducted by the left-leaning Pub...
Read more

International Friendship Day is coming up on July 30th! To mark the occasion, Hong Kong Disneyland Resort is celebrating our Sensational Six with limited-time experiences, a new show and exclusive merchandise. Let’s take a look at what’s happening …
Read more

Covid-19: Palace urges crowds not to gather, and infections...

The Georgia Republican took aim at a provision in the infrastructure deal that provides funds for electric vehicles.
Read more

Israel and Hamas cease-fire holds after 11 days of...

The two sides agreed to halt their respective airstrikes and rocket attacks as pressure mounted from Washington for a truce.
Read more

LeBron James and Isaiah Stewart are ejected for causing a fracas as the Los Angeles Lakers come from 17 points down to beat the Detroit Pistons 121-116.
Read more

This much-loved Windows 10 app is set to get...

No need to wait for a Windows 10 update to get the most out of Notepad anymore.
Read more

A Teacher’s Summer is No Cakewalk

All that free time is asking for summertime sadness, or for a laugh: the sorrows of Kurt Hofer. The post A Teacher’s Summer is No Cakewalk appeared first on The American Conservative.
Read more

The House committee investigating the January 6 attack on the US Capitol has subpoenaed and obtained records of phone numbers associated with one of former President Donald Trump's children, Eric Trump, as well as Kimberly Guilfoyle, who is engaged to Donald …
Read more

Hospitals Pushed to Brink as Delta Sparks Hunt for...

U.S. hospitals are desperately hunting for medical staff as the Covid-19 wave that’s pushing some systems to their breaking point in the South spills into the rest of the country.
Read more

Good morning and welcome to Fox News First. Heres what you need to know as you start your day Biden warns unvaccinated Americans...
Read more

German soccer player Leon Goretzka sent a message in support of gay rights after scoring his national team's second goal during a match against Hungary, which has faced growing backlash to a new law see...
Read more

Business Is Booming For Avocados (Radio)

Softline Holding Ltd., an IT services and cybersecurity provider founded by Russian businessman Igor Borovikov, set a price range for its initial public offering in London and Moscow that values the company at as much as $1.93 billion.
Read more

The 'map nerds' who are building a national archive