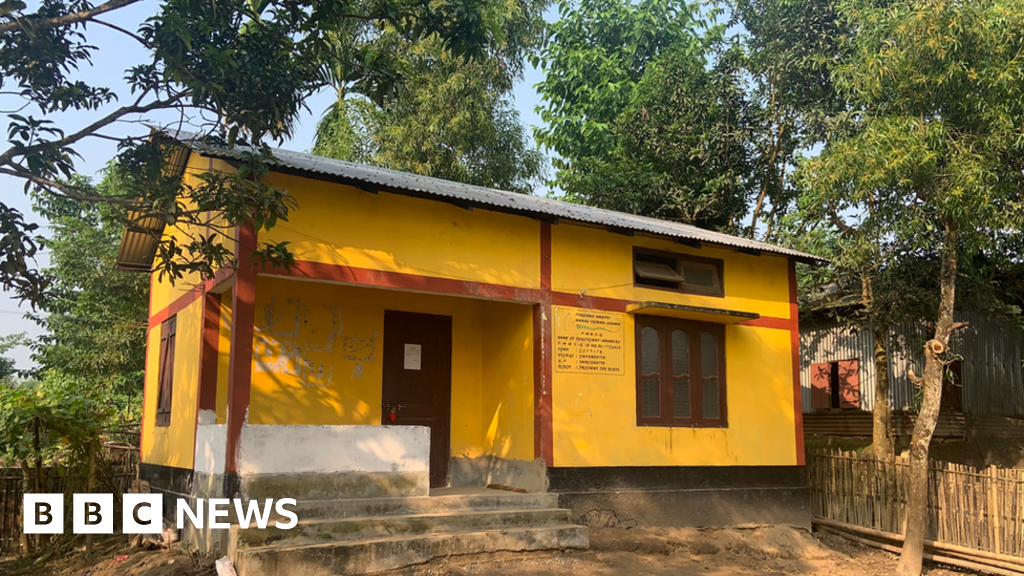 Mohiton Bibi has been waiting for days for her son to return from jail.

Mohar Ali was arrested a month ago after he opened a small museum in his house in a hamlet in Goalpara district in the north-eastern Indian state of Assam. The museum, he said, was dedicated to the culture of ‘Miyas’ – Bengali-speaking Muslims in the state.

Mr Ali, who is the leader of a local political party, spent around 7,000 rupees ($86; £71) to set up the place, which mainly displayed some agricultural tools and garments.

But two days later, local authorities shut the museum down. They also sealed Mr Ali’s home, alleging that he had wrongly used the house – which was allotted to him under a government scheme – for commercial purposes.

The police also arrested Mr Ali and two others who had helped set up the museum.

They have said that the case against them was not connected to the museum and was instead due to their alleged links to two terror groups. The three men, who have been charged under a draconian anti-terrorism law that makes it almost impossible to get bail, have denied the accusation.

The arrests have shocked Assam’s Bengali-speaking Muslim community, who say they are bewildered.

“What exactly is his crime?” Mr Ali’s mother asks, her eyes welling up.

Critics say the arrests are the latest in a long line of attempts to marginalise the community in Assam, a complex and multi-ethnic state where linguistic identity and citizenship are the biggest political fault lines.

The state – residents include Bengali and Assamese-speaking Hindus, a medley of tribespeople and Muslims – has seen an anti-immigration movement against “outsiders” from neighbouring Bangladesh for decades. Bengali-speaking Muslims, in particular, have often been accused of being undocumented immigrants.

Since coming to power in 2016, the governing Bharatiya Janata Party (BJP) has rallied its vote base of Hindus and tribal communities by announcing policies that critics say are discriminatory towards Muslims. Several politicians, including current chief minister Himanta Biswa Sarma, have also targeted them in speeches.

After returning to power in 2021, the BJP government forcibly evicted thousands of people in a controversial drive against illegal encroachments – most of those affected were Bengali-speaking Muslims. Earlier this year, the government also approved the classification of five Muslim groups as “indigenous Assamese” communities, raising fears of further marginalisation of others.

“Muslims of Bengali origin have become a soft target of politics,” says Dr Hafiz Ahmed, a scholar who works with the community.

“The idea is to show to the majority [population] that Miya people are not a part of the Assamese society – they are enemies.”

Senior BJP leader Vijay Kumar Gupta, however, denied this and said that “others” were trying to “create a dispute” between communities.

“A museum is meant to preserve the cultural heritage of a community, but nothing like that is happening here,” he said.

Across South Asia, the word Miya is used as an honorific for Muslim men.

But in Assam, the word is considered pejorative and used to describe thousands of Muslim peasants who migrated from parts of eastern Bengal that are now in Bangladesh. Assam shares a nearly 900km (560-mile) long porous border with the neighbouring country.

A vast majority of these migrants settled in the chars – the shifting islands along the lowlands of the Brahmaputra River – where people from other communities also stay.

Residents of chars are mostly poor farmers and daily wage workers whose lives and livelihoods are dependent on the river’s shifting moods.

They also face discrimination, and are often portrayed as “infiltrators” who are taking over the jobs, land and culture of the Assamese-speaking population and tribespeople.

But over the years, many in the Bengali Muslim community have embraced their history, and tried to reclaim the term Miya as a distinct marker of their identity.

Image caption, There are more than nine million Bengali-speaking Muslims in Assam

The Miya museum in Goalpara, set up in a small room, housed a few traditional agricultural tools, fishing gear made of bamboo, and a gamusa – the traditional hand-woven garment of Assam – all of which, Mr Ali said, was part of the “culture of Miya people”.

But many BJP leaders accused him of trying to create divisions in society and said that the artefacts represented Assamese identity and not that of the Bengali-speaking Muslim community.

“Is there any community by the name of Miya?” chief minister Sarma said last month, hours before the museum was sealed.

The idea of such a museum at a prominent cultural centre was first mooted in 2020 by former Congress leader Sherman Ali Ahmed – who has often vociferously advocated for the community – but it faced vehement opposition from Mr Sarma’s government.

Before that, in 2019, some poets ran into trouble for writing fiery, resistance poetry – which they called “Miya poetry” – in the community’s dialect instead of in standardised written Assamese. Ten of them were charged with “promoting enmity between groups” on religious grounds.

Sherman Ali Ahmed told the BBC that he did not think it was right for Mr Ali open the museum in a government-granted house, but that his punishment was excessive.

“He didn’t commit any major crime, but the government took strict action against him and others to scare the community,” he says.

Dr Ahmad, the scholar, alleged that the government was trying to exploit the state’s demographic complexity and play on the anxieties of Assamese people – who have long feared they will lose their identity to immigrants – by polarising the environment.

Meanwhile, people in Mr Ali’s village are still rattled by the arrests. Most of them refused to talk about the museum, fearing more trouble.

Others said the controversy had nothing to do with their lives. “We don’t need a museum, we need jobs, roads and electricity,” said Shaheed Ali, a resident.

Dr Ahmad says that even though his personal stand was that the museum was ineffectual, the community had a right to preserve their culture.

“After years of persecution, the Miya Muslims are trying to carve out their own space,” he says.

“How can a community exist without its culture?” The Hill’s Morning Report: Can Ukraine and Russia make...

Cody Fisher stabbing: Birmingham nightclub may be forced to...

Veteran anonymously paid for people’s medicine for a decade

What loss of Ozzie Albies means for Braves in...

Homes for Ukraine: Visas for 570 Ukrainians to flee...

Myanmar junta hits out at critics, thanks neighbours for...

World Eyes US Midterms for Hint of a Trump...

Spain’s truckers get gas price cut but some keep...

The EPA May Extend the Use of Pesticides that...

James Webb telescope captures the hidden features of a...

Bring the people back into the People’s House

Outside firm to review Louisiana State Police after death...

2 missing in Virginia after group went over James...

Greece: 29 people picked up from boat in distress

COVID-19 booster drive is faltering in the US