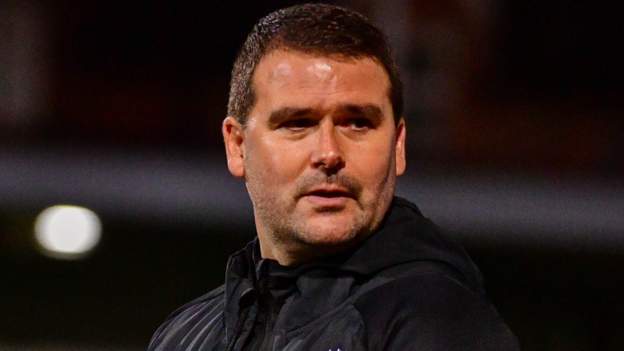 Healy pointed out that there have been no internationals at Windsor Park in October and November and wondered whether “maybe some people have taken their eye off the ball”.

The Irish Football Association is responsible for maintaining the pitch at the National Stadium.

“There have been no international games in October and November and maybe some people have taken their eye off the ball,” Healy told BBC Sport NI.

“You certainly want it in a better state than it was today.”

Healy said that the National Stadium pitch should be maintained to the “same standard” for both internationals and Irish League games.

“It’s been disappointing and it’s been gradually getting worse over the last number of weeks,” added the Blues boss.

“You want two teams going at it and playing good football. I thought it was poor the other night against Larne but again you can’t sometime blame the pitch for a lack of quality from both sides in the final third.

The Irish Premiership champions were without seven injured players in Saturday’s game and Stephen Fallon looks to have been added to the list after twisting his knee in the contest.

“I’m not a medical expert and would never proclaim to be but Stevie Fallon went down today and I think he basically slid on the surface and jarred his knee,” added the Linfield boss.

“We play Carrick at home next Saturday and then we’re off it for a couple of weeks so hopefully some kind of improvement can be made [to the pitch].”

The Irish FA has been asked if it wishes to respond to Healy’s comments.

Linfield’s draw means they are five points behind leaders Larne, who suffered a second successive defeat as they lost at home against Coleraine, while the Crues are ahead of the Blues on goal difference in fourth spot.

Why the Fallout series desperately needs Obsidian’s help to...

Apple M1 chip has an ‘unpatchable’ security flaw, but...

Monmouth County is not in Central Jersey

At least 10 injured, dozens of homes destroyed as...

‘Nothing has changed’: Frustration builds as cannabis reform stalls

Smartphones Are a Lifeline for Ukrainian Refugees

Pennylane wants to overhaul the accounting tech stack in...

Lilly’s Donanemab Fails to Get Early FDA Approval for...

U.S. will train Ukrainians on Patriot system in Oklahoma...

Jan. 6 Committee Sees Breakthrough, Will Get Trove of...

Opaper takes the friction out of social commerce –...

Carvana acquires Adesa US auction business for $2.2B to...

Score an Amazon Halo fitness tracker for only $50,...

Michelle Yeoh would not be played off during Golden...

McCarthy rolls out House GOP ‘Commitment to America’ ahead...

The New York romance of Japan’s former princess and...

This Outlook email update will give your calendar a...

Carnival Sees ‘Dampening’ in Cruise Bookings for Second Half...

Biden arrives at the UN ‘with the wind at...

Donations poured in and volunteers who rushed to help:...

Airbnb has a plan to fix cleaning fees