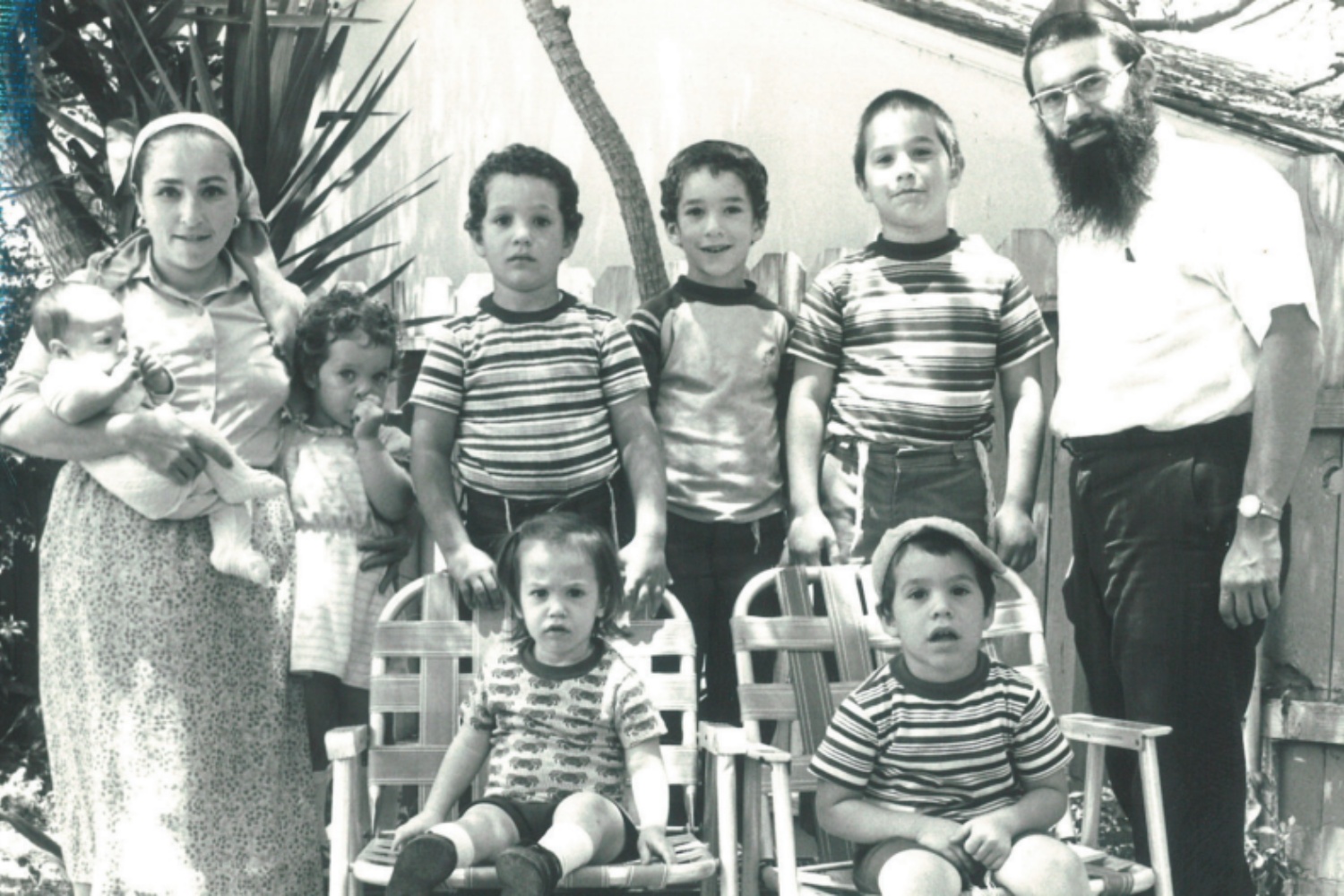 It was a sunny Sunday morning in 1986 and I was driving home when I received a phone call from my wife, Rochel Leah. This was unusual. Usually, at this time of day, she was busy taking care of our family―we had 11 children―so I was immediately concerned.

“I’m coming right away,” I said, driving on the freeway as fast as possible.

When I got home, I could tell Rochel Leah was very sick. We rushed to the nearest hospital and went to the ER. They took one look at her and brought her to the doctor right away.

I waited in the lobby. My mind was racing. I didn’t know what it could be. She was healthy and she was only 36 years old. Together, we served our Jewish community in Long Beach, California. I was the rabbi, and she was my partner through and through. She had given me beautiful children and taught at our Hebrew day school. We had an amazing life together.

I read some Psalms and stared at the floor, unsure what to do with myself.

A short time later, I looked up and the doctor was walking down the hallway. I stood up and approached him. He put his hand on my shoulder and looked me in the eyes.

“I’m sorry,” he said. “We did everything we could for her.” My wife had passed away from a heart condition we had not known about.

At that moment, I couldn’t breathe. I immediately realized that life as I had known it had changed forever. How would I tell our children their mommy was gone? How would I go on? And, as an Orthodox Jewish rabbi, as a man of faith, how could I comprehend this?

I believed that everything God did was good and that, as human beings, we had a limited comprehension of how the world works. We didn’t know the final plan. But that was easier to say than to internalize.

As a rabbi, one of my jobs was to console members of my community who had experienced great loss. Parents whose son had died choking on a hot dog. A wonderful 20-year-old woman with a bright future who had been diagnosed with multiple sclerosis. A mother whose newborn baby passed away from SIDS. I always empathized with them as much as I could, but I didn’t really know what it was like. Until now.

Caring for our 11 children

Those first months after Rochel Leah’s death were the hardest of my life. Suddenly, I didn’t feel in charge anymore—I was reacting to the demands of the moment. While I was still dealing with the needs of a large school, I was now also caring for our 11 children. Meeting their physical needs was challenging but somehow manageable. I had to give up much of my independence and bring in caretakers, which was something so foreign to me.

However, the personal and emotional needs of such a varied group—16-month-old twins through the oldest, a 14-year-old son—was the most overwhelming part of it all. They were trying to cope with their mother’s sudden death, while dealing with their own struggles.

On the surface, they seemed to have adapted quickly to their new reality after shiva, the seven-day mourning period in Judaism, which was followed by eight days at home for the Passover holiday. But their sadness, anger, and anxiety were revealed in other ways. Some acted out in school, some at home, and I was ill-equipped to handle the full scope of responsibilities I was now carrying.

What made this time even more difficult was the fact that I was never alone. I ran a school for 400 students. I was the leader of my community. It seemed like everybody always needed me.

The road to healing

I felt like a person who had had half of himself amputated and was unable to regain his balance. I needed reassurance that what I was feeling was “normal,” whatever that meant.

I sought out a therapist who would understand me. It had to be someone who had lost a spouse and was also raising children alone. I found such a person. I did intensive therapy with her for several months and didn’t hold anything back. It was messy. It was painful. But I was determined to do whatever it took. Maybe one day, I’d feel better.

I realized I couldn’t keep up with all my responsibilities, and I needed to focus on my family during this time. I gave up my job at the school and moved to a larger Jewish community in Los Angeles, where I could be amongst other parents and peers and have more support.

Even though I survived the most challenging time of my life, I couldn’t have done it without my faith. I asked God “Why?” over and over again. I couldn’t understand it. I studied death and the topic of why bad things happen to good people. There are many Jewish texts that deal with this topic.

Jewish teachings essentially say that there are two worlds, and we won’t know fully what the other world is like or what God’s big plan for us is until we get to that next world. There are also teachings that souls come here on a mission and, once they have finished their mission, they are reunited with God. I found comfort in these ideas.

I turned my suffering into positive action. I was much more empathetic to people who had experienced tragedy. I stepped up as a father and gave my all to my children. I taught classes on grief to my community. I prayed to love again, and within a few years of my wife’s passing, I met a wonderful woman who dove into the role of caring wife and devoted stepmother to my children.

Looking back, I now see that the mourning process brought us all closer together. Thankfully, today my children are all married; some of them have children and grandchildren of their own.

There’s still a longing in my soul for what I lost. But every day, I heal just a little bit more. I learned that even though I was in pain, I didn’t have to suffer. Suffering was a choice. I chose not to wallow in depression and death; I chose life instead.

Rabbi Gershon Schusterman is the author of Why God Why? How to Believe in Heaven When it Hurts Like Hell, which is out now. For 18 years, he led the Hebrew Academy in Orange County, California, and he is the proud father of 11 children and many more grandchildren.

All views expressed in this article are the author’s own. Bucks vs. Wizards: How to watch online, live stream...

A top progressive firm signed Rick Caruso as a...

Gatland does not ‘know a lot about’ WRU sexism...

The IMF to Liz Truss and Kwasi Kwarteng: You’re...

What we bought: Peloton’s Lanebreak offered just the kick...

A rival sits out Lebanon’s election. Now Hezbollah could...

Broadcom to buy VMware for $61 billion in big...

McConnell: ‘Ratchet the sanctions all the way up’

‘No bright spot in the world’: The founder of...

Aiven Funding Round Gets $3 Billion Valuation

Sorare teams up with the Premier League for its...

‘We Cannot Afford to Be a Weak Link on...

In their words: Salvadoran women jailed under abortion ban

Daily Crunch: Binance says it will buy FTX after...

Sony’s PlayStation loyalty program debuts in the US on...

Brazil military finds no fraud in election, but refuses...