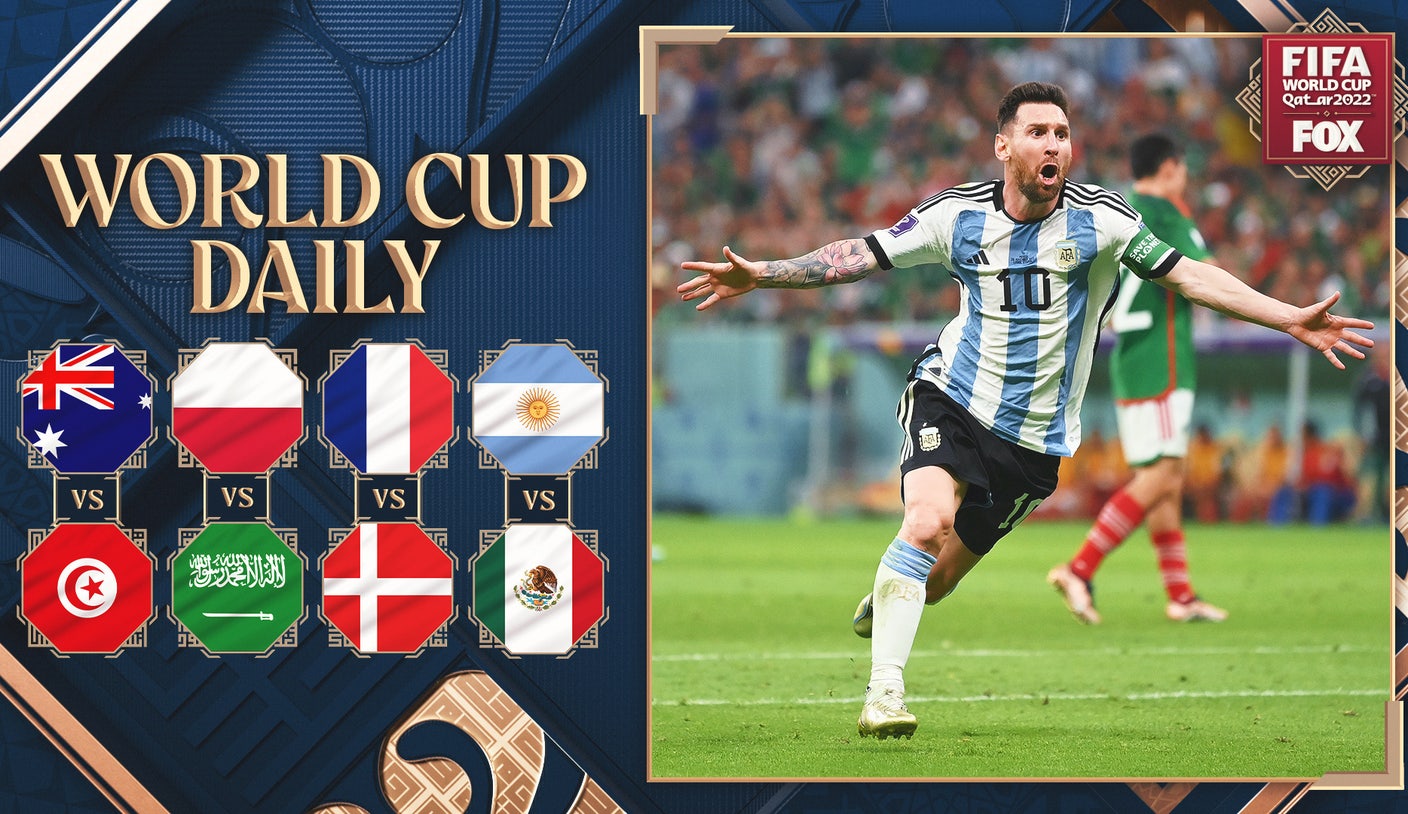 Argentina avoided elimination on Saturday with a 2-0 win over Mexico at Lusail Stadium, while France became the first team to qualify for the knockout stage with its second win of the tournament.

Here’s everything that happened in the World Cup on Saturday and what to watch for on Sunday.

Australia got the result it needed against Tunisia, picking up three critical points, but it will need a win or a draw against Denmark on Wednesday (10 a.m. ET on FS1 and the FOX Sports app) to avoid entering a tiebreaker with Denmark or, less likely, Tunisia.

i scored his first World Cup goal. Even more importantly, it came in a win that put Poland at the top of Group C. Poland can secure its spot in the knockout stage with a win against Argentina on Wednesday (2 p.m. ET on FOX and the FOX Sports app) anything less than that would result in a tiebreaker or, worst-case, elimination.

France clinched its spot in the knockout stage with a 2-1 win over Denmark, which made it the first reigning World Cup champion since 2006 to not get eliminated in the group stage of the tournament. The curse at least for the next four years is broken.

made a bit of history himself. With his two goals against Denmark, he joined Pelé as the only player to score seven goals at the World Cup before the age of 24. He also caught up with Ecuador striker Enner Valencia in the Golden Boot race. It was a good day for Les Bleus.

It wasn’t pretty, but Argentina scrapped out a much-needed win against Mexico. Now, it’s in a position to qualify for the knockout stage with a win against Poland. Given how it started its tournament, things could be a lot worse.

GOAL OF THE DAY

With elimination on the line, Lionel Messi came through for Argentina.

ASSIST OF THE DAY

Robert Lewandowski had to wait until Poland’s second goal to add his name to the scoresheet, but he made its first one possible by hustling to keep the ball in play and finding Piotr Zieliski running toward the goal.

SAVE OF THE DAY

It’s hard to say which one of Wojciech Szczsny’s was more impressive: the penalty save or the follow-up save, in which he had to lunge his body in the opposite direction of where the penalty was placed.

We’re going to go with the second.

Japan upset the German giants in its group stage opener, so a win against Costa Rica which lost to Spain 7-0 on Wednesday should be no problem, right? Well, if that statement holds true, then Japan would be the first team in E to qualify for the knockout round. Japan also qualified for the Round of 16 in 2018.

Belgium not-so-convincingly got three points against Canada on Wednesday. Will it look more like the dark-horse contenders so many thought it would be against Morocco, or will the Moroccans do what Canada couldn’t and earn points?

Croatia and Morocco held each other scoreless with its clashing defensive styles. Don’t expect the same thing on Sunday, as the Canucks are known to spread defenses out. Croatia has to respond with its own scoring opportunities.

One of the most anticipated matchups of the group stage is now more consequential, as the Germans could be facing elimination by the time the ball is kicked off. The best-case for Die Mannschaft is a draw in Japan-Costa Rica.

Check back in after every matchday of the 2022 FIFA World Cup!

Nintendo Switch Sports may get more sports after launch

Pearce-Paul and Pryce to join Knights for 2024

Audio from a Martian dust devil captured for the...

Steam for ChromeOS works on more devices and is...

Grammy nominations to be announced, with 5 new categories

First formula flights from Europe to arrive this weekend

Spain bans harassment or intimidation of women going for...

A Gene That Could Stop Antibiotics Working Found in...

High-powered lasers can be used to steer lightning strikes

Rail strike averted, but still a lot to do

Kylian Mbappe: Paris St-Germain striker says he has not...

Disney Weddings & GMA Celebrate An ‘Outta of This...

‘Baymax!’ Voice Cast: All The Stars Appearing in Disney+...

Democrats slough off attacks on Buttigieg

Kari Lake loses suit over her defeat in Arizona...

Alec and Hilaria Baldwin are expecting their 7th child

What the End Game for Crypto Will Look Like

Cost of living: Keir Starmer set to call for...

US military successful carries out counterterrorism mission in northwest...

As Israel’s Netanyahu nears victory, trouble may lie ahead