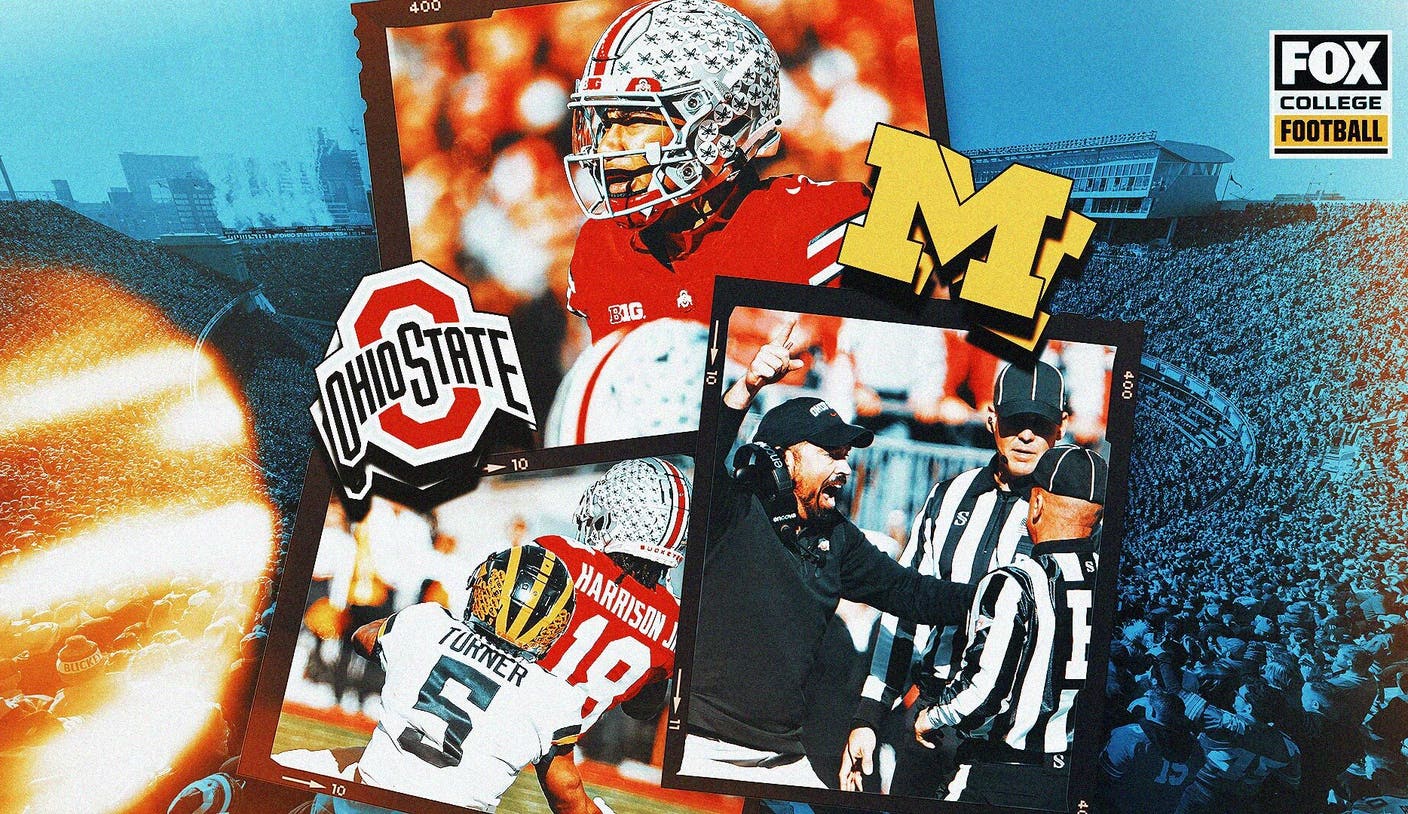 COLUMBUS, Ohio When Michigan hired Jim Harbaugh as head coach at his alma mater, expectations were set firmly at getting the program to the College Football Playoff and evening things out in The Game against Ohio State.

It took slightly longer than many expected, but the former Wolverines quarterback can confidently tick both boxes after delivering a coaching masterpiece under clear skies at the Horseshoe upsetting the Buckeyes 45-23 on Saturday to give the Wolverines their first win streak over their rivals in 22 years.

In the process, the maize and blue locked up the Big Ten East for the second straight season, advanced to Indianapolis for the conference title game and likely made plans for a semifinal berth at the end of December.

The Buckeyes opening script belied the final score, however, and looked as though it had gone through an offseasons worth of revisions to arrive at the perfect set of plays to set the tone early. C.J. Stroud threw his first pass directly into the Wolverines bench, but rebounded with pinpoint accuracy the rest of the way, finding Marvin Harrison Jr. along the sideline for a tight rope catch before that later set up Emeka Egbuka hauling in a touchdown in the back of the end zone to cap the 12 play, 81-yard effort.

Injury concerns were top of mind as Michigan responded with a 10-play opening drive that eventually ended with a 49-yard field goal from Jake Moody. Tailback Blake Corum started the game and recorded two yards on his first carry, but the Heisman contender was clearly not 100% after injuring his left knee against Illinois left week and didnt play the rest of the way. The junior wore a bulky brace on the leg while backup Donovan Edwards sported a hefty wrap on his injured left hand (yet still managed to lead the team in rushing with 216 yards).

Noah Ruggles added a field goal to help extend the lead just as both defenses started to clamp down in the first half. But McCarthy responded just when things seemingly wavered midway through the second quarter, avoiding an all-out blitz to deliver a strike on the outside to Cornelius Johnson, who looped around corner Cameron Brown and avoided another tackle to scamper 69 yards for a game-tying touchdown that delighted the pockets of maize and blue at Ohio Stadium.

Ruggles chipped in a 47-yarder on the next drive, but Johnson and McCarthy were back at it in reply, with the former running wide open without a man in sight for a 75-yard trip to the end zone and Michigans first lead with just over five minutes before half.

Unfortunately for Harbaughs side, it lasted all of 91 seconds, as Stroud started to cook up a response, dinking and dunking his way down the field before finding Harrison Jr. along the right sideline for a 42-yard touchdown pass which got the 106,787 in attendance at the Horseshoe back on their feet.

Michigan ended up bungling its final drive of the first half, but corrected things nicely during the break, beginning the third quarter with a seven-play, 75-yard scoring effort that almost entirely came down to McCarthys legs and arm finding Colston Loveland with a drop-in touchdown from 45 yards out to retake the lead.

The sequence in the middle eight minutes fully encapsulated how the game had flipped into maize momentum. The Buckeyes, which began the game 4-for-4 on third down, didnt convert another until the final quarter while McCarthy, who initially was 3-of-10 for 48 yards on the day, proceeded to hit seven of his next eight passes and notched the three long touchdown throws too.

The signal-caller, who was initially part of a battle under center at the beginning of the year but was handed the job to win games just like this one, later put on the exclamation point with a dive into the end zone to cap off a 15-play, 80-yard touchdown march that silenced the Shoe and took 7:58 off the clock as the scoreboard ticked down in the final frame amid the setting winter sun.

The fallout from the contest may be as intriguing for the losers as it is for the winners. Ohio State doesnt figure to drop too far in the eyes of the Selection Committee but will still need some help if they want to repeat.

Bryan Fischer is a college football writer for FOX Sports. He has been covering college athletics for nearly two decades at outlets such as NBC Sports, CBS Sports, Yahoo! Sports and NFL.com among others. Follow him on Twitter at @BryanDFischer

June commodity outlook – hot to trot, or not?

Amazon’s Blink security cameras and bundles are up to...

William, Harry, Meghan and Kate on walkabout outside Windsor

‘Horizon Burning Shores’ will take Aloy to a volcanic...

Oppressive heat will bake much of the US this...

4 Albanian women, 9 children to be repatriated from...

US Firms Left Hanging as Ban on Some China...

Who lobbies for carried interest backers

Governors declares state of emergency ahead of severe winter...

Madrid Open: Cameron Norrie comes from behind to reach...

‘I went into the bathroom and my water broke...

WHO asks China for more detailed data on COVID...

How I Use Targeted Ads as My Personal Shopping...

Fire breaks out at NJ chemical plant: ‘The worst...

How to identify fake Twitter accounts amid flood of...

US shifted from Democratic preference to Republican in 2021:...

US approves American Airlines flights to more cities in...

Millennial Tech Billionaires Are Having a Pretty Bad Week