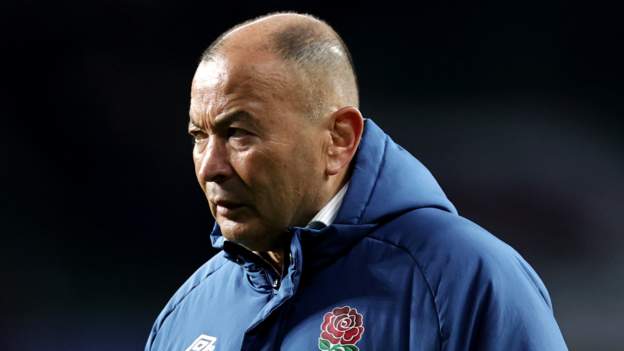 Eddie Jones took charge of England in 2016, leading them to the World Cup final three years later in Japan

Eddie Jones said England’s defeat by South Africa was “entirely my fault” but believes they can have a “really good go” at next year’s World Cup.

Head coach Jones apologised for the performance but said his players were still heading in the right direction, 10 months out from the World Cup.

“We are disappointed we didn’t play how we wanted to,” Jones told Amazon Prime.

“South Africa do things to you that are some times difficult to deal with.

“We didn’t land a shot like we wanted to. You have to win contests and we didn’t win in the air or the set-piece, so it’s hard to get in the game.

“We lost two of the key contests but we will improve in those areas. Results tell you everything and that is what we are judged by but I feel like there is growth in the team, which we have seen, but wasn’t evident today.”

Jones’ side have lost six of 12 Tests in the calendar year, England’s worst run since 2008.

Defeat by the Springboks followed a comeback draw against New Zealand, a victory over Japan and a defeat by Argentina in a disappointing autumn schedule.

Asked if he was still confident in his ability to lead the side into next year’s World Cup in France, Jones said: “I think about where we are going towards a World Cup.

“Obviously we want to win games and be successful but are we moving in the right direction? Yes we are.

“I have coached for a number of years and I believe I can coach well. People will say what they say, and there are ups and downs in sport but we didn’t play well today and I apologise for that, it’s entirely my fault.”

“A number of young players got great experience today and they’ll come back better players for that. We’ve got other players coming back to form, some of our more senior players and we’re not far away.

“We need to develop consistently. Test match rugby is all about consistency.”

‘The plan was clear’

“It was a tough game,” Tuilagi told Amazon Prime. “We wanted to come out and attack, which I thought we did at the start but the Springboks were tough and physical and they put a lot of pressure on us. They forced us to make mistakes and they capitalised on it.

“The plan was clear but South Africa are a quality side and they put us under a lot of pressure. We weren’t good enough today and we have to take it on the chin.

“We are building nicely. Sometimes it’s hard for people to see that but we definitely believe in that.”

“It has not worked out for ourselves today and we were not able to show the best of ourselves but we have put in some good work over the past five weeks and we have to make sure that is not for nothing,” said Farrell.

“We lacked a bit of accuracy and bite at times. The game was really slow to start which they are very good at. We didn’t get our teeth stuck in much like that Argentina game, we must learn to do better.”

South Africa ended the year on a high after narrowly losing in Ireland and France before beating Italy last weekend.

Captain Siya Kolisi, who lifted the World Cup in 2019, said: “It is a big relief for us. We have been working really hard over the past few months.

“I know some results haven’t gone our way but we are still grateful to get the kind of support we are getting from back home.

“England were tough at the beginning but we just stuck to our guns and tweaked a few things.”

US, Ukraine accuse Russia of striking Odesa day after...

Elon Musk has gone from worrying about inflation to...

Jewish man shelters refugees to honor those who saved...

Q&A: Jordan Peele on the dreams and nightmares of...

Cruise ships save dozens of migrants near Florida Keys

Cabinet minister shot to death in his office in...

The fundraising stages are not about dollar values —...

Early snowfall knocks out power to thousands in Great...

The Morning After: The verdict on Samsung’s Galaxy S21...

Review: ‘Black Adam,’ a superhero franchise born on a...

Google Drive is flagging some macOS files for copyright...

Tottenham v Everton in WSL off after heavy rain

The best travel carriers for pets in 2022

‘Forspoken’ is delayed again, this time to January 24th

Zelenskyy says Putin’s nuclear threats “could be a reality”