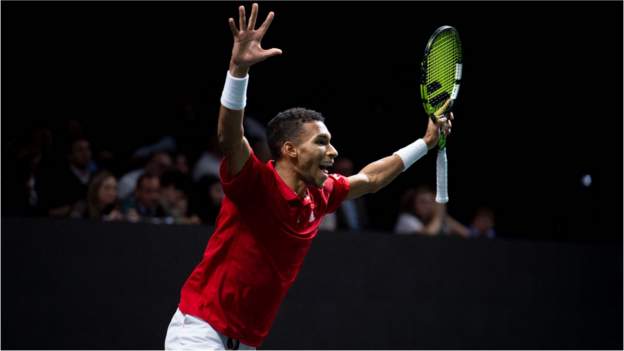 Canada will face Australia in the Davis Cup final on Sunday after beating Italy in the semi-finals.

World number six Felix Auger-Aliassime levelled the tie for Canada with a 6-3 6-4 victory over Lorenzo Musetti.

He and Vasek Pospisil then won the deciding doubles 7-6 (7-2) 7-5 against Matteo Berrettini and Fabio Fognini.

It is the second time Canada have reached the Davis Cup final, having first done so in 2019 when they lost to Rafael Nadal’s Spain.

Australia – the 28-time champions of the tournament – reached their first Davis Cup final since 2003 on Friday with victory over Croatia. Sentence next for ‘driving force’ behind Whitmer kidnap plot

ChatGPT creator Sam Altman on the future of AI:...

Russian vodka pulled from shelves in US, Canada bars,...

Brazil detains hundreds after attacks on Congress and other...

Bumper weekend shows WSL must grow to keep up

The best gifts for travelers in 2022

News aggregator SmartNews lays off 40% of US and...

House Ethics Committee takes no action against Bowman over...

Uttarakhand: At least 25 killed as bus plunges into...

How to find the best travel insurance plans

California COVID outbreak could ease up next month

Crypto startup Ledger teams up with Cathay Innovation to...

Oil Poised for Fifth Weekly Gain Ahead of Summer...

Germany may make displaying ‘Z’ in support of Ukraine...

US coastlines to experience ‘profound’ sea level rise by...

Thousands of runners rally around U.S. to finish run...

FTX founder could be sent to US after extradition...

MLB fans had lots jokes about a Yankees fan...

Getting concert tickets has never been easy. But the...

Zak Rudden: Can Scotland U21 striker be the difference...

Musk’s Twitter: ‘This is exactly what many of us...

CBD has too many safety unknowns to be regulated,...

Ghost Security emerges from stealth to defend APIs and...

The Morning After: Why Nikon and Canon are giving...

Frances Tiafoe out of US Davis Cup team after...