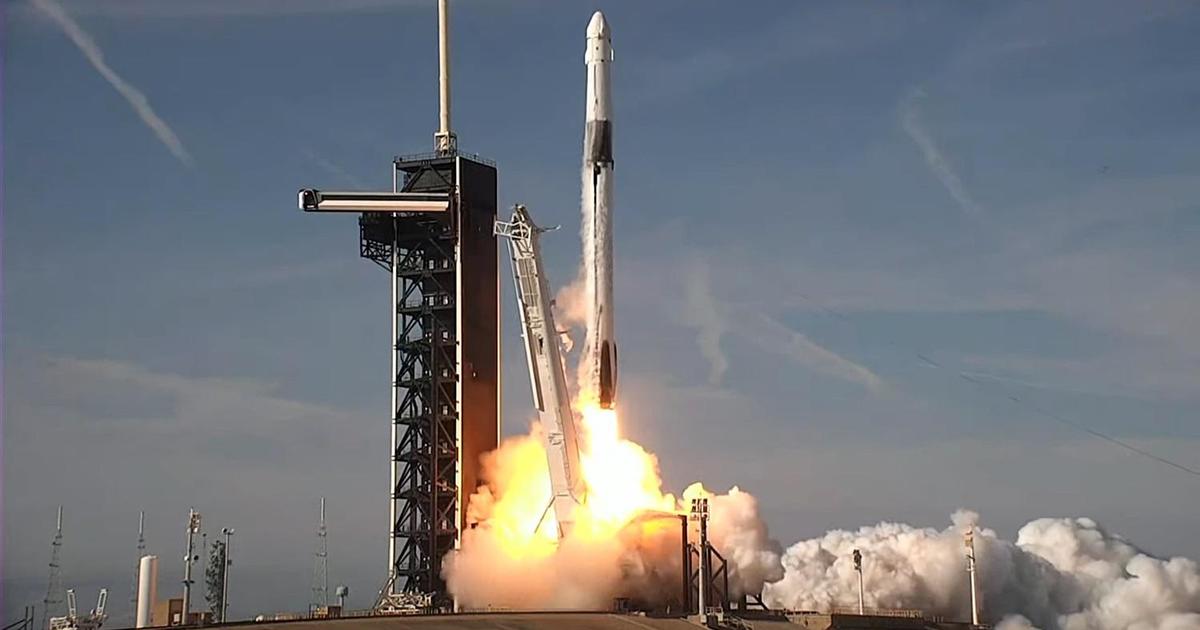 A SpaceX Falcon 9 rocket carrying a Dragon space station supply ship blasts off from the Kennedy Space Center Saturday, kicking off a 17-hour rendezvous. If all goes well, the Dragon, loaded with 7,700-pounds of supplies and equipment, will dock at the lab complex at 7:30 a.m. EST Sunday.

Running late because of stormy weather earlier this week, the Falcon 9 rocket’s first-stage engines roared to life at 2:20 p.m. EST and the slender rocket shot away from pad 39A at the Kennedy Space Center. About 12 minutes later, the Cargo Dragon was released to fly on its own.

If all goes well, the spacecraft will chase down the station early Sunday, approaching from behind and below. After looping up in front of the lab and then above it, the capsule will move in for an autonomous docking at the space-facing port of the forward Harmony module.

“Of critical importance to us (are) the two new solar arrays that we’ll be doing spacewalks … to install and deploy on board the International Space Station,” said Joel Montalbano, space station program manager at the Johnson Space Center in Houston.

“And in addition to the two solar arrays, we have some life support equipment being delivered, some GPS hardware, some exercise hardware and some medical equipment. … All in all, we’re looking for an exciting mission.”

Also on board: belated Thanksgiving treats for the station’s seven-member crew, including spicy green beans, cranapple desserts and pumpkin pie.

“In addition, our standard food menu allows them to have everything that we’d be having on Thanksgiving, you know, mashed potatoes, candied yams, mac and cheese for those who want mac and cheese. So we’re going to get those guys fed very well.”

The Cargo Dragon also is loaded with research gear, including an experiment to grow dwarf tomatoes in space, an experimental in-flight medical diagnosis kit, an experiment to test novel techniques for building large structures in microgravity and another that will test new ways to produce key nutrients in space.

A camera on the Falcon 9’s second stage captures a view of the Dragon cargo ship floating away after reaching orbit. A set of rolled-up solar array blankets is visible in the spacecraft’s unpressurized trunk section.

The ISS Roll-Out Solar Arrays, or IROSAs, are the third and fourth of six being installed on the space station in a $103 million upgrade to augment the power output of the lab’s eight older, original-equipment blankets.

The space station was built with four huge rotating solar wings, two on the right side of the lab and two on the left. Each of those four wings is made up of two solar blankets extending from opposite sides of a central hub.

The first pair of original-equipment blankets have been in operation for more than 20 years. Subsequent wings were added in 2006, 2007 and 2009. All of them have suffered degradation from years in the space environment and they do not generate as much power as they did when they were new.

The IROSA blankets, about half the size of the original arrays, are more efficient and will eventually generate an additional 120 kilowatts of power. They were designed to be mounted on brackets at the base of an existing wing, extending outward at a 10-degree angle to minimize the shade they cast on the array below.

NASA is in the process of upgrading the International Space Station’s solar power system. The first two of six roll-out solar array blankets were installed last year, attached to the outboard original-equipment arrays on the far right. Two roll-out arrays launched aboard the Cargo Dragon Saturday will be attached to inboard arrays on the right- and left-side of the station.

Once all six roll-out arrays are installed, overall power generation will be boosted 20 to 30 percent, roughly matching the output of the original arrays when they were new.

The final two of the six IROSAs currently under contract will be launched next year. It’s not yet known whether NASA will buy two final IROSAs to augment all eight of the station’s original blankets.

William HarwoodBill Harwood has been covering the U.S. space program full-time since 1984, first as Cape Canaveral bureau chief for United Press International and now as a consultant for CBS News. He covered 129 space shuttle missions, every interplanetary flight since Voyager 2’s flyby of Neptune and scores of commercial and military launches. Based at the Kennedy Space Center in Florida, Harwood is a devoted amateur astronomer and co-author of “Comm Check: The Final Flight of Shuttle Columbia.” REAL OR FAKE: Texans ‘cheer’ on their favorite Christmas...

Google Pixel 7 up close: the software’s the thing

Bleacher Report names one player Ravens should offer in...

A Pixel Fold clue has been spotted in Google’s...

Solana’s speedy approach to crypto is attracting developers, despite...

2022 NFL draft: One player comparison for every Bills...

More than 60 percent of CEOs globally say they...

Asian markets mixed ahead of Fed report, US jobs...

The Air Force wants to send its Reaper drones...

Windows 10 is winning in another surprising way

The real way to support Ukraine is to flip...

Thai capital on alert for flooding as heavy rains...

Stay Organized on Outdoor Adventures With This Rugged Bin

She-Hulk episode 2 may have secretly set up Marvel’s...

‘Thanks for hating, it helps the movement’: How a...

A fair maps success story or ‘multi-layered stages of...

Among the mangroves, Biden cultivates diplomacy

Max Verstappen says Formula 1 does ‘not need to...

Dutch police leaders vow to tackle racism in their...

Spring Statement: Is this really the biggest personal tax...

Walmart post-Black Friday sale: Save over $300 on the Lenovo Legion 5i...
Congress to see record breaking number of women in office come January