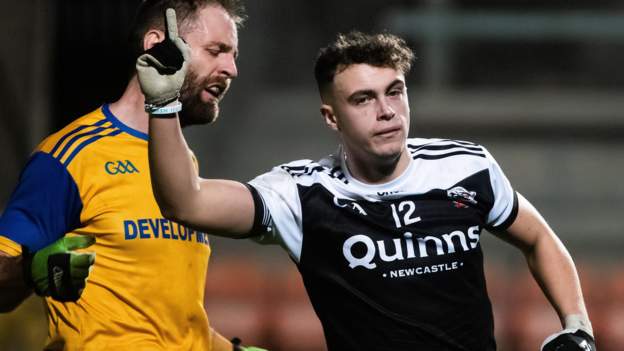 Kilcoo are through to the Ulster Club Football Final for the third year running after overcoming a brave Enniskillen Gaels comeback to win 3-14 to 1-9 in Saturday’s semi-final.

Shealan Johnston hit 2-1 to help the reigning Ulster and All-Ireland champions lead 2-8 to 0-1 at the break.

Enniskillen improved in the second half and reduced the deficit to seven points thanks to substitute Eoin Beacom’s 1-2.

However, Aaron Morgan’s goal dashed the Gaels’ hopes of a major upset.

Kilcoo will face the winner of Sunday’s semi-final between Derry champions Glen and Antrim kingpins Cargin in the provincial decider on 11 December.

And while Enniskillen enjoyed a fruitful spell early in the second half, Kilcoo showed more than enough to suggest it will take a huge effort from either Glen or Cargin to prise the Seamus McFerran Cup away from the Down village.

Enniskillen, back in Ulster for the first time since 2006, reached the last four courtesy of a penalty shootout victory over Naomh Conaill, but like Fermanagh rivals Derrygonnelly last in last year’s provincial final, they were ultimately no match for Kilcoo’s tenacious defending and clinical finishing.

Kilcoo are now one win away from becoming the first club to win a hat-trick of Ulster titles since Crossmaglen in 2012.

Playing with a strong wind in the first half, Kilcoo notched early scores through Jerome and Shealan Johnston before the latter netted his first goal in the fifth minute, firing past Cian Newman after Miceal’s Rooney superb tackle and driving run.

With the impressive Rooney and Ryan McEvoy among those in black and white ensuring the Enniskillen forwards were feeding off scraps, Kilcoo’s speed on the break produced a feast of scoring chances at the other end.

Conor Laverty curled over a beauty before Darryl Branagan kicked two superb scores – carbon copies of each other – to stretch Kilcoo’s lead to 1-6 to 0-1 after John Reihill had fisted over Enniskillen’s only score of the first half.

Enniskillen only had themselves to blame for Johnston’s second goal, however, as goalkeeper Cian Newman passed straight to Laverty. The Down manager fed Ceilum Doherty, who teed up Johnston to hammer the ball high into the net with Newman stranded.

Gaels boss Simon Bradley responded by introducing Eoin Beacom at the break and the full-forward made a considerable impact, kicking two scores either side of Richard O’Callaghan and Conor Watson points.

And when Beacom’s well-taken goal was followed by O’Callaghan’s second score from play, there was a sense that Kilcoo were beginning to crumble.

The holders responded in a manner befitting of their status as All-Ireland champions, however, with Morgan palming to the net after a fine move involving Shealan Johnston, Laverty and Doherty.

Kilcoo’s third green flag extended their lead to 10 points with eight minutes remaining, a position from which Enniskillen could not recover.

While they needed penalties to beat Clonduff and extra-time to overcome Warrenpoint on their way to a 10th Down title in 11 years, Kilcoo appear to be peaking at the right time as they close in on another provincial triumph.

US Existing-Home Sales Fall a Sixth Month to Over...

Anker chargers and accessories are up to 44 percent...

The military firm arming Russia will be dubbed a...

Amenitiz gets $30M for SaaS it bills as ‘Shopify...

Iwobi out for three weeks with ankle injury

Why some of Biden’s top doctors are wearing masks...

These smart home products can make a big difference...

Which MLB phenoms are next in line for long-term...

Ranking the NFL’s 5 most and least hopeful fanbases

Tech Addiction or Habit? 5 Ways to Assess Your...

Jason Kokrak disqualified from Travelers Championship after failing to...

Grab one of the last remaining tickets to TC...

Spirits Of Hatred Across The Land

UN experts warn of impact of abortion bans on...

A Saudi billionaire who calls himself the Arabian ‘Oracle...

Samsung is putting NFTs in its smart TVs

John Lewis to be honored on US postage stamp...

No Allies Who Buy Babies

Hungary Downplays Impact of Reports EU is Set to...