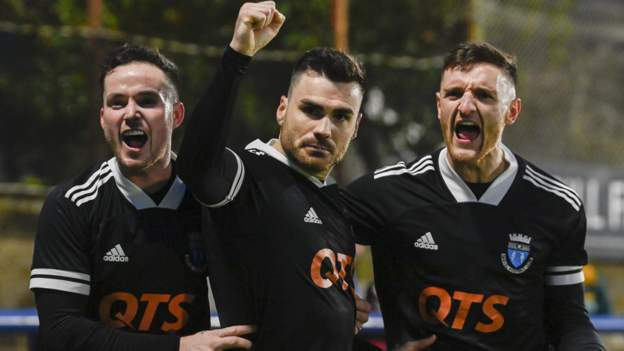 Meanwhile, Stirling University, who are second in the Lowland League, beat League 2 side Albion Rovers 1-0 after extra time in Coatbridge.

Promotion rivals Edinburgh were not so lucky as former Stirling Albion midfielder Alex Docherty’s driven finish just after the break was enough to secure victory for West of Scotland First Division side Drumchapel.

Darvel, who lead the West of Scotland Premier Division, were never behind after Cameron Eadie gave them an early leading away to Montrose.

Although the hosts replied soon after through Terry Masson, a double from former Queen of the South midfielder Ian McShane and another from Ross Caldwell put the visitors in control. Scott Brown gave Montrose some late hope, but Andy Stirling had time to restore the advantage.

Championship side Dundee also needed an extra 30 minutes to dispose of Airdrieonians.

However, the League 1 visitors paid for having former Dundee United defender Cammy Ballantyne sent off as the 90 minutes finished 2-2 as substitute striker Derick Osei Yaw scored the first two of four extra-time goals.

Stirling Albion striker Dale Carrick’s double was not enough to give the fourth-tier visitors a shock result against Inverness Caledonian Thistle as the Championship side equalised twice before winger Aaron Doran fired the winner.

Veteran striker Bobby Linn hit both Arbroath goals in their win away to Highland League side Fraserburgh.

Defender Aaron Muirhead also grabbed a double as Greenock Morton eased aside Queen of the South.

Gary Oliver was another with a double, the striker helping Falkirk thump hosts Wick Academy 6-0.

Partick Thistle midfielder Ross Docherty and Kelty Hearts winger Joe Cardle were both sent off in the Championship hosts’ 3-0 win.

Greenock Morton 4-1 Queen of the South

A semi-truck full of migrants was found abandoned in...

The British pound has taken a tumble. What’s the...

US revises up last quarter’s economic growth to 2.9%...

SkorLife gives control of credit data back to Indonesian...

“This Goes To The Heart Of Who These People...

Testing the power and luxury of the Lucid Air...

Getting your Samsung phone repaired? This new update makes...

The East Coast could see dangerous rip currents this...

The Rise and Fall of Political Islam

TIAA CEO says her dad couldn’t save enough for...

Android Auto not working on your Samsung Galaxy S22?...

After Depp, Heard verdict, Me Too founder says movement...

Covariant, MassRobotics and The Engine discuss the road from...

Renesas halts work at Beijing plant due to COVID...

Which Biden donors scored invites to the state dinner

Powell Says US Economy Is in Strong Shape, Fed...

Can long Covid lead to death? A new analysis...

FDA pushes to make COVID-19 vaccinations easier. At the...

UK to declare bank holiday May 8 to honor...

Artist Jon Foreman, whose canvas is a beach