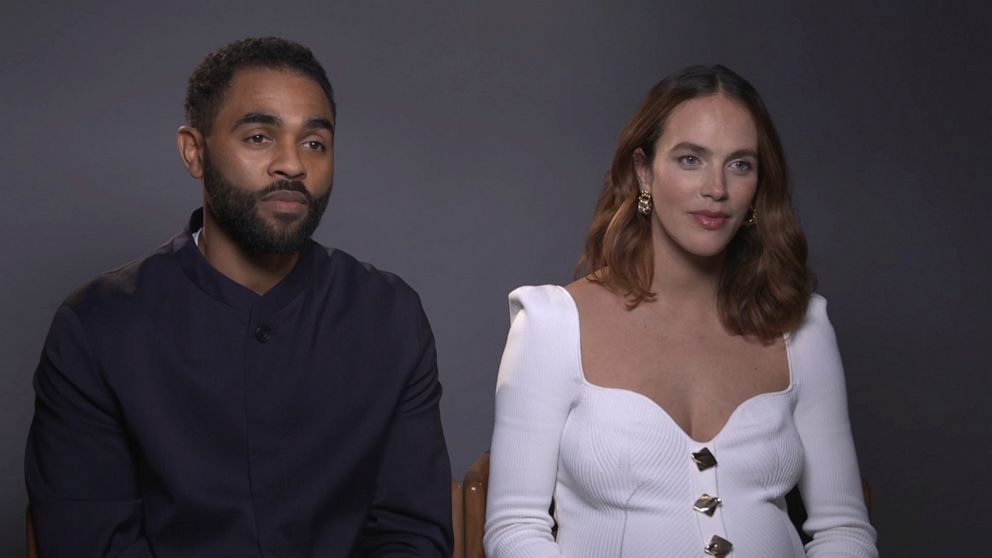 LONDON — The Flatshare stars Jessica Brown Findlay and Anthony Welsh got to do all their own stunts in their new rom-com TV series.

The stunts in question? Writing Post-it notes, which sometimes required multiple takes: I got so many sent back being like, Its great, but thats not how you spell that word, Brown Findlay laughed.

Based on the bestselling book by Beth OLeary that was translated into more than 25 languages, The Flatshare revolves around two strangers who live in the same apartment one at night and the other in the day. They communicate through the sticky notes. It begins airing on Paramount Plus on Dec. 1.

We did all our own handwriting, Brown Findlay explained.

Welsh added that they had to write out about five of each note note.

Jessie knows this now, but I was in like secret competition with her because every day the props department would be like, Youve got like a batch to do today. And Im like, How many we got?” he described. “We got 40. OK, 40 damn. How many has Jessie done? Shes done all of them.

The television series follows the relationship that develops between Leon and Tiffany, played by Welsh (“Fleabag,” The Great) and Brown Findlay (“Downton Abbey,” Brave New World).

Most of the show is set in the London apartment that the characters share, which had panels that could be removed to enable filming in the small space.

As soon as Tiffany moves in, she takes over the space, Welsh said.

It felt like Tiffs flat from day one. And I was like, OK Peter (Cattaneo, director), tell me whats mine and whats hers, and like, 85% of this stuff is Tiffanys,” he said. “Leon lives a very, like, simple, minimalist life almost, but she brings a lot of color into the set.

Brown Findlay said she’s had loads of flatmates and like, mad flats.

I rented a flat once because there was Harry Potter wallpaper in the loo. I just failed to see any other, like, everything else about the flat was terrible and I just ignored all of it, she said.

She admitted worrying she was like the weird flatmate who wouldnt come out of their room a lot in her past flatsharing arrangements.

Sometimes youre just like, I just need some space or like taking really long baths and stuff, and then theyre like, Youve used all the hot water, she said. “Yeah, I dont know if I was always great.

But for their own flatsharing arrangement, the lead actors who hadnt met before were delighted to work together.

We kind of both fangirled each other, Brown Findlay said.

Shenzhen is loosening its COVID restrictions in the latest...

R&B hitmaker R. Kelly due in court for sex...

Do Pete Carroll, Seahawks have beef with Russell Wilson?

Horse Guards Parade: Man with knife wanted to be...

Which USFL mascot would win a Royal Rumble?

Another scandal has engulfed Buckingham Palace. Does the British...

Biden to travel to Ohio to promote infrastructure law

The Hill’s Morning Report – Who will replace Justice...

The ‘King’ and the Queen: Bewitched by Pele, Elizabeth...

The Ashes: Travis Head strangled down the leg side...

Why Did Sebastian Köhn Get Monkeypox?

Biden says US and India in ‘close consultation’ in...

Pay growth fails to keep pace with cost of...

Fernandes ‘not happy at all’ about World Cup

Who is Twitter Chairman Bret Taylor? Elon Musk’s Opposite

Finally, Google Stadia is getting a feature that’s actually...

Metals Traders Brace for the Next Big Squeeze as...

Dame Vivienne Westwood in pictures: From punk to catwalk...

New injection for newborns to protect against RSV approved...

Here’s Biden’s plan to aid Ukrainian refugees and why...

Mexico says it will host US, Canadian leaders in January
NFL odds Week 12: How to bet Broncos-Panthers