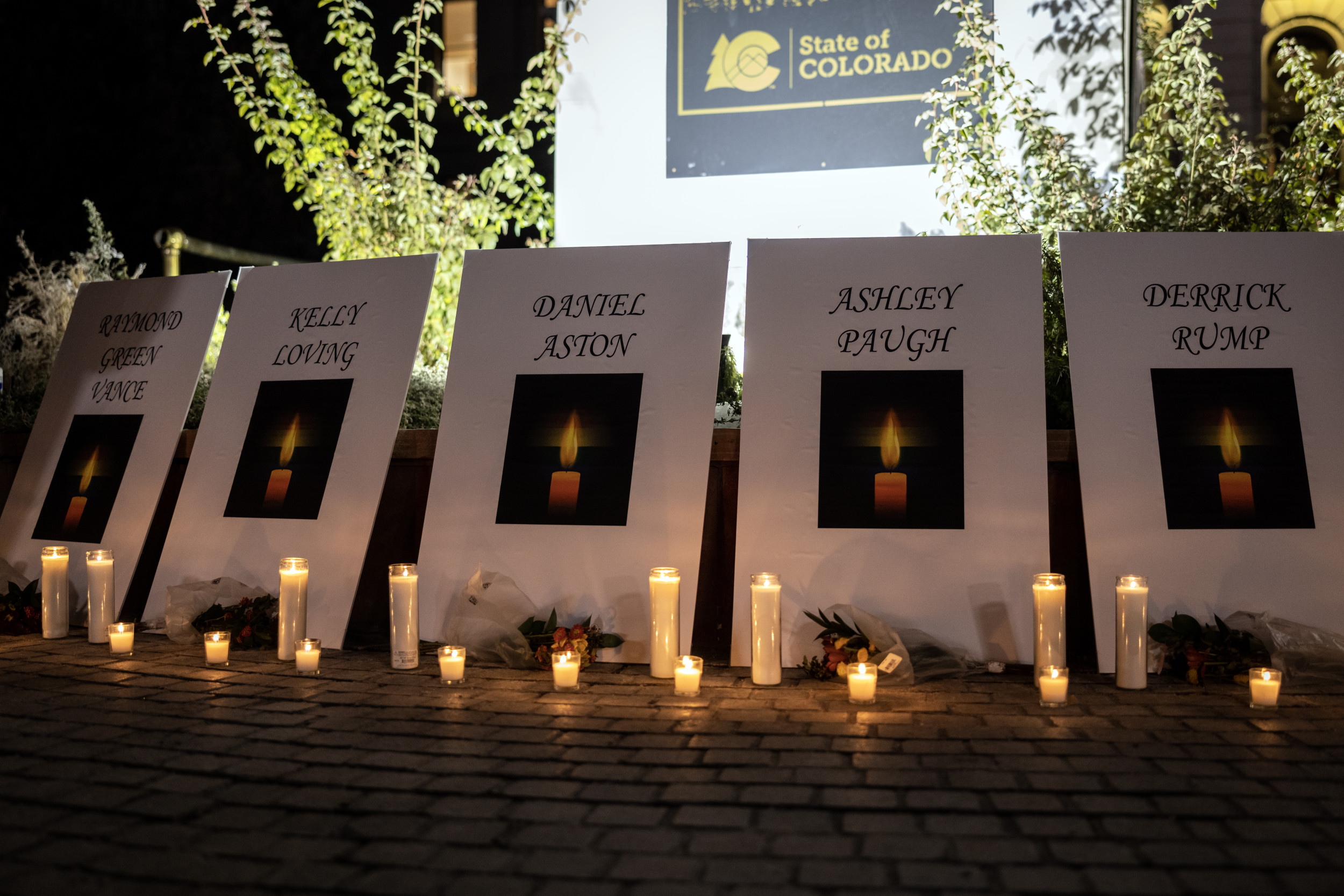 Focus on the Family’s Colorado Springs, Colorado, headquarters was vandalized on Thanksgiving with a message blaming the group for a recent mass shooting that killed five people and injured 18 others.

Anderson Lee Aldrich, 22, is accused of opening fire Saturday in Club Q, a popular LGBTQ nightclub in Colorado Springs. The suspect was apprehended by club patrons Richard Fierro and Thomas James as well as an unnamed trans woman, and later arrested by police.

Days after the mass shooting, someone left a spray-painted message on a Focus on the Family sign. The nonprofit organization has an evangelical focus.

Although it is not clear if the suspect had a connection with the organization, the conservative Christian ministry group is known for its anti-LGBTQ messaging. Aldrich, who according to his attorneys identifies as non-binary, comes from a conservative Republican family.

The names of the Club Q shooting victims are displayed as mourners hold a candlelight vigil outside the State Capitol building on November 23, 2022, in Denver, Colorado. Focus on the Family, an evangelical organization in Colorado Springs, was recently vandalized in response to the mass shooting at the LGBTQ nightclub. Chet Strange/Getty Images

In an article by The Gazette, police confirmed a message was spray-painted in black paint onto a Focus on the Family sign at the ministry’s headquarters in Colorado Springs.

“Their blood is on your hands five lives taken,” the message read.

Police said there was no information about who might have vandalized the sign, according to The Gazette. Shortly after the message was discovered, a Gazette photographer found the sign covered in a plastic sheet.

Human Rights Campaign alleges that Focus on the Family uses the $515 million it has raised over the last five years to invest in public education campaigns against LGBTQ equality. It also accuses the evangelical group of conducting “conversion therapy” and claiming anti-bullying campaigns in schools promote homosexuality.

In a Focus on the Family question-and-answer webpage, in response to the topic “struggling with same-sex attractions,” the ministry said the word “gay” is an “artificial construct.”

“[Gay is] a word that means what other people say it means—nothing more, nothing less,” the webpage said. “We’d encourage you not to allow yourself to get locked into that category.

“Do you consider yourself a Christian? If so, you will want to examine your faith convictions with great care and give them priority over every other consideration,” the group continued on the page.

When the spray-painted message was shared on Twitter, several users supported the vandalism.

“I mean, there’s a hell of a lot more than 5 deaths caused by focus on the family,” one user tweeted.

“Not bad enough,” another tweeted about the vandalism. “Needs fire.”

“Today, they should be thankful we don’t repay blood with blood,” another tweeted.

Newsweek has reached out to the Colorado Springs Police Department and Focus on the Family for comment. Foundations call for cooperation, some new pledges at COP27

Teen had been staying with father before mother’s slaying

Spooky spots to explore from the US to Asia

Low Levels of Vitamin B9 Linked to Higher Risk...

Captured: Suspect who shot Arizona police officer has been...

Russian cosmonauts spark speculation after arriving at ISS in...

Peloton to Shed About 800 Jobs

Getting abortion pills by mail is already more complicated...

Yayoi Kusama’s yellow pumpkin sculpture is back on Naoshima...

In Mexico, an entire town has its cross to...

By the numbers: Ohio State vs. Notre Dame, Oregon...

Uber and Waymo are working together on long-haul autonomous...

Cana Technology raises glass to new capital as it...

Review: ‘Top Gun’ sequel a welcome trip to the...

Evacuation attempts of people from Mariupol to continue on...

How a nice-guy South Dakota senator fell into a...

US States Slash Taxes Most in Decades on Big...

America Movil teams up with Mexican national guard to...

Train, Tube and bus strikes: What you need to...

At GSK, women now hold both the CFO and...

From celebration to mass shooting chaos at Chicago suburb’s...

Tory leadership: Why would anyone want to be prime...

Welcome to Wrexham: City in spotlight with Ryan Reynolds’...

The latest on the Alabama fugitive case

Cowboys keep winning despite issues. How good can they...