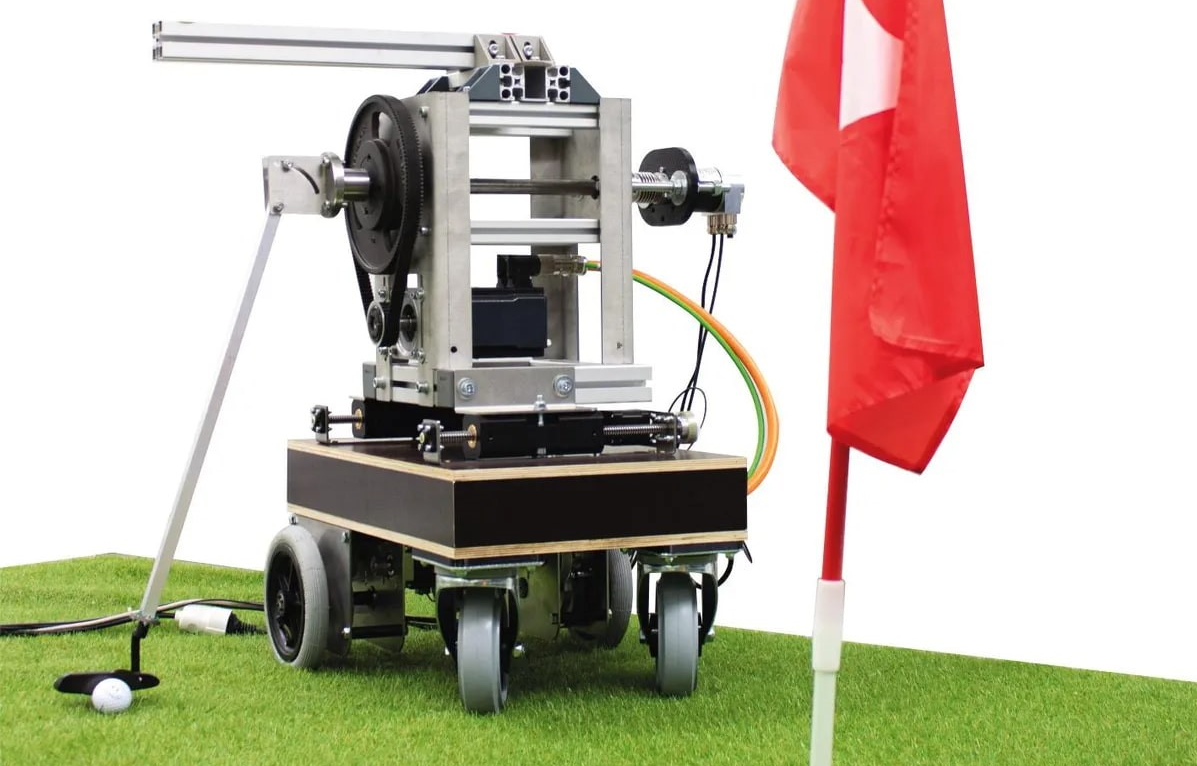 that can whack a golf ball down a fairway aren’t exactly new, but building one that can play the nuanced short game is a more complex problem. Researchers at Paderborn University in Germany have done just that with Golfi, a machine that uses a neural network to figure out how to line up a putt and how hard to hit the ball to get it into the hole from anywhere on the green.

and it simulates thousands of random shots taken from different positions. It takes factors like the turf’s rolling resistance, the ball’s weight and the starting velocity into account. Paderborn doctoral student Annika Junker told IEEE Research

that training Golfi on simulated golf

shots takes five minutes, compared with 30-40 hours were the team to feed data from real-life shots into the system.

Once Golfi has figured out the shot it should take, it rolls over to the ball and uses a belt-driven gear shaft with a putter attached to make the putt. The robot doesn’t get the ball in the hole every time, though. Junker said the robot nailed the shot around 60-70 percent of the time. That’s still a better accuracy rate than most amateur golfers and at least you won’t see Golfi fly off the handle like Happy Gilmore

However, Golfi sometimes drove over the ball and moved it out of position. The researchers have only tested the robot in the lab, so real-world conditions, like greens with divots or steep slopes, may pose problems for a system that relies on a bird’s-eye view.

In any case, the researchers didn’t set out to build a robot capable of competing with PGA Tour

pros. They hope that the techniques they used in Golfi could be used for other robotics applications. You can also transfer that to other problems, where you have some knowledge about the system and could model parts of it to obtain some data, but you cant model everything, Niklas Fittkau, another Paderborn University doctoral student and co-lead author of a paper on Golfi

Back in 2016, a different robot called LDRIC sank a hole-in-one at a PGA event

(albeit on the fifth attempt). I wonder who footed the bill for a round of drinks at the clubhouse afterward. China locks down ‘iPhone City’ for 7 days on...

What does Awaab Ishak’s death tell us about England’s...

Netflix thought now would be a good time to...

Renault sells its stake in Russia’s Avtovaz, option to...

‘We feel guilty for leaving Ukraine for Scotland’

Checking In On ETFs

Russia ready to discuss prisoner swap with US, Lavrov...

Incense for the Emperor

Man convicted in woman’s 2006 murder even though body...

Italians vote in election that could take far-right to...

Concern is growing over coercion in USDA chicken rule

Thanksgiving weather: Snow, rain expected in parts of US

Most Euro-Zone Consumers Didn’t Actually Save More in Pandemic

New Zealand to end quarantine stays and reopen its...

‘Gotham Knights’ is scheduled to arrive on October 25th

When autumn leaves start to fall, will Wall Street...

Why are water bills rising more in some areas?

Orban says Hungary will stick to veto of EU-Ukraine...

Johnny Depp’s Lawyer Gets a Promotion After Defamation Case...

Cineworld (LON:CINE) Says It Considers Filing for Bankruptcy in...

YouTube makes it easier for creators to issue corrections

Can FTX's bankruptcy bring order to its chaos?
Black Friday has lots of good deals. These are the ones you...