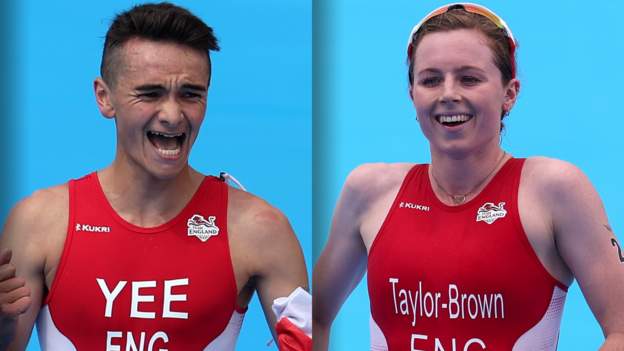 Britons Georgia Taylor-Brown and Alex Yee will bid for titles as the World Triathlon Championship Series comes to an end in Abu Dhabi.

Taylor-Brown, 28, tops the women’s standings going into Friday’s decider, while Yee, 24, is second behind Hayden Wilde before Saturday’s men’s finale.

Both races will be streamed on BBC iPlayer and the BBC Sport website.

“I’m really excited,” said Taylor-Brown on Instagram. “I’m quite relaxed. I’ll give absolutely everything on the day.”

Taylor-Brown, who won the title in the Covid-affected 2020 season, is vying with Bermuda’s three-time champion Flora Duffy, 35.

Yee, meanwhile, is battling with 25-year-old Wilde, who leads the standings. Yee must finish at least two places ahead of the New Zealander to become champion.

He said he would try not to get “caught up in the emotion” of what could be a thrilling conclusion.

“I think when you race free and enjoy yourself that’s when you get the best out of yourself,” Yee told BBC Sport.

“I’m just going to race the way I race, not change anything and not try to get caught up in the emotion of anything and just enjoy myself.” What you need to know about the Year of...

Burkina Faso’s military leader agrees to step down after...

A water crisis in Jackson, Mississippi, has left residents...

Eye Opener: Tropical storm warnings issued throughout much of...

Amy’s Kitchen says its food is made with ‘love.’...

Kenya to spend $37 million on sending forces to...

Biden left with few options on Iran as nuclear...

Paris attacks trial: Verdicts due for 20 accused of...

Trial next for 4 accused in Michigan governor kidnap...

‘So many bodies piled up’: Hong Kong funeral services...

Mental health: ‘Being in a mother and baby unit...

Here’s why A.I. chatbots might have more empathy than...

Opinion: The real-life Clark Kent never got his Lois...

UK to introduce bill next week to breach Brexit...

Treasury blocks Russia from paying debt out of U.S....

Mark Zuckerberg’s Millions Won’t Be Part of This Round...

NASA Curiosity Finds Organic Carbon on Mars That May...