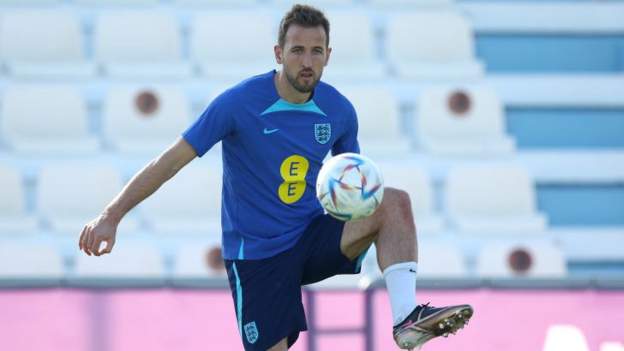 ‘Kane is sore but fine’ – Pickford on England captain’s fitness

The striker injured his ankle early in the second half of Monday’s opening 6-2 victory over Iran in Group B and was later substituted.

“Harry is fine. He has worked slightly separately from the group but all good for Friday night,” said Southgate.

“He had a scan [on Wednesday] to make sure everything is fine.”

Tottenham’s Kane has scored 51 goals in 76 appearances for the Three Lions, two behind Wayne Rooney’s record of 53.

Meanwhile, Manchester United defender Harry Maguire is feeling “much better” after also being substituted on Monday.

“He was feeling ill and that was affecting his vision,” Southgate told BBC Sport. “You worry about concussion in that instant, but we were going back through all the footage and there is nothing, so he is in a good area.”

Defender Kyle Walker has stepped up his training and is available to play on Friday for what would be his first match since groin surgery in October.

Forward Callum Wilson did not train in a light session with the rest of the substitutes at England’s Al Wakrah training base on Wednesday, but is not considered a fitness doubt.

Midfielder James Maddison, who missed the Iran match because of a knee issue, also did not train.

England will qualify for the last 16 if they beat the United States and Southgate added: “We would like to get qualification done as soon as possible.

“The first objective is to get out of the group.

“We would love to do that on Friday, but the game won’t be anything like Monday.

“We have to make sure we are back to the psychological place we were at the start because the States will be an athletic team, press really well, be organised, well coached.

“They have quite a few players we know from the Premier League and they showed in the first half against Wales the best side of themselves.

“Monday was a great start and it is that reset to be ready for Friday.”

Get the latest results and goal notifications for any team at the Fifa World Cup by downloading the BBC Sport app: Appleexternal-link Stop spending so much time on your product when...

Chinese workers are running away from the giant factory...

Bitcoin is down about 50% from its all-time high...

Adventurous childhood play may buffer against anxiety and depression:...

Another whirlwind day for politics…in 60 seconds

Toyota CEO Says His Successor Must Have ‘Unshakable Conviction’

France’s EDF May Halt Power Exports to Italy for...

Trudeau’s Finance Chief Has More Room to Spend in...

Review: ‘Olga Dies Dreaming’ is a unique and beautiful...

3 charged over murders of British journalist and Indigenous...

UAW boosts strike pay for workers amid spate of...

NHS Patients Are Finding It ‘Too Difficult’ to Book...

Decision to ban Russian, Belarusian athletes is not a...

WHO: Decline in new COVID-19 cases could be tied...

Shoppers not returning to Scotland’s stores

US midterms: Time for Republicans to decide ‘who they...

The same day he wielded a huge layoff ax,...

Sea to Summit’s Arlo TR1 Is a Fantastic Ultralight...

Sony has a partner to build its PlayStation-toting EVs,...

The McRib is on a ‘farewell tour,’ but McDonald’s...

At Elton John’s White House concert, tears and a...