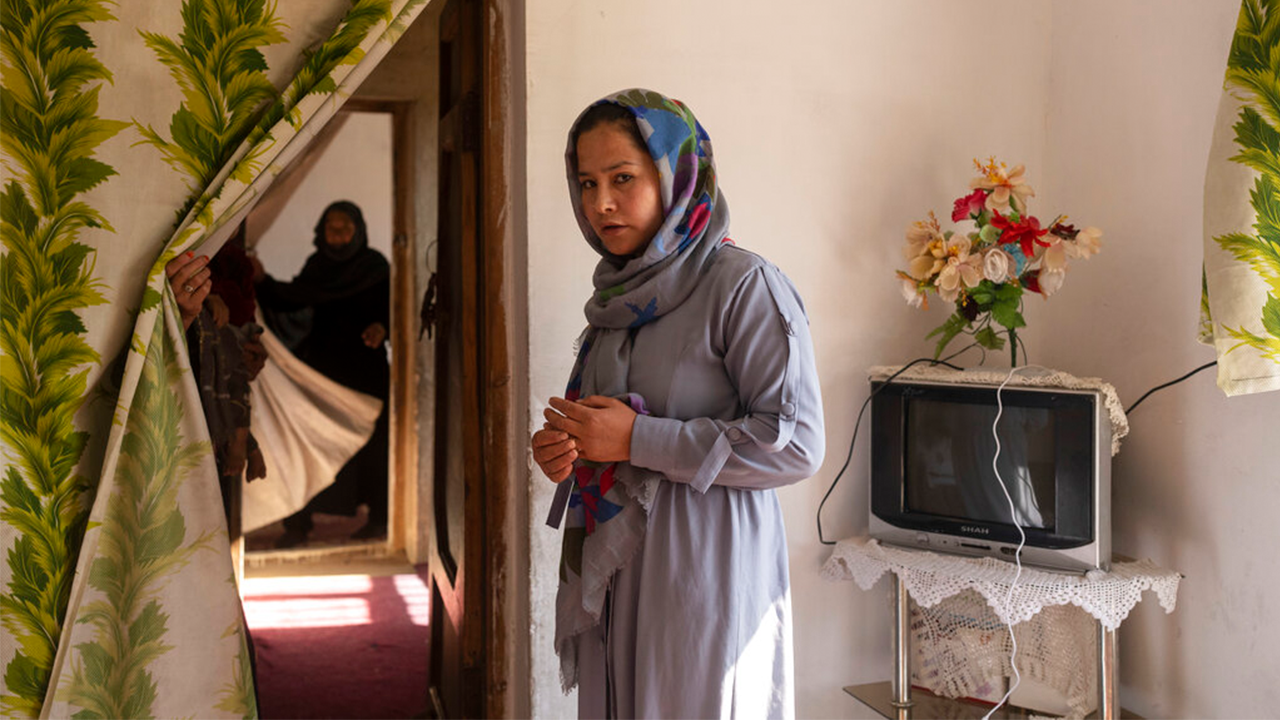 Taliban officials told media outlets that the edicts are not hard-and-fast rules per se, but merely guidelines to be kept in mind during transmissions.

The “guidelines” were laid out on Sunday by Afghanistans Ministry for the Prevention of Virtue and Prevention of Vice. The edicts targeting women were among nine in total aimed at reigning in what the militant Islamic group deems immoral.

Other guidelines ban films or TV shows that are against Islam or Afghan values such as depicting the Prophet Muhammad. Another guideline deems depiction of male bodies, such as an unclothed torso, inappropriate, Reuters reported.

The new rules on women in the media fly in the face of the Talibans reassurance to the world after it seized back control of the country that it would be more moderate and respect “womens rights.”

Evacuees wait to board a Boeing C-17 Globemaster III during an evacuation at Hamid Karzai International Airport, Kabul, Afghanistan, Aug. 23.

“The Talibans new media regulations and threats against journalists reflect broader efforts to silence all criticism of Taliban rule,” said Patricia Grossman, associated Asia director at Human Rights Watch, in a statement. “The disappearance of any space for dissent and worsening restrictions for women in the media and arts is devastating.”

U.S. troops left Afghanistan on Aug. 30, a day ahead of the deadline that the Biden administration agreed to with the Taliban, officially drawing the countrys longest-ever conflict to an end. The Labour leader says his party offers a different route to recovery as we come out of the pandemic.
Read more

An investigation into deaths at the hospital in Gosport is reviewing millions of pages of evidence.
Read more

"The Talk" host Sharon Osbourne on Wednesday claimed that she was "set up" by her co-hosts when they asked her questions about her support for Piers Morgan.The argument between Osbourne and her colleagues ...
Read more

COVID cases around the world level off but concerns...

Stuck Ship in Suez Canal Holds Up Oil and...

The Ever Given, a container ship longer than the Eiffel Tower that ran aground in the southern part of the canal in Egypt, is still stuck across the waterway and that means no oil or LNG is getting through. Anthony Dipaola reports. (Source: Bloomberg)
Read more

A year after it was first to premiere at the Cannes Film Festival, Wes Anderson’s “The French Dispatch” finally rolled into the French Riviera festival on Monday
Read more

The State Department says everyone was on board with the evacuation timeline. But the Pentagon says it pushed to move faster.
Read more

Russia's central bank on Thursday proposed banning cryptocurrency in the country over concerns about financial instability.The bank released a report saying that cryptocurrency should be blocked as a means of trans...
Read more

Lawyers and family say Trevor Reed is refusing food to protest solitary confinement, "and other serious violations of his rights in the penal colony."
Read more

Binta Williams, 22, is one of many new fans loving the diversity of the Euro 2020 England squad.
Read more

Nearly 50 years after a 15-year-old girl was stabbed to death in suburban Chicago, genetic genealogy has led to an arrest in the case.
Read more

Paleontology hobbyists Derek Demeter and Henry Sadler made the extraordinary find, along with several others, on April 25.
Read more

American plans to invest in a budget airline based...

New York City mayoral candidate Eric Adams (D), who has maintained a sizable lead as more results come in from this week's Democratic primary, declared Thursday that he is "the face of the new Democratic Party," ...
Read more

"He's going to do it again," said Shay Walker. "It's not like he touched someone one time. He's a serial rapist." Walker said she was abused by Andrews when she was between the ages of 7 and 12.
Read more

Marvel’s What If? show finally gets a release date...

The long-awaited What If? Marvel animated series finally has a release date on Disney Plus.
Read more

Federal Reserve officials see economic growth and inflation both rising higher in 2021 than they expected earlier this year, according to economic projections released Wednesday.Members of the Fe...
Read more

Taiwan condemned the closure of Hong Kong's most vocal pro-democracy newspaper the Apple Daily on Thursday as "political oppression" of the Chinese-run city's media, saying it sounded the death knell for freedom of speech and the media.
Read more

McCarthy pleads with Republicans to stop infighting: ‘Congress is...

House Minority Leader Kevin McCarthy (R-Calif.) on Wednesday pleaded with Republicans to stop attacking each other as they keep getting mired in nasty personal fights, admonishing them that "Congress is not jun...
Read more

The new leader of the World Trade Organization is trying to find a compromise on vaccine patents to help global efforts to combat coronavirus.
Read more

The Australotitan grew up to 30m (96ft) long and is among the largest dinosaurs found worldwide.
Read more

WhatsApp is making its message deletion feature even more...

Soon you could have longer to decide about your sent messages.
Read more

Brazilian state-run oil company Petrobras (PETR4.SA) said on Tuesday it has decided to raise gasoline and diesel prices at its refineries starting on Wednesday, adding the move comes in …
Read more

Senator Elizabeth Warren, pressing Federal Reserve Chair Jerome Powell on his record on financial regulation, said she wouldn’t support him for a second term as head of the U.S. central bank.
Read more

Former President Donald Trump is growing frustrated with the lack of movement around a new super PAC intended to further solidify his influence over the GOP, according to two people familiar with the conversations....
Read more

Mighty White of You

Kevin Williamson's new book is high on arrogance and short on empathy. The post Mighty White of You appeared first on The American Conservative.
Read more

A woman who smelled something funny about her husband before his Parkinson's diagnosis is prompting new research into how to detect the disease. Sky News' Mike McCarthy reports.
Read more

US politician Nancy Pelosi heads to Chorley, Lancashire for...

The Lancashire town is hosting a meeting of presiding officers - including the US Speaker of the House.
Read more

Trials of Russia’s adenovirus-based vaccine in the United Arab Emirates have shown an efficacy of 91.6%, the Abu Dhabi government said.
Read more

The find comes after emergency crews were called to Pugneys Country Park in Wakefield on Sunday.
Read more

Former New Zealand all-rounder Chris Cairns says he is "grateful to be here" despite being left paralysed from a spinal stroke during surgery.
Read more

The renewed spotlight on the issue could create a headache for President Joe Biden, who is set to travel to Europe later this month for the Group of Seven summit of world leaders.
Read more

France red list: Queues in St Pancras ahead of...

Travellers in St Pancras station, London, queue to try and get to France before the imposition of restrictions.
Read more

Paul Ellis, who had both his legs amputated in 2008, says the support of passers-by kept him going.
Read more

“I have no intention to bring it to the floor,” Pelosi said of the legislative push.
Read more

A closer look at some of the most poignant, funny or noteworthy social media posts for Father's Day 2021.
Read more

Niall Ferguson: Nixon, the Gold Standard and a Bitcoin...

House Speaker Nancy Pelosi extended the period in the House that allows for members to vote via proxy to July 3, the speaker announced in a letter Monday.
Read more

The mayor of Berkeley, Missouri, is appealing for calm following a violent protest that began after a white police officer shot and killed a black teenager who police say was armed with a gun. Vladimir Duthiers reports.
Read more

Vincent Evans, an aide to Vice President Kamala Harris, will take over as the executive director of the Congressional Black Caucus, sources familiar with the move tell The Hill.Evans, who served as deputy director...
Read more

Judge asked to OK evidence of Ahmaud Arbery’s past...

Maddie Durdant-Hollamby's parents says they will never learn why she was murdered by her partner.
Read more

Blinken: Convictions in Myanmar ‘further affronts to democracy and...

Secretary of State Antony Blinken condemned the "unjust" conviction of Aung San Suu Kyi on Monday, calling for her and other democratically elected Burmese officials to be released.Suu Kyi was sentenced to four years in prison on Monday, after...
Read more

Nine taken to hospital after two pile-ups on A74(M)

The first A74 (M) crash involved eight vehicles and the second, on the same road, involved four vehicles.
Read more

#DisneyCreators: Bring a Touch of Disney Fall Magic to...

Perhaps there is no better sign that fall has arrived than the magical placement of Mickey-themed wreaths aligning Main Street, U.S.A. at Magic Kingdom Park. Even though these iconic fall decorations have recently seen a magical 50th anniversary celebration m…
Read more

These Xbox game deals are offering big savings this...

Pinduoduo Inc. is now China’s largest e-commerce company with its user base surpassing Alibaba Group Holding Ltd.’s in December. On the same day it announced the feat, its billionaire founder and chairman Colin Huang said he is relinquishing control. Bloomber…
Read more

Wally the wandering walrus is spotted in Iceland

The 800kg mammal had not been seen for more than three weeks.
Read more

Flight attendants train in self-defense amid spike in unruly...

Flight attendants are training to hit, elbow and gouge simulated aggressive passengers. With actual passengers getting more violent than ever, the TSA has re-launched a voluntary program suspended by the pandemic that trains flight crews in self-defense skill…
Read more

A shipment of explosives erupted in a massive blast outside of Beijing, China, sending dozens to the hospital. CBSN's Vladimir Duthiers has footage of the incident.
Read more

Hyperdrive Daily: Will Ferrell Was on to Something About...

The House passed legislation on Monday that would expand access for veterans, their spouses and caregivers to receive vaccines for both the flu and COVID-19 through the Department of Veterans Affairs.The bill, passed by voice vote, would build upon...
Read more

Vaccines available to all over 60 at New York...

New York Gov. Andrew Cuomo (D) on Wednesday announced that all residents in the state over the age of 60 can walk into mass coronavirus vaccination sites to get a shot without making an appointment. ...
Read more

Actress Kate Hudson stars in a new short film directed by Zack Snyder, best known for his "Justice League" movies, that will serve as a debut of the redesigned 2022 Infiniti QX60. It will be released on June 23.
Read more

These must-have electronics are on sale now.
Read more

Universities to get good job targets for poor students