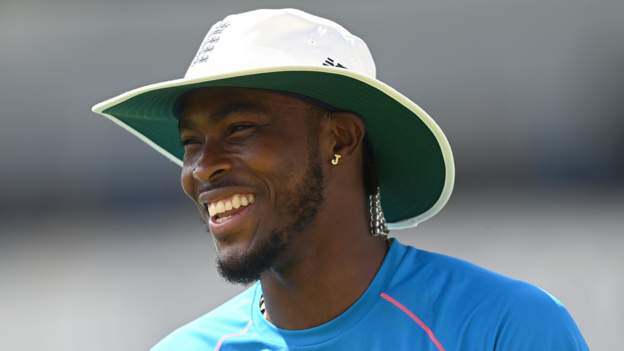 Pace bowler Jofra Archer made his first appearance for 16 months as he lined up for England Lions against England in a tour match in Abu Dhabi.

Archer has not played for England since March 2021 because of elbow surgery and then a stress fracture of the back.

He took 0-38 from nine overs on day one of the three-day game.

and had not played any competitive cricket since July 2021.

They start a three-Test series in Pakistan on 1 December.

Pope, standing in as captain for the game in Ben Stokes’ absence, helped England score at more than six an over.

Will Jacks, who could make his Test debut against Pakistan, smashed 84 from 48 balls from number eight.

Liam Livingstone – part of England’s T20 World Cup-winning side this month – hit 36 from 23 balls in his first red-ball match since September 2020, while Ben Foakes finished 48 not out.

Dan Lawrence took 2-57 for the Lions, but Leicestershire leg-spinner Rehan Ahmed conceded 73 from eight overs, while Matthew Fisher, who made his Test debut this summer, went for 77 from 11.

Archer, whose workload is being monitored by the England management, is bowling a limited number of overs in the game. Stephen Port: Met to be re-investigated over serial killer

Biden says he’s “doing well and getting a lot...

Daily Crunch: Citrix to be acquired by Vista and...

Do our pets care about us?

Biden to announce new support for US biotech production

Biden says he hopes his legacy ‘is that I...

England to offer Covid jab to five to 11-year-olds

Oklahoma executes Benjamin Cole who was convicted of killing...

Zinc heads towards new $41M tech-for-good fund to back...

Book excerpt: “Putting the Rabbit In the Hat” by...

Nourish Ingredients gets $28.6M boost for its animal-free fats

Countdown Capital raises $15 million to back the next...

YouTube is reportedly planning to launch a ‘channel store’...

Elon Musk is no saint, but much of the...

Heads of state: A walk among giant presidential busts

Senior defense official: No sign yet of Belarusian forces...

Elden Ring runs fine on 8GB of RAM and...