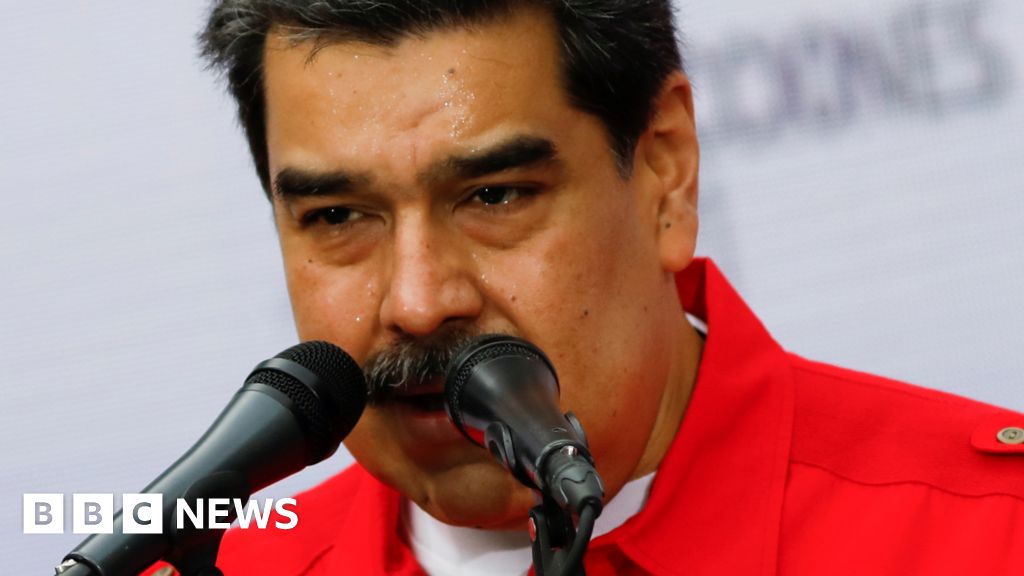 Venezuela’s ruling party has won 20 out of 23 state governorships in Sunday’s regional elections, the first in four years in which the main opposition parties took part.

In a move which reflected the predictable outcome, the Cuban president congratulated his Venezuelan counterpart before the electoral authorities had announced the results.

That is one of the lowest rates in the past 20 years.

The election was the first in nearly four years which was not boycotted by Venezuela’s main opposition parties.

In previous elections, these parties had told their voters to refrain from casting their ballots arguing that it was not a fair contest.

The election which saw Nicolás Maduro re-elected as president in 2018 was marred by vote-rigging claims and more than 50 countries refused to recognise him as Venezuela’s legitimate leader.

But with Mr Maduro still in the presidential palace and the European Union sending electoral observers, the main opposition parties decided to change strategy and take part in Sunday’s polls.

However, many opposition voters questioned this move, arguing that the Socialist party – which has been in power for the past 22 years – has developed such a tight grip over the electoral authorities and other institutions that free elections are not possible.

Image caption, The European Union sent an observation mission to the election

Preliminary results suggest the opposition did not manage to dispel the distrust many Venezuelans had in the voting process.

The opposition only won in the states of Zulia, Nueva Esparta and Cojedes, while government-allied candidates swept to power in the remaining 20, according to preliminary results.

And while a government victory was widely anticipated in most states, many Venezuelans commented on a tweet by Cuban President Miguel Díaz-Canel, who congratulated his ally, Mr Maduro, on the “convincing victory” even before Venezuela’s electoral authorities had announced the first results.

Three out of four Venezuelans are living in extreme poverty, according to a national survey.

Government-critical media reported that some voters had been intimidated by members of violent pro-government gangs, but the National Electoral Council said that there had only been “small and isolated problems”.

The European Union electoral observer mission is due to present its report on the election on Tuesday.

Oklahoma Gov. Kevin Stitt is in a stand-off with local school officials in the rural Cherokee Nation, with the school board insisting they can require that students wear masks in their Covid-ravaged community and the GOP governor claiming the board is in viol…
Read more

The pair went on Instagram live to discuss the backlash to their song.
Read more

Watford manager Xisco Munoz praises the atmosphere at Vicarage Road for the club's first match back in their Premier League.
Read more

Exercise is well-known to benefit a person's physical and mental well-being, and research also suggests exercise may lower the risk of developing breast cancer.
Read more

The former school recovery tsar warns of growing educational inequality as a result of the pandemic.
Read more

Iran dodged formal diplomatic censure at the United Nations nuclear watchdog as envoys opted to try coaxing Tehran back to the negotiating table rather than mount pressure over an investigation into decades-old traces of atomic material.
Read more

The Black Friday Sonos deals have been disappointing - but this excellent Samsung soundbar deal is here to save the day.
Read more

People in a ward with one of the lowest election turnouts in England give their views on voting.
Read more

Covid-19: Hancock to face MPs after Cummings attack and...

Hi, it’s Mark Bergen. Erin Elizabeth was kicked off Facebook. Elizabeth, owner of an alternative health blog, is one of the “disinformation dozen” named in a recent high-profile report on social media’s anti-vaccination problem. Soon after that report, she wa…
Read more

A federal judge grilled attorneys involved in a lawsuit that sought to overturn Michigan's election results during a hearing Monday over whether the lawyers should be sanctioned for their conduct in the case....
Read more

‘The Abolition of Man’ and the Fourth of July

Michael Ward’s guide to C.S. Lewis’s modern classic reminds us that a good life is lived towards a good death.  The post ‘The Abolition of Man’ and the Fourth of July appeared first on The American Conservative.
Read more

A slight majority of Republican voters say that state-level reviews of the 2020 presidential election will uncover information that will reverse the outcome of the race, ...
Read more

Over 40 free Xbox game demos are available to...

PC sales are set for their most successful year...

Brian Laundrie's sister Cassie Laundrie told ABC’s "Good Morning America" Tuesday that she doesn’t know if her parents are involved in his disappearance, but added, "I think if they are, they should come clean."
Read more

President Biden on Friday met with Stacey Abrams and Georgia lawmakers while in Atlanta to discuss voting rights in the face of legislation introduced by state GOP lawmakers in various states that would restrict access to...
Read more

South Carolina Police Chief Luther Reynolds told "Justice with Jeanine" that he is "very angry" with the rise in crime in the United States, and says the government needs to “do more” to stop it.
Read more

Realme GT successor could be a foldable phone

Rumor is the Realme GT 2 Fold will come out next year as the first foldable phone from Realme.
Read more

Boost your happiness with that extra hour of daylight

Get a free $50 gift card when you pre-order the Samsung Galaxy Watch 4 at Best Buy.
Read more

Winners and losers from England’s autumn

Whose stock is up and whose is down after Test victories over Tonga, Australia and South Africa?
Read more

We’ve scoured the internet for the best deals to keep you entertained during quarantine part two.
Read more

A pill to treat critical Covid patients and MPs' anger at Boris Johnson feature on the front pages.
Read more

Jupiter’s Legacy on Netflix is a different superhero offering than what we’re used to - and that’s a good thing.
Read more

Portrait of Spot the Robot Descending a Staircase

A new exhibit by classical portrait painter Agnieska Pilat seeks to bring out the "essence" of her most recent sitters: Boston Dynamics' Spot and Atlas.
Read more

Your Weekend Reading: A Cop’s Conviction and America’s Racial...

What you need to know about Israel’s new Prime...

After four elections in two years, and with the country trapped in an agonizing parliamentary stalemate, Naftali Bennett appeared to be on the outside looking in, unable to reach the levers of power in Israeli politics. And yet Bennett is now Israel's Prime M…
Read more

Banco Santander SA could eventually bring staff back to the office most of the time, according to Ana Botin, executive chair of the Spanish bank.
Read more

The dusty, rocky Martian surface and a Chinese rover and lander bearing small national flags were seen in photos released Friday that the rover took on the red planet.
Read more

Trump Plans to Resume His Trademark Rallies in June

The often-raucous events were a staple of Trump’s campaigns in 2016 and 2020 and during his presidency.
Read more

An Energy Crisis Is the Latest Threat to Food...

An energy crisis is exposing the vulnerability of food supply chains.
Read more

Laura Ingraham: This has been a blockbuster week, we’ve...

Laura Ingraham summarized the “facts” established this week that "show that our government…is apparently more concerned about helping the CCP than it is about protecting our national interest.
Read more

Scientists expect the variant, first found in India, to be the dominant strain in NI by the end of June.
Read more

Japanese Prime Minister Yoshihide Suga has asked the U.S. drug maker Pfizer Inc. for additional supplies of the COVID-19 vaccine to speed up the inoculation drive that lags behind many other countries
Read more

Citigroup orders all U.S. employees to get COVID-19 vaccine

Mandate is the first by a major Wall Street bank and impacts bank's U.S. workforce of 65,000 employees.
Read more

When Joe Biden would talk on the 2020 campaign trail about the need to rekindle bipartisanship in Washington and his unique ability derived from decades in the Senate to make it happen, there were lots of eye rolls.
Read more

Advocates Struggle to Control Police Use of Surveillance Tech

A key backer of a 2018 Oakland law to rein in tools like automated license plate readers says the city is not following the rules.
Read more

"We are in a second golden age of space exploration and development," Mike Gold, executive vice president of Redwire Space, said.
Read more

Hawaii will from July 8 drop a requirement for pre-travel coronavirus testing and quarantine upon arrival for domestic travelers who have been fully vaccinated in the United States, Governor David Ige said on Thursday.
Read more

COVID-19 incidence was 37% lower in elementary schools that required staff to wear masks and 39% lower in schools that improved ventilation.
Read more

Lawyers acting on behalf of the U.S. government have challenged a British judge’s decision to block the extradition of WikiLeaks founder Julian Assange to face espionage charges in the United States
Read more

South Carolina Governor Henry McMaster has signed into law a bill that aims to restart executions after an involuntary 10-year pause.
Read more

The Icelandic group "Of Monsters and Men,” joins this week's Saturday Sessions. They first broke through in their home nation after winning a music competition. Then came the world when they recorded an album that spawned two international hits. The group pe…
Read more

This week the company announced it would shut down Fleets with an extremely apt tweet.
Read more

Cuomo hit with new accusation — A new side...

Presented by AARP NY Gov. Andrew Cuomo says he was not aware of a sixth allegation of inappropriate behavior leveled at him, but...
Read more

John Walker's Captain America looks like he's about to have his ass handed to him by Bucky and Sam.
Read more

The departure of Kay Cole James is an opportunity for the Heritage Foundation to correct course. The post Whither Heritage? appeared first on The American Conservative.
Read more

Arsenal head coach Mikel Arteta says his side's 5-0 defeat to Manchester City in the Premier League is a "tough one to take".
Read more

Students whose parents didn't go to college often work instead of joining extracurricular activities, and can lag peers on skills like résumé writing.
Read more

Covid in Scotland: Glasgow to remain in level three...

The city will continue to be the only part of Scotland still under the country's level three restrictions.
Read more