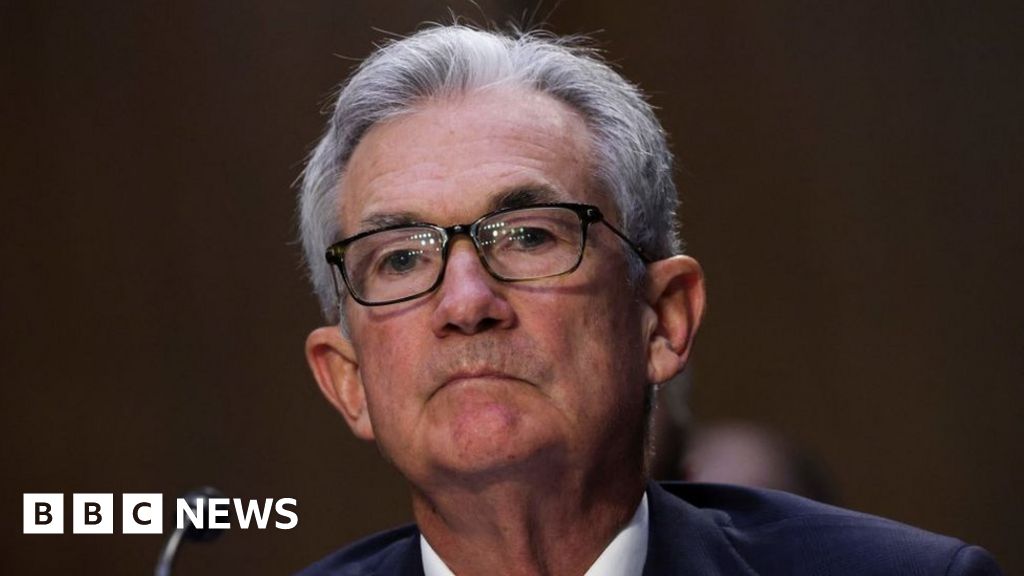 Jerome Powell has been nominated for a second term as chair of the US Federal Reserve by President Joe Biden.

Mr Powell is set to stay in the role, which includes managing inflation and regulating the financial system, for a further four years.

He was initially appointed by former President Donald Trump andstarted his first term in 2018.

The 68-year-old Republicanhas been praised for his management of the economy during the pandemic.

The other front-running candidate, Lael Brainard, was favoured by progressives on the left of President Biden’s Democratic Party.

They have criticised Mr Powell for not doing enough to tackle climate change and say he has weakened regulation of financial institutions. Capitol fencing to be removed within days: report

Remaining fencing around the Capitol Building that has been up since the Jan. 6 riot is set to be removed as early as this next week, ...
Read more

Samsung Galaxy Z Flip 3 Lite could be among...

A report suggests Samsung could launch three foldable phones at an event on August 11.
Read more

Beau Biden dies at 46, grief outpours from both...

Beau Biden was the first child of a sitting President or Vice President to die since JFK's son Patrick passed away two days after birth in 1963. There has been an outpouring of grief for the Vice President's eldest son from Democrats, Republicans, and journal…
Read more

The U.K. and the European Union are set to effectively extend the grace period during which certain food products can cross the border from Great Britain to Northern Ireland without checks, people familiar with the matter said.
Read more

Wycombe Wanderers could launch legal action against relegation after...

Wycombe Wanderers owner Rob Couhig is considering taking legal action against their relegation to League One after Derby announced they are due to go into administration.
Read more

Border Patrol agents in the Rio Grande Valley (RGV) Sector are seeing a significant increase in large groups of migrants hitting the border, with more groups in Fiscal Year (FY) 2021 already matching the number encountered in the past two years combined.
Read more

Manchin says he could back reconciliation bill this year

Sen. Joe Manchin (D-W.Va.) said Wednesday that he could support passing a Democratic-only spending bill by the end of the year, even as he blasted a multi-trillion-dollar top-line spending bill envisioned by progressives...
Read more

The National Weather Service (NWS) confirmed that tornadoes touched down near the cities of Flint and Detroit, leaving thousands in Michigan without power, T...
Read more

Confessions of a Cybersecurity Professional Who Got Stuck in...

Set reminders throughout the day to be mindful, impactful and present in whatever task you're doing.
Read more

Moderates win the day in close vote over Southern...

Yes, you really can run Windows 11 on Raspberry...

Homeland Security chief to travel to US Southern border...

Homeland Security Secretary Alejandro Mayorkas said Sunday he will travel to the US southern border as the Biden administration grapples with the thousands of migrants who have amassed in Del Rio, Texas, and ramps up deportation flights to Haiti.
Read more

The new method of removing leaves from tracks will be trialled across northern England in the coming weeks.
Read more

Can we be friends? Dating apps say sex isn’t...

Can we be friends? Dating apps say sex isn't everything in a post-pandemic world  Reuters
Read more

Thomas Muller scores his first competitive goal for Germany since 2017 as they come from behind to beat Romania in World Cup qualifying.
Read more

Astro can patrol the home when you're not there, or be remotely controlled.
Read more

Every Disney parks fan has a wish list and a checklist – things they dream about and things they must do when they visit a Disney theme park. We’re inviting you to create a new list: Your 2021 Disneyland Resort Summer Bucket List!
Read more

Coronavirus: Unions call for vaccine patents to be waived

A global coalition of unions says failing to do so would make supply chain crises worse.
Read more

Tupac Shakur’s life, legacy to be subject of massive...

A group of Democrats on the House Ways and Means Committee on Wednesday aimed at encouraging businesses to hire Americans that have been hard hit by the coronavirus pandemic.The legislation would expand the work op...
Read more

Pentagon announces group to investigate reports of UFOs near...

In the wake of last summer’s UFO report, the Pentagon has announced the formation of a new group that will investigate reports of UFOs close to sensitive military areas.
Read more

A truck made its way around Charlotte, North Carolina for several hours on Sunday with an ad on its side declaring "Don't get vaccinated." Underneath the message was the name of a funeral home. B...
Read more

Paul Ryan says there are “laws on the books”...

Speaker of the House Paul Ryan spoke about gun laws and mental illness the day after the deadly shooting at Marjory Stoneman Douglas High School in Florida.
Read more

The California recall election is a backdoor power grab

A lot has been thrown at Gavin Newsom -- including unprecedented wildfires and a once-in-a-century pandemic, writes Van Jones. And, through it all, Newsom has brought heart, smarts, resilience and determination.
Read more

Ryan Roberts tried to endanger the life of a police officer during the Bristol disorder, jurors say.
Read more

Deliveroo Jumps After Court Rules its Drivers are Self-Employed

Deliveroo Plc got a much needed boost after a U.K. appeals court ruled its riders are self-employed, bolstering the viability of its labor model after rival Uber Technologies Inc. lost a similar case earlier this year.
Read more

German Health Minister Jens Spahn said special regulations relating to the coronavirus pandemic could end on November 25, though many indoor test, vaccine and other hygiene measures would need to remain in place, Bild reported.
Read more

To Prevent Civil War in Myanmar, Asian Nations Must...

They have the most influence over the junta — and the most to lose from having a failed state in their midst.
Read more

All congressional Democrats say they have been vaccinated: CNN

All congressional Democrats say they have been vaccinated for COVID-19, according to a survey and collection of public responses ...
Read more

Unconfirmed reports suggest at least 15 have been killed in an attack at Sardar Dawood Khan hospital.
Read more

The official trailer for 2021's Forza Horizon 5 revealed a number of the cars, trucks, SxSs, and Baja racers that are coming to the new video game. Check out the list.
Read more

Gareth Southgate says England must look at themselves before...

Gareth Southgate says England should "get its own house in order" before criticising others for their behaviour.
Read more

The Labour leader accuses the pair of claiming to have been "miraculously selected" for a testing scheme.
Read more

House Minority Leader Kevin McCarthy's (R-Calif.) constituents are among those who have benefited most from the American Rescue Plan and other coronavirus relief funds, despite the top GOP member's criticism. ...
Read more

The One America News Network broadcast the phone number of New York Times reporter Rachel Abrams Thursday, accusing her of harassing the network, and inviting viewers to "feel free to reach out to the Times writer" in a v...
Read more

Starlink could start offering satellite internet in India by...

The satellite broadband segment in India is hotting up with Elon Musk's Starlink, Amazon and OneWeb all seemingly interested in offering services starting next year.
Read more

Rising crime in New York has gripped the mayoral...

For the first few months of New York City's Democratic mayoral primary, the campaign seemed to be trundling along in search of a defining issue.
Read more

After President Biden’s face-to-face meeting with Vladimir Putin in Geneva last week, I couldn’t help but think of my trip to Russia in 1993.
Read more

Watch some of the best shots as Queen's champion Matteo Berrettini beats Botic van de Zandschulp to reach the third round at Wimbledon.
Read more

News that a cub could be on the way at Tokyo's Ueno Zoo causes excitement among investors.
Read more

Brace yourselves. The maps are coming.

International Friendship Day is here and Disney is honored to reveal the first winners of the Disney Magic Makers contest! Marla Zwinggi, of Chagrin Falls, OH, and Stacey Bene, of Medina, OH, built a friendship that changed the lives of thousands of families …
Read more

A letter calls for care to have "its 1948 moment" to establish a "sustainable future" for the sector.
Read more

Tesla Inc (TSLA.O) chief Elon Musk is considering holding an AI Day in about a month, where the Silicon Valley billionaire will showcase the progress in AI software and hardware with an aim to recruit.
Read more

All 8 dead in tourist helicopter crash found in...

The Latest: Joint venture aims to make 1B doses...

A Chinese pharmaceutical company and BioNTech SE, the co-developer of the Pfizer-BioNTech vaccine, are setting up a joint venture in China with the capacity to manufacture up to 1 billion doses of the shot to protect against COVID-19
Read more

PMQs: Johnson and Whitford on ‘settled status’ scheme for...

Some people will not be able to work, rent property or access healthcare from next month, the SNP’s Philippa Whitford says.
Read more

What iOS 15 Can Tell Us About Apple’s Planned...

In the wake of the 2018 mass school shooting in Parkland, Florida, a new generation of teen activists emerged who insisted that the old boom/bust cycle of gun control politics in this country was no more.
Read more

The Dixie Fire has burned through more than 463,000 acres and could take weeks to extinguish.
Read more

US journalist jailed in Myanmar for months heads home

Most borrowers whose federal student loan payments were paused during the pandemic are set to restart their payments in October.
Read more

How Much Does It Cost to Buy a Home...

How Much Does It Cost to Buy a Home in the US: Prices Jump Most in 3 Decadesbloomberg.com
Read more

Some of the world’s biggest exporters in Asia are intervening to alleviate a shipping container shortage that jeopardizes their overseas trading.
Read more