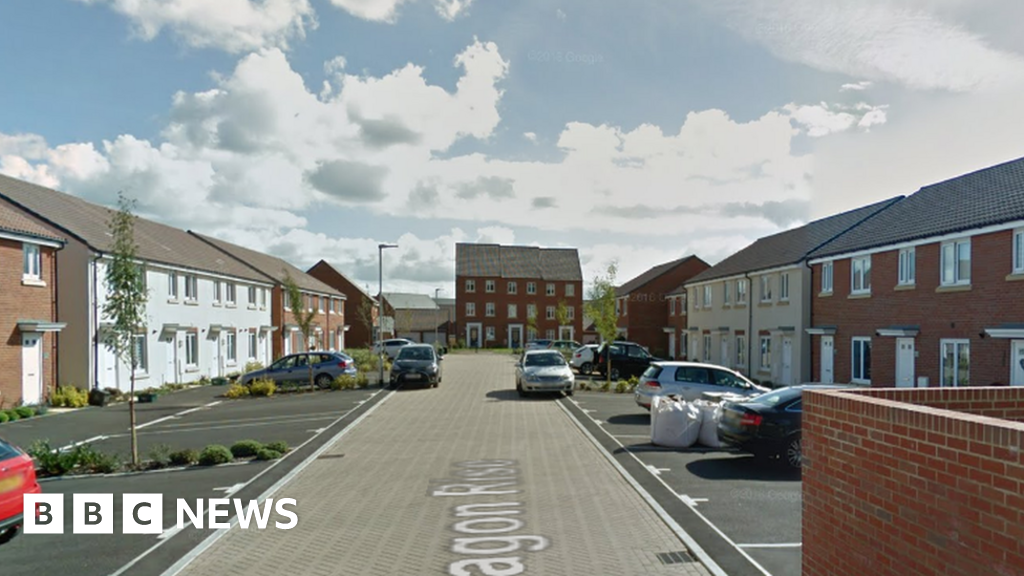 A murder inquiry has been launched after a man and a woman found with serious injuries in a property died.

Police were called to Dragon Rise in Norton Fitzwarren near Taunton, Somerset at about 21:45 GMT on Sunday. The man and woman, aged in their 30s, were pronounced dead at the scene.

Two young children were also inside the property and unhurt, Avon and Somerset Police said.

Two men, aged 34 and 67, have been arrested on suspicion of murder.

A police cordon is in place at two properties on the street while officers carry out a forensic examination of the scene.

A formal identification of the man and woman is yet to be carried out.

Det Insp Neil Meade, of the major crime investigation team, said: “The thoughts of everyone in the force this morning are with the families of the two people who sadly died last night.

“Two young children were inside the property at the time of the incident and while thankfully they weren’t hurt, they are understandably distressed at what has happened.

“They are being looked after and specially trained officers have been deployed to support the victim’s families in what is undoubtedly the most difficult of times.”

The force said that due to prior police contact with those involved, a voluntary referral will be made to the Independent Office for Police Conduct. Bipartisan support is growing on Capitol Hill for a Republican-led resolution condemning Iran's alleged human rights violations and sponsorship of militant groups in the Middle East.Lawmakers on Tuesday sent a lett...
Read more

A massive White House spending proposal on infrastructure and other domestic priorities is setting the stage for a potential lobbying blitz on Capitol Hill, particularly as more lawmakers embrace a return to earmarks.Lobbying shops on K Street are...
Read more

Monterrey secure a fifth Concacaf Champions League title, and a second in three years, with a 1-0 win over fellow Mexican side Club America.
Read more

A Chicago teenager and security guard were shot at...

A 14-year-old girl was seriously injured Tuesday when she and a security guard at a Chicago high school were shot, police said.
Read more

At a time when the media have largely moved on from the war--while the Taliban just barred female students from Kabul University--the Senate hearing with Mark Milley cast a much-needed spotlight on the calamitous end to our 20-year war.
Read more

Over 1,500 people have had to be evacuated as heavy rains, and the resulted flooding, have struck the south of Russia.
Read more

Democrats are setting up a massive December cliff as they punt several key deadlines to the back of the year.The party needs to fund the government to prevent a shutdown by Dec. 3, and it also faces another debt ce...
Read more

For the briefest of moments, Congress had what every middle schooler dreams of: rising popularity. And then, just like that, it was gone.
Read more

A Chicago man and his brother have been charged in a weekend shooting that left one police officer dead and another seriously wounded, the Chicago Police Department confirmed Monday.
Read more

Extreme heat and incoming tropical storm are the latest...

Weather is the latest element to not go right for the Tokyo Olympics.
Read more

World Cup quiz: Can you name the global stars...

Can you name the 12 stars we have picked who never played at a World Cup finals? Take our quiz and test your knowledge.
Read more

Chelsea defender Ben Chilwell talks to MOTDx about Chelsea's end-of-season games and says he is most nervous about facing former club Leicester in the FA Cup final.
Read more

Reacting to the Cosby mistrial, attorney Gloria Allred warned "you can never underestimate the blinding power of celebrity." Allred, who represents numerous women who have accused the comedian of sexual assault, says she hopes more witnesses and accusers will…
Read more

Kai Havertz struck shortly before halftime to give Chelsea a deserved 1-0 lead over Manchester City in a wide-open Champions League final on Saturday.
Read more

Torrential downpours in Italy brought on by flash flooding and landslides in the Lake Como area have damaged roads, vehicles and structures.
Read more

Marwa Elselehdar: ‘I was blamed for blocking the Suez...

Egypt's pioneering ship captain has been targeted over false rumours about her role in the incident.
Read more

James Anderson has Cheteshwar Pujara and Virat Kohli caught behind in consecutive deliveries as India fall to 104-3, trailing England by 79 runs on the second day of the first Test at Trent Bridge.
Read more

Buying a Samsung phone this Black Friday? Here’s how...

Got your eye on the Samsung Galaxy Z Flip 3? This deal will be the way to go right now with unlimited data and a freebie.
Read more

Principal Celtic shareholder Dermot Desmond says "wrong calls" have been made this season but is backing the current board to restore success.
Read more

Pfizer asks regulators to give vaccine to kids as...

Seagate is working on new high-capacity HAMR drives and this time around it wants to ramp up production.
Read more

Arch Manning is one of the best high school quarterbacks in the nation. On Friday, he showcased what he can do with his legs.
Read more

Former Algerian President Abdelaziz Bouteflika has been laid to rest, quietly honored despite being forced from office in 2019 after two decades in power
Read more

A scientific team has traced the genetic makeup of lake trout, which should help rebuild populations of the prized fish in the Great Lakes and other North American waters
Read more

Tanzania's Prime Minister has dispelled rumors about President John Magufuli's health after days of wide speculation that he was ill with Covid-19.
Read more

President Biden said Thursday that the federal government is ready to step in to assist after a building collapsed in Miami, Fla., and left at least one person dead and 99 unaccounted for.Biden said that the Federa...
Read more

India's government said on Thursday it has inked a deal with domestic vaccine maker Biological-E for 300 million COVID-19 vaccine doses for 15 billion rupees ($205.62 million), the first such order for unapproved shots.
Read more

A 6-year-old girl was fatally injured while riding an amusement park ride in Glenwood Springs, Colorado, according to the Garfield County Coroner's Office.
Read more

At least 43 children have been reportedly killed by armed forces in Myanmar in the two months since the military junta seized power, according to Save the Children.
Read more

The trend of employees quitting their jobs and seeking better opportunities is no different for seasonal workers. In Michigan, the once crowded snow plow driving market is feeling the crunch as many positions go unfilled. Christina Ruffini has more.
Read more

The Italian government and UniCredit SpA are making progress in talks on a deal for the takeover of troubled lender Banca Monte dei...
Read more

Russia – the limits of freedom

In August, the BBC’s Moscow correspondent, Sarah Rainsford, was expelled from Russia – a country she’s reported on from the start of Vladimir Putin’s presidency over 2 decades ago. Now she’s been designated a ‘national security threat’ and barred indefinitely…
Read more

Olaf Scholz, a Social Democrat, will serve as Germany's new chancellor, replacing Angela Merkel and marking the first time in 16 years that the country will have center-left leadership.In the tim...
Read more

Ipswich Town sign striker Joe Pigott on a three-year contract after he turns down a new deal with AFC Wimbledon.
Read more

Experts sound off on the media’s ‘negative’ or absent...

Media experts argue that the Fourth Estate's take on faith is tenuous at best and often tainted by politics, particularly in light of a series of controversial reports on President Biden's Catholicism.
Read more

Some clubs will trial designated safe standing areas before the end of the season, the BBC understands.
Read more

French officials say millions of French citizens, led by a lineup of presidents and prime ministers from more than 30 countries, marched in the streets of France in a defiant response to last week's terror attacks. But France is now facing some hard questions…
Read more

Facebook Is Willing to Open Algorithms to Regulators, Clegg...

Facebook’s chief spokesman said the company is willing to subject itself to greater oversight to ensure its algorithms are performing as intended and aren’t harming users.
Read more

MPs vote to stop flights where the journey could be made by train in under 2.5 hours.
Read more

George Kliavkoff had a lot on his plate in his first couple of months as Pac-12 commissioner — visiting campuses, discussing possible expansion of the College Football Playoff and athletes now being able to profit off their names, images and likenesses. That …
Read more

His comments come as CNN reported Thursday that the Trump administration Justice Department secretly obtained the 2017 phone records of one of their correspondents, the latest revelation of an apparent leak investigation aimed at identifying a journalist’ s s…
Read more

Covid in Scotland: ‘Heartless’ quarantine decision to be re-examined

Public health experts are urging the Biden administration to harden the federal government for future crises, warning that the U.S. is not prepared for the next pandemic.The White House says it is laser-focused on bolstering the government’s ability...
Read more

The results of a Panelbase poll suggesting gains for pro-independence parties appear in the Sunday papers.
Read more

Drones allowed this photographer to capture synchronized swimming like...

The scene is viewed from above: Eight women in white halter bathing suits and matching swim caps form geometric shapes in a pristine turquoise swimming pool. They cascade like dominoes on the diagonal, join their arms and legs in kaleidoscopic compositions, a…
Read more

Some families are struggling to get vaccines for vulnerable teens, nearly a month after they became eligible.
Read more

Barbados prepares to cut ties with the Queen

Watch Celestina Olulode as she travels to the island to find out what Barbadians make of the move.
Read more

Michigan Gov. Gretchen Whitmer (D) on Thursday announced that all COVID-19 restrictions in the state would end on June 22.In a press release, Whitmer pointed to decreased positivity rates and continued vaccination...
Read more

The collapse of a high-rise condo tower in South Florida early Thursday morning has left at least four people dead and 159 more currently unaccounted for. Now, as the search for survivors continues, a critical question looms: What caused the building to fall?
Read more

But he said the administration would remain flexible based on the data as it comes in.
Read more

Derek Chauvin, the former Minneapolis police officer who knelt on George Floyd’s neck for more than nine minutes last May, will soon learn his fate, after the jury in his politically explosive murder trial told the judge it had reached a verdict.
Read more

Shares have fallen in Asia as surging prices of oil, coal and other energy fan fears over inflation
Read more

Asian shares are higher, powered by encouraging signs that the U.S. economy is recovering from the pandemic
Read more

Jerome Powell picked to stay as US Federal Reserve chair