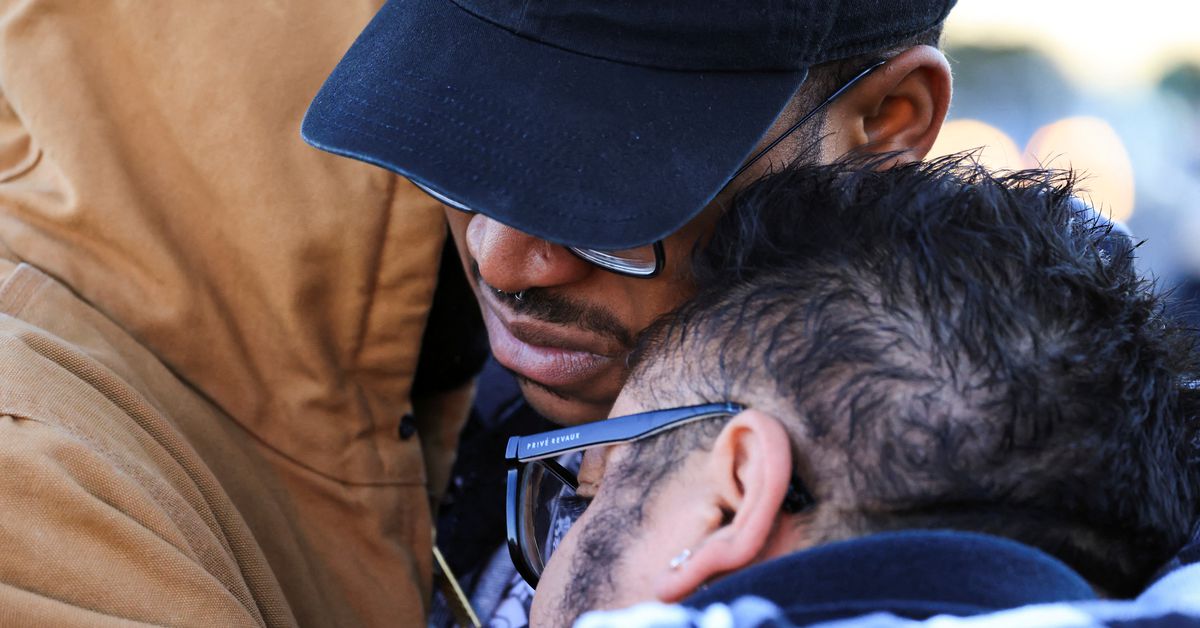 COLORADO SPRINGS, Colo., Nov 21 (Reuters) – Police in Colorado Springs on Monday were expected to release more details about the weekend shooting at an LGBTQ nightclub that killed five people and injured 25 more in what rights advocates suspect was a hate crime.

Further details could also emerge about the patrons whom police called heroes for rushing the gunman and halting the attack late Saturday night at Club Q in Colorado’s second largest city.

Police said they would hold a news briefing by noon (1900 GMT). Authorities on Sunday said they were investigating whether the attack was motivated by hate.

They identified the suspect as Anderson Lee Aldrich, 22, and said he used a “long rifle” during the brief but deadly attack. Multiple firearms were found at the scene, police said.

Police said at least two people subdued the gunman shortly after he burst in just before midnight, preventing further carnage, but did identify them nor say whether they were shot or injured.

One of the patrons grabbed a handgun from the shooter and pistol-whipped him with it, and was still on top of the suspect, pinning him down, when police arrived, Colorado Springs Mayor John Suthers told the New York Times.

“It was quite something. It happened quite quickly. This individual was totally disabled by 12:02. That had a lot to do with the intervention of these patrons,” Suthers told the Times.

Suthers also said the shooting “has all the appearances of being a hate crime.”

While President Joe Biden acknowledged no motive had been established, he noted in a statement that LGBTQ people have been “subjected to horrific hate violence in recent years.”

The shooting was reminiscent of the 2016 Pulse club massacre when a gunman killed 49 people at the gay nightclub in Orlando, Florida, before he was fatally shot by police.

Club Q, a long-standing venue in a modest strip mall, was described by many as a safe haven for the LGBTQ community.

One of the victims was identified as Daniel Aston, 28, a transgender man and bartender at the club who also performed in shows as a dancer, according to a Colorado Public Radio interview with his mother, Sabrina Aston.

“He was the happiest he had ever been,” Sabrina Aston said. “He was thriving and having fun and having friends. It’s just unbelievable. He had so much more life to give to us and to all to his friends and to himself.”

Anxiety within many LGBTQ communities in the United States has risen amid a divisive political climate and after a string of threats and violent incidents targeting LGBTQ people and events in recent months.

“America’s toxic mix of bigotry and absurdly easy access to firearms means that such events are all too common,” said Kevin Jennings, chief executive of Lambda Legal, a gay rights group.

Colorado has a grim history of mass violence, including the 1999 shooting at Columbine High School, a 2012 rampage inside a movie theater in a Denver suburb and a supermarket attack that killed 10 people last year.

Colorado Springs suffered a mass shooting in 2015 when an anti-abortion gunman killed three people and injured nine at a Planned Parenthood facility.

London’s next fibre networks could be sewer-powered

In India, businesses are increasingly spamming users on WhatsApp

The Great Resignation is starting to slow down, but...

Meta is reportedly scaling back plans for its AR...

Obama on Trump: 1 Presidential Term is Okay, But...

Before our homes got smart: 7 vintage home gadgets...

UK Government’s Contempt for Institutions Blew up in Their...

Emery era up and running as Villa beat Man...

Biden to call for 3-month suspension of gas and...

London Marathon: Man running to thank those who saved...

Opinion: Biden makes the best of a lousy hand...

F1 race in Saudi Arabia to go ahead despite...

Justin Bieber Kept Censors On Their Toes With ‘Peaches’...

The Choco Taco might not be discontinued after all

The trouble with Truth Social’s war on Big Tech...

2 dead and 3 wounded in shootings at four...

Taking Final Fantasy 15 away from the Deus Ex...

Eight years into his tenure, Satya Nadella looks to...