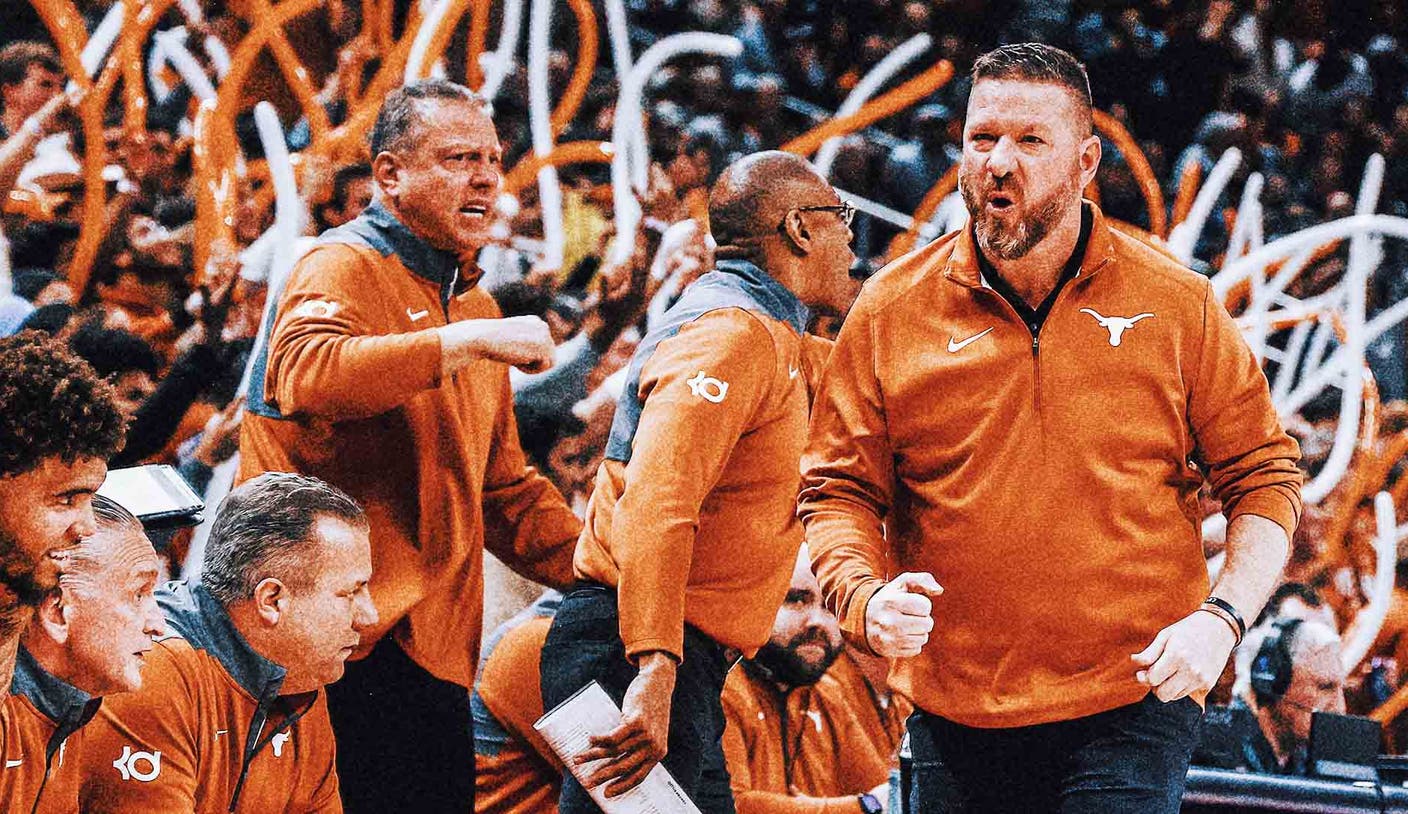 Two weeks into the men’s college basketball season, this is what we know:

1. Chris Beard has a legit Final Four contender in Year 2 at Texas. I know we can’t always read into one result, but the 93-74 rout of Gonzaga was telling. Tyrese Hunter scored 26 points, showing that last season’s Big 12 Freshman of the year at Iowa State is the perfect playmaker to put next to Marcus Carr. This squad can defend and run the floor, and has options at every position. Texas should be a top-five contender when the poll comes out Monday.

2. Arkansas’ Trevon Brazile may have already had the dunk of the season, coming against South Dakota State. The jam was flat-out nasty.

3. Houston coach Kelvin Sampson isn’t just one of the best developmental coaches, but he has always been able to recruit and find sensational talent. Jarace Walker is a star, and one of the main reasons the Cougars are going to be in the chase to play the Final Four at home, no less.

4. Jalen Wilson has become a leader and a go-to scorer for Kansas, but the key could end up being the continued development of Gradey Dick. The Jayhawks were led by these two late in the win over Duke at the Champions Classic in Indianapolis.

5. Michigan State should have been ranked. The Spartans had Gonzaga beaten before losing by one on the USS Abraham Lincoln. The Spartans beat Kentucky in a double-overtime thriller at the Champions Classic in Indianapolis. They then beat back Villanova in the Gavitt Games in East Lansing. The Spartans are playing like a top-10 team two weeks into the season.

6. Arizona State pulled off the stunner of the week. The Sun Devils won the Legends Classic without Marcus Bagley by dominating Michigan in Brooklyn. The championship was much-needed good news for the Pac-12. The Sun Devils have every reason to believe they can be a player for a bid in March.

7. Illinois fans travel well, and the squad is as entertaining as any this season. Illinois beat UCLA Friday night in Las Vegas behind Terrence Shannon Jr.’s 29 points. The Illini crowd was rocking. This Illinois team, which includes a surprise player in Dain Dainja who is producing in the post, is clearly a contender in the Big Ten and beyond.

8. Indiana was/is the favorite in the Big Ten, and the road win at Xavier will grow in significance this season. Trayce Jackson-Davis, a Big Ten and national player of the year candidate, scored 30 in the win. The Hoosiers have a legit shot to be No. 1 if they can take out North Carolina at home on Nov. 30, pending what happens ahead of them in the polls next week.

9. The most important postgame comments came from Virginia coach Tony Bennett after the Cavaliers’ 86-79 win over Baylor in Las Vegas. Bennett spoke from his heart in his team’s first game after the tragic murders of Virginia football players Devin Chandler, Level Davis Jr., and D’Sean Perry. The tragedy is enormous and hard to fathom. But Bennett found the right words to express his grief on behalf of the program.

10. The SWAC took advantage of its opportunities with the Legacy Series with the Pac-12. Southern University won at Cal. Prairie View beat Washington State at home. Texas Southern took down Arizona State at home. Grambling beat Colorado at home. Credit the Pac-12 for playing the series, especially with the road games. But the SWAC proved that if given the chance, it can be highly competitive and win.

11. Frank Martin can get it done, regardless of location. Martin had success at Kansas State and South Carolina, the latter taking the Gamecocks to a Final Four. Now, his UMass Minutemen headed into a Sunday game against Charlotte in the Myrtle Beach Invitational at 3-1 with wins over Colorado and Murray State. The Minutemen should be relevant this season in the A-10.

12. Kevin Willard is going to win at Maryland. The Terps started 4-0, capped off by a convincing win over one of the A-10 favorites Saint Louis. Donta Scott, who has a chance to be an all-Big Ten player, scored 25. The Terps will be a tough out all season.

13. Momentum is hard. UC Irvine won at Oregon last week, then lost to Pepperdine a week later. Portland and Oregon State were feeling quite well about their respective starts but then lost to Seattle and Portland State, respectively. DePaul won at Minnesota and then lost to Santa Clara.

14. Daryl Banks III is a baller, regardless of school. Banks scored 27 points in 15-seed Saint Peter’s historic upset of 2-seed Kentucky last March in the first round of the NCAA Tournament. Now at St. Bonaventure, Banks scored 34 in a win over Bowling Green. Mark Schmidt always has a bucket-getter, especially in the backcourt. Banks is his latest.

15. Rutgers lost to Temple, but Caleb McConnell hasn’t played a game yet this season. The reigning Big Ten defensive player of the year is still nursing a knee injury. This was the Scarlet Knights’ only loss, but they can’t be truly judged until McConnell is healthy.

16. The best performance in a loss may have been Eric Williams’ 43/13 for San Diego in a 91-89 overtime loss to Utah State at the Jenny Craig Pavilion. Steve Lavin has a stat stuffer in Williams.

17. Remember Iowa’s win at Seton Hall. This will be a shelf-life W that will have significance in March. It also marked the arrival of Kris Murray as a star. He dropped 29 for the Hawkeyes.

18. Alabama has a fantastic freshman in Brandon Miller. He’s averaging 20 through four games for the Tide in advance of the PK85 next week against Michigan State.

19. Keyontae Johnson is a walking miracle and I won’t stop promoting his production. Johnson continues to marvel. One week after scoring 16 against Cal, he dropped 19 against Kansas City. Johnson was not supposed to play again after collapsing while playing for Florida on Dec. 12, 2020. Now at Kansas State, he’s flourishing. Love it.

20. Try to make sense of Colorado. You can’t. The Buffs beat UC Riverside, but lost at Grambling. They beat Tennessee in Nashville, but lost to UMass in Myrtle Beach. Then they blasted Texas A&M behind KJ Simpson’s 30 and six steals.

21. The reigning National Player of the Year Oscar Tshiebwe was supposed to play limited minutes against Michigan State. The Kentucky forward played 34 minutes, dropping 22 points and grabbing 18 boards before fouling out. Ballin’. Oh, and he’s also gracious and a super ambassador for Kentucky and the game.

Andy Katz is a longtime college basketball writer, analyst and host. He can be seen on the Big Ten Network, as well as March Madness and NCAA.com, and he hosts the podcast “March Madness 365.” Katz worked at ESPN for nearly two decades and, prior to that, in newspapers for nine years. Peacock looks to original movies, a Lionsgate partnership, and...

Agility’s next Digit robot will have a face and...

Apple’s redesigned iPad is mostly worth the higher price

25 New Resources to Help You Plan Your Next...

Crossboundary gets $25M for solar mini-grids in Africa –...

Viktor Bout: Who is the Merchant of Death

US says Russia lying about chemical plot to set...

Tom Brady is returning to Tampa to play 23rd...

Sanders answers debt relief criticism: ‘The solution is not...

Man accused of killing 6 in Wisconsin parade due...

Migrante steps on the gas of vehicle leasing for...

Man helps save woman aboard JetBlue flight after she...

What’s the easiest fitness tracker to use?

Disney Cast Life Celebrates the Opening of ‘Avatar: The...

Warning energy bills may rise above £4,000 in April

Kansas abortion vote: Why recount with such a large...

Rangnick says he has no regrets over taking Manchester...

Biden to commemorate anniversary of 9/11 attacks at Pentagon

Criminals stole over $1bn in cryptocurrency in just three...

Are volatilities of cryptocurrencies predictable?

Russia’s Sandworm Hackers Have Built a Botnet of Firewalls

BMW Expects Auto Profitability to Decline to 7% to...

The week an Apple event and YC Demo Day...

Woman Backed for Bailing on ‘Game of Thrones’ Wedding...

Home-Flipper Opendoor Hit With Losses in Echo of Zillow...

Gregg Berhalter urges USMNT to play with fire vs. Wales: 'We want...

'Smith's kick dead stopped me in my tracks'