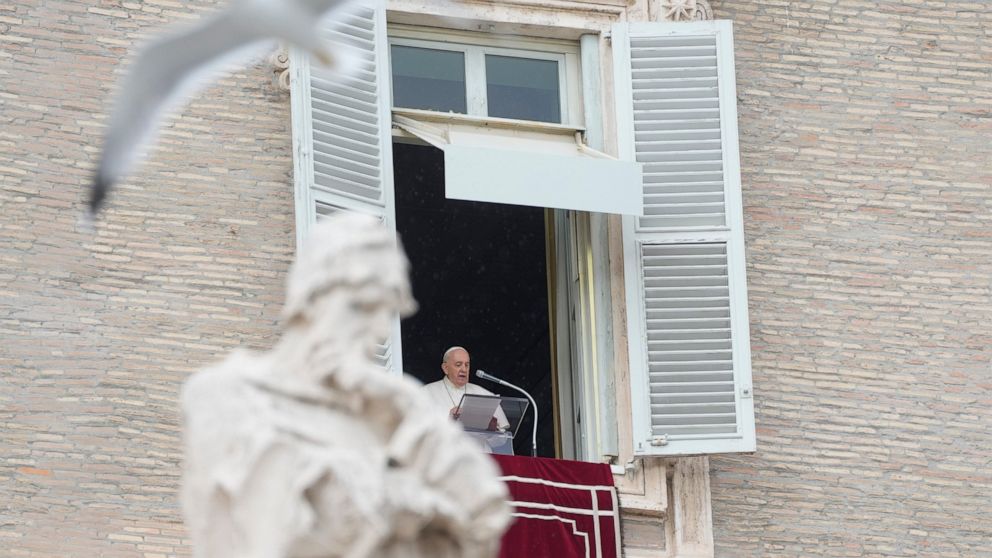 Francis in remarks to the public in St. Peters Square said the cry of the poor, united to the cry of the Earth, resounded in the last days at the United Nations COP26 summit on climate change.

I encourage all those who have political and economic responsibilities to act immediately with courage and farsightedness,” he said. “At the same time, I invite all persons of good will to carry out active citizenry to care for the common house,” Francis said, referring to planet Earth.

The pontiff didn’t comment on the outcome of the two weeks of U.N. talks.

Nearly 200 nations agreed to a compromise deal aimed at keeping alive a global warming target. But a last-minute change diluted crucial language about the use of coal, a fossil fuel whose use is the biggest single source of greenhouse gas emissions.

Francis has made attention to the Earth’s environment a major plank of his papacy, dedicating an encyclical, or major document, to the moral imperative of responsibly protecting the planet. Brighton 1-1 West Ham: Brighton can improve in both...

Brighton manager Graham Potter believes his side can "improve in both boxes" after his side's 1-1 Premier League draw with West Ham at the Amex Stadium.
Read more

Supply Chain Logjam to Drive U.S. Diesel Use to...

Take a look at U.S. diesel demand to see that the supply chain squeeze isnt going to end any time soon.  Demand for diesel...
Read more

PUBG Mobile India release date is still not clear according to reports from an IPO conversation for Nodwin parent company Nazara.
Read more

The push for cyber funding in Biden’s infrastructure plan

Kevin Riley on the Markets (Radio)

Here are the Macs left out in the cold with Monterey, with two years of MacBook models getting the elbow.
Read more

Lithuania says throw away Chinese phones due to censorship...

Lithuania's Defense Ministry recommended that consumers avoid buying Chinese mobile phones and advised people to throw away the ones they have now after a government report found the devices had built-in censorship capabilities.
Read more

A campaign group claims the "image-obsessed" platform is dangerous for children's health and privacy.
Read more

Clarence Williams III, star of ‘The Mod Squad’ and...

One of the first Black actors to lead a TV series, Williams died of colon cancer in Los Angeles on Friday.
Read more

"There's no doubt in my mind that these vaccines are going to get full approval because of the extraordinary amount of positive data," he said.
Read more

Now is the moment we’ve been waiting for: It’s...

I urge Congress to pass a comprehensive paid leave policy right away. Such a simple investment will make a real difference for children and families.
Read more

Imagine Dragons, one of the world's most successful rock bands, embraces vulnerability on their new album "Mercury - Act 1." Jamie Yuccas talks with frontman Dan Reynolds and the group about their emotionally charged songs, coping with grief and celebrating l…
Read more

Democratic lawmakers want to raise congressional staffer salaries in a bid to increase diversity and retain talent that is often lured away by the more lucrative private sector.In a letter to the House Appropriations Committee this week, a group of...
Read more

Anthony Scaramucci is joining CNBC as a contributor, according ...
Read more

Survivors of the Tulsa race massacre share their memories of Greenwood before a White mob attacked the affluent community 100 years ago in “Tulsa 1921: An American Tragedy.” The special airs Monday, May 31 at 10 p.m. ET on CBS.
Read more

Presented by Greater New York Automobile Dealers Association (GNYADA) Kathryn Garcia is surging in the mayors race, and with that surge is coming new...
Read more

The new president of the Tibetan exile government says he will do his best to resume a dialogue with China after more than a decade, and that a visit by the Dalai Lama to Tibet could be the best way to move forward
Read more

The Republican National Committee celebrated one of their most loyal employees Friday with a surprise birthday party for the 80-year old Maurice “Moe” Middleton.
Read more

49-year-old Kev Crane was discovered for his musical talents while he spent six weeks fitting bathrooms at the home of Paul Conneally, the owner of the record label New Reality Records.
Read more

Appeals court sides with CDC on COVID-19 rules for...

A U.S. appeals court has issued an order temporarily blocking a ruling from a federal judge in Florida last month that barred...
Read more

The World Health Organization said that with more than 580,000, the U.S. had the largest number of new cases.
Read more

Vice President Joe Biden, his family, President Barack Obama and 1,000 mourners paid tribute to the late Beau Biden this weekend as he was laid to rest in Delaware after losing his battle with cancer.
Read more

Russia’s defense minister has hailed joint war games with China this week as a sign of increasingly close military cooperation, and vowed to further bolster it
Read more

Announcer taking time off after comments on Black player’s...

Hochul Sworn in as N.Y.’s First Female Governor As...

Kathy Hochul was sworn in as governor of New York at midnight on Tuesday, officially making her the first woman to serve in the role. She takes over after three-term Democrat Andrew Cuomo resigned over a sexual-harassment scandal involving 11 women, most of w…
Read more

Country singer Morgan Wallen will be eligible for multiple awards at this year's CMA Awards, but not the show's top prize
Read more

The House passed legislation aimed at strengthening workers' rights to unionize in a 225-206 party-line vote on Tuesday evening.
Read more

U.S. launches new round of airstrikes

A Closer Look At Commodities (Podcast)

Sean Hannity slammed Biden for wreaking havoc for the U.S. and pointed out that he is unsuccessful at uniting his party to get the infrastructure bill through
Read more

The U.S Department of Agriculture (USDA) announced on Monday that it would be increasing Supplemental Nutrition Assistance Program (SNAP) benefits, also known as food stamps, by 15 percent through funds from Democra...
Read more

The government of ethnically split Cyprus is protesting to the United Nations and the European Union a decision by Turkey and breakaway Turkish Cypriots to re-open a residential section of an abandoned, military-controlled suburb
Read more

Martial law was imposed in towns across Burma after the country's bloodiest day since last month's military coup that resulted in the deaths of at least 39 pro-democracy protesters, according to a report.
Read more

Grenfell Tower: Families angry at lack of consultation over...

Bereaved relatives say they have not been consulted on when the tower will be taken down.
Read more

Activists have accosted Sen. Kyrsten Sinema, D-Ariz., on the plane and on her way to the bathroom, and they also plan to follow her at the Boston Marathon on Monday, pressuring her to support President Biden's $3.5 trillion reconciliation bill, the Build Back…
Read more

Biden: US to withdraw troops from Afghanistan

President Biden says after 20 years of military engagement in Afghanistan, it is time to end America's longest war. He says all US troops will leave the country by the 11th of September. Also in the programme: Denmark stops administering the AstraZeneca vacc…
Read more

It warns high energy costs could "strangle production" if the government doesn't step in.
Read more

Scientists are warning that climate change is already compounding the extreme heat battering the Pacific Northwest, and will do so even more as the planet continues to warm.Oregon and Washington ...
Read more

A police department has opened an investigation after live footage of one of its officers stomping on a man's leg was aired on Facebook.As local station ...
Read more

India, one of the world's top emitters of greenhouse gases, rejected calls for a net-zero emissions target on Wednesday, arguing that the world should focus on a plan for reducing emissions instead.India's environm...
Read more

Italy health chief distances himself from spiked WHO report

Yasmani Grandal hit a game-ending RBI single in the 10th inning and the Chicago White Sox beat Tampa Bay 8-7 on Wednesday, taking two of three from the Rays in a matchup of division leaders.
Read more

How could U.S. respond to new COVID-19 variant?

Some governments have already started imposing travel restrictions because of a new potentially dangerous COVID-19 variant detected in South Africa. Britain has banned flights from South Africa and other neighboring countries, and Israel and Singapore also an…
Read more

Turkey has stopped all citizens from Iraq, Syria and Yemen from flying from Turkey to Belarus.
Read more

Square Enix has announced it's hosting a showcase next week which will reveal the world premiere of the new Life is Strange and much more.
Read more

Experts predict a rise in serious cancers due to deferred screenings and treatments.
Read more

If you're looking for one of the most efficient cardio workouts that anyone can do anytime, anywhere, there is just one thing you need: a jump rope. Lauren Flymen has been documenting her one-year journey, and now her goal is to inspire others to pick up a ro…
Read more

NATO to Taliban: ‘We will not allow any terrorists...

NATO's foreign ministers on Friday issued a warning to the Taliban as the western military alliance works to ensure the safe evacuation of citizens from member countries as well as Afghan allies, saying that it will...
Read more

South Africa claim a 33-run victory over hosts Ireland in the first of three Twenty20 games between the sides this week.
Read more

Just a few tweaks from developers and publishers can go a long way to include more people and make games more fun for everyone.
Read more

The Biden administration is dispatching its top official on Israeli and Palestinian affairs to Israel as part of efforts to deescalate tensions that have erupted into military conflict with Hamas in the Gaza Strip....
Read more

The BBC will show the tie between Hanley Town and Brackley Town in the FA Cup third qualifying round on 2 October.
Read more

Central bank officials now expect the unemployment rate to drop to 4.5 percent by the end of 2021.
Read more

Will the US emulate China’s tech takedown? | TheHill...

Abortion providers are turning to the Supreme Court to block a Texas law that, if unchanged, will ban abortions as early as six weeks into a pregnancy.
Read more

Microsoft wants to rein in your potty mouth with...

Businesses will soon be able to train Microsoft 365 to detect threats, harassment and profanities.
Read more

Insider Trades Are So Good They Now Have a...

The German parliament will not extend the “epidemic situation of national scope” when it expires next month, but will keep in place certain measures to check the spread of the coronavirus
Read more

Dune’s release on HBO Max is reportedly being reconsidered

Holly Williams went to the frontlines in Ukraine's battle against Russian-backed rebels, where Ukraine's President Volodymyr Zelenskyy issued a warning for the U.S.
Read more

Mainstream media silent while Obama dances maskless in a...

"It's an absolute tragedy for our community," a police official said. "This 13-year-old was innocent."
Read more

Citigroup CEO Jan Fraser is moving to ban internal Zoom calls for staff members on Fridays in an effort to promote a healthier work-life balance and combat pandemic fatigue.Fraser also stated in a memo sent to employees on Monday that she will be...
Read more

Hackers have turned their attention to the researchers hunting...

Thousands of Tunisian citizens on Sunday rallied to support President Kais Saied's suspension of the parliament and promises to change the political system, ...
Read more

Pope: The poor are often victims of injustice