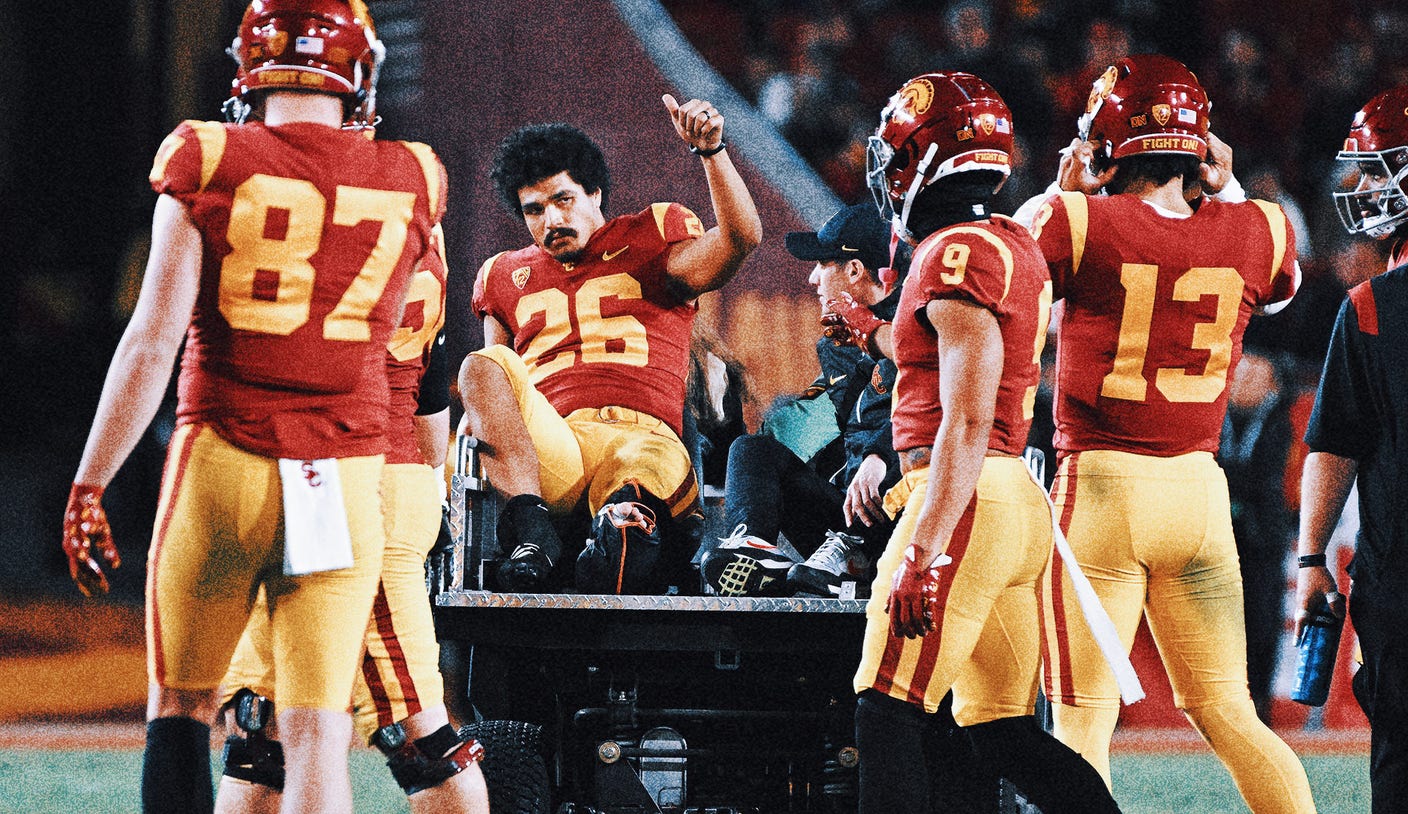 If the USC Trojans are going to stamp their ticket to the Pac-12 Championship Game and possibly the College Football Playoff, they’re going to have to do so without their star running back.

Travis Dye, who transferred to USC from Oregon this past offseason, was carted off the field after his left leg appeared to get twisted underneath him in the second quarter of the Trojans’ 55-17 win over Colorado on Friday night.

USC head coach Lincoln Riley said he does not expect Dye to play again this season.

Dye stayed down on the field after suffering the injury, and was eventually placed in an air cast and lifted onto the cart. Every player on USC’s sideline poured onto the Coliseum field to surround the cart transporting Dye off the field.

“Theres no way we would be sitting here as a football team if it wasnt for him,” USC coach Lincoln Riley said.

Dye had rushed for 26 yards on nine carries before the injury occurred. He has totaled 884 rushing yards and nine touchdowns, while averaging 6.1 yards per carry this season.

USC will likely turn to Stanford transfer Austin Jones and freshman Raleek Brown to carry the backfield. Jones had 74 yards on 11 carries to lead the Trojans Friday night, while Brown had 52 yards on seven carries. EXPLAINER: Why the British public is not choosing its...

Beekeeper, which helps companies engage with their ‘deskless’ frontline...

The rich get richer: Rethinking Bitcoin’s power as an...

Patient from Missouri dies after contracting brain-eating amoeba while...

US sees risk of COVID supply rationing without more...

Russia defends veto of aid to northwest Syria for...

Russia Admits It’s Running Out of Weapons in Ukraine...

Bob Saget cause of death revealed

Streaker tackled by Rams linebacker during game against 49ers

Garuda Indonesia halves debt with restructuring, on track for...

Amazon’s cashierless Go stores are coming to the suburbs

Sale of Angels could bring welcome change for fans...

Ukraine war: Western agents seek to get inside Putin’s...

Trump confidant Barrack says presidency was “disastrous” for his...

People with autism or ADHD are more likely to...

Why Is No One Worried About Re-Arming of Japan...

What Yankees’ struggles mean for their title chances

Luka Doncic put the Suns’ Cam Johnson in a...

Kimberly Williams-Paisley reveals the ‘greatest job’ she’s had and...

Quantum computers may be able to break Bitcoin sooner...

HackerRank, a platform for recruiters to test coders and...

Ronny Persson: ‘How hard can it be to throw...

Where the MV migrants are now

Google will reimburse developers $90 million to settle a...

Rivian recalling nearly all its vehicles over loose fastener

US Marine Osprey aircraft missing with 4 on board...

Texas vs. Oklahoma State: Storylines to watch ahead of...

Iranian who made Paris airport home for 18 years dies