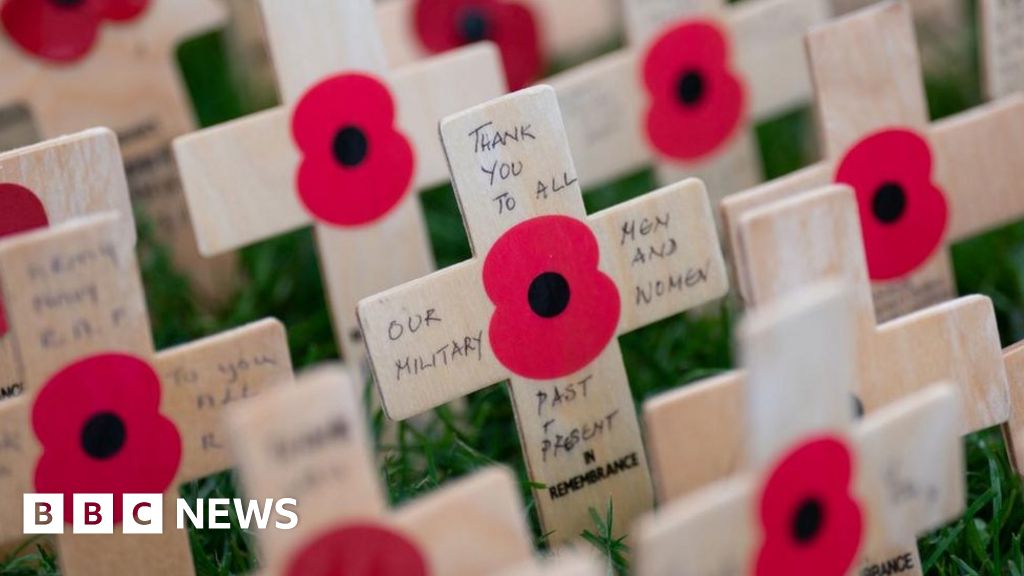 The UK will mark Armistice Day with a two-minute silence on Friday.

This year’s commemorations to remember the war dead will include the recently restored Big Ben striking 11 times.

Remembrance Day services will be held on Sunday, including one attended by the Royal Family at the Cenotaph – the first since the death of the Queen.

During the service, which the Prince and Princess of Wales will also attend, King Charles will lay a poppy wreath incorporating a ribbon of his racing colours of scarlet, purple and gold.

Royal racing colours were also incorporated into the wreaths of the late Queen, George V and George VI.

A wreath will also be laid on behalf of Queen Consort for the first time, while she watches from the balcony of the Foreign, Commonwealth and Development Office building.

Prince William will lay a wreath previously laid by his father, featuring the white Prince of Wales feathers and a new ribbon in Welsh red.

Big Ben will strike 11 times at 11:00 GMT on Friday and also on Remembrance Sunday to mark the beginning of the two minutes silence.

The bell has been largely silent for five years after it was dismantled and repaired in a renovation project.

During her 70-year reign the late Queen, who lived through World War Two, only missed seven Remembrance services – including in 2021 due to a back sprain.

The Royal Family will also attend the annual Royal British Legion Festival of Remembrance at the Royal Albert Hall on Saturday evening.

Image caption, King Charles (then Prince of Wales) at the National Service of Remembrance in 2021

NASA’s Artemis I mega moon rocket heads back to...

Elon Musk says Starlink has been approved in Nigeria...

Bank of America puts aside $200mln for probe into...

HBO just canceled another comedy with 100% on Rotten...

Queen Elizabeth II’s funeral: What will happen in Windsor?

Science Is Redefining Motherhood. If Only Society Would Let...

Why Should People Go To Church?

Ryanair Crew May Strike in Summer as Pay Talks...

Klarna, Affirm show how expensive fintech growth can be...

Celebrating A World of Voices at Walt Disney World

One of our favorite portable Bluetooth speakers is 30...

German police raid home over threats made to Austrian...

When TIME’s ‘Man of the Year’ Meant Something…

Beijing kicks off fresh round of COVID tests as...

Gen Zers don’t see the point in getting a...

Ray Dalio says Europeans have a ‘lower than average...

Fitbit will roll out a passive heart rhythm monitoring...

TikTok to overtake Facebook in influencer marketing spend this...

Christie calls out Trump for dining with anti-Semites

This Android malware could leave your wallet pretty empty...

Desperate NHS paying nurses up to £2,500 a shift