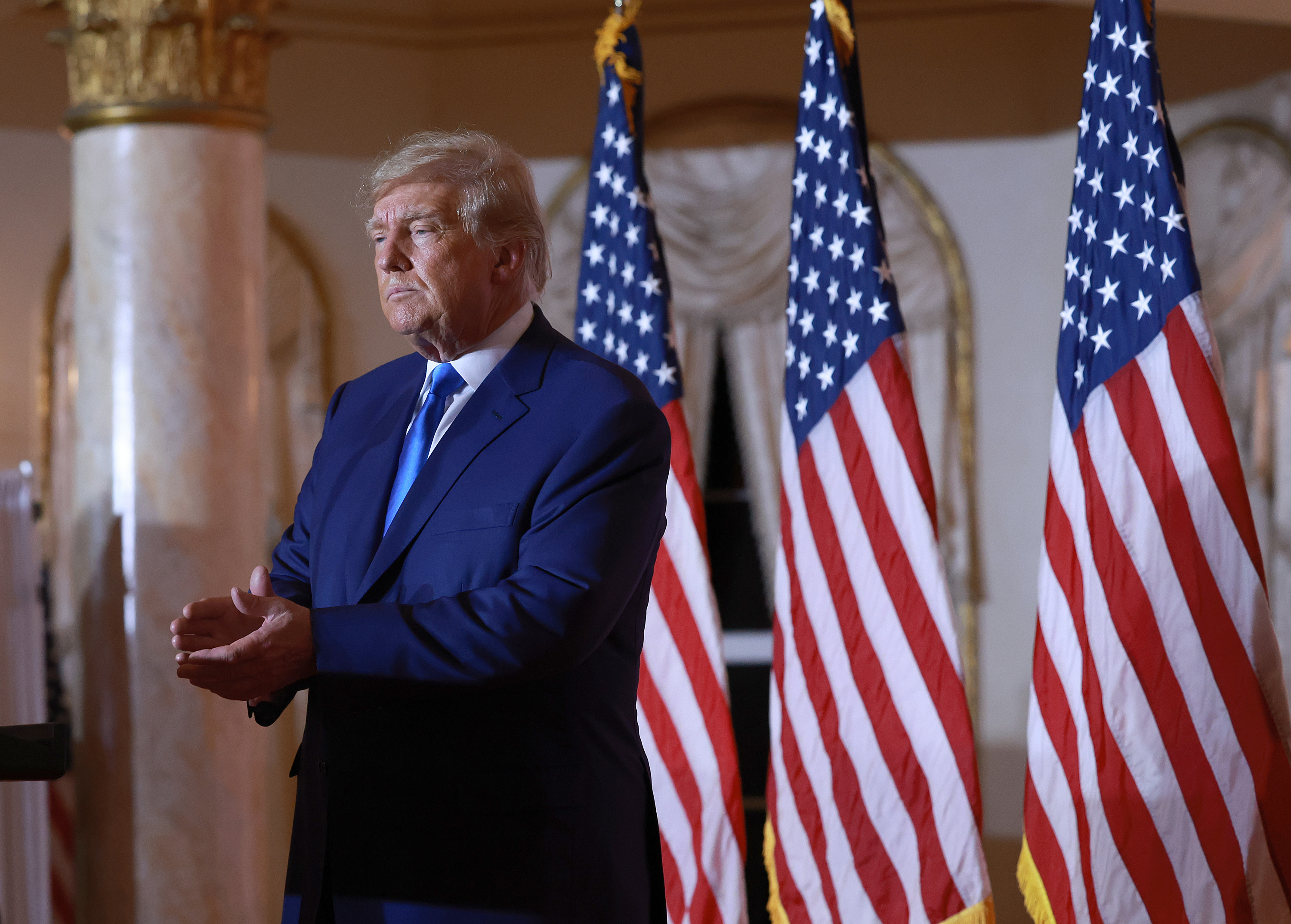 Biden got elected president to bring normalcy from chaos, and he hasnt managed to do it. But Republicans fell down at the task of looking normal themselves, with neophyte, underprepared candidates sometimes beholden to conspiratorial thinking in high-profile races and the ringmaster of it all a volatile force inclined to enjoy uncertainty and conflict.

Trump did his part to make the Senate primaries so treacherous and potentially painful that first-tier candidates incumbent senators, popular governors stayed out. Why should they risk the humiliation and psycho-drama? Then, Trump pretty reliably put his thumb on the scale for the riskiest and most flawed candidates who actually ran because they were willing to do the most to prostrate themselves to him, or they were celebrities, or both.

The party almost could have drawn its candidates by lot and not done any worse, and perhaps better, because some of the more appealing candidates would have won.

Litmus tests have their role in politics. They establish an orthodoxy in a political party, and once a party has uniformly adopted a position, the chances of it eventually getting realized in legislation or executive action goes up dramatically.

But there is no case for making a belief in or a willingness to pretend to accept Trumps lurid fantasies about the 2020 election the price for entry for winning a GOP nomination for federal office.

The more passionately sincere a candidate is about buying into the Trump view, the more likely it is he or she will lack mainstream appeal.

This accounts for the symbiotic relationship between Democrats and Trump this primary season. Democrats favored and supported MAGA candidates because they believed (rightly) that theyd be easy to beat; Trump supported them because they lined up with his obsessions and assuaged his ego.

In the future, the GOP might think twice about nominating candidates that the Democrats desperately want as opponents. Its true that Democrats erroneously made the same calculation about Trump in 2016, but that doesnt mean Republicans are going to get the same expectation-defying results with, say, a Don Bolduc or John Gibbs.

Trumps endorsements had all the hallmarks of his usual erratic and transparently calculating style.

He endorsed out of vengeance, and out of fear of being left out. He endorsed and unendorsed based on standing in the polls. He slyly endorsed at the end when it was clear that one of his adversaries was going to win.

The common thread through the endorsements, and much else, was the pursuit of his idiosyncratic personal interests.

What goal of the party was advanced by having candidates devoted to Trumps Stop the Steal gospel?

How did it contribute to the party to have Trump attacking one of its candidates, Colorado Republican Joe ODea, who was trying to make a blue state competitive? Or to insult the Senate minority leader and his wife?

Who did it help to have Trump teasing his potential presidential bid in the days before the election?

In what world was it helpful or appropriate for Trump to come up with a derisive nickname for a rising star in the party in the days before the election and then threaten him with damaging revelations?

In all these instances, of course, Trump was thinking only of himself. Republicans have looked past his selfishness in the belief that Trump is the GOPs unique electoral savior, a view that was dubious when he was at his height and is less convincing now.

You nominate FDR for a third time after hes won the first two times (and wash, rinse and repeat). You make a romantic icon of a promising young leader cut down in his prime, like JFK. You revere the two-term presidents, like Ronald Reagan and Barack Obama, who went out on high notes.

Its passing strange to become similarly devoted to a political figure who barely won a fluky presidential election, then lost a winnable reelection bid, before dragging the country through a bonkers attempt to overturn the result, with the episode ending in futility and bloodshed.

The natural response of a party to all this shouldnt be, Please, lets try that again, and in the meantime, allow the former president to be the most important arbiter of our political fate.

Its not a coincidence that the two most impressive Republican performers in the 2022 midterms, Brian Kemp and Ron DeSantis, were both governors who could forge an identity distinct from the partys national brand. They both had the opportunity as executives to demonstrate competence (and did). They both are hard workers and shrewd operators. And neither bent a knee to Trump; indeed, they got attacked by him.

It is telling that Trump was more favorably inclined to no-hoper Doug Mastriano, the Jan. 6-attending Pennsylvania gubernatorial candidate whose dreadful performance helped sink Mehmet Oz, than two conservative stalwarts whose electoral and governing success are a tribute to the party.

Trump doesnt have ideological differences with Kemp or DeSantis; its just that theyve defied him, so they must be destroyed. Kemp didnt bend to his will in the wake of the 2020 election, then crushed his hand-picked challenger, and DeSantis may challenge him for the 2024 nomination.

(If Trump had succeeded in knocking off Kemp with David Perdue in the primary earlier this year, he might have added electing Stacey Abrams to his resume.)

Kemp and DeSantis both show that being widely palatable and broadly normal dont require compromising or losing a combative edge. That Trump is incapable of pulling this balance off doesnt mean that it cant be struck.

Trump started out promising winning and now specializes in explaining away losses. He began as a stunningly fresh presence in American politics whose act now runs in well-worn ruts. He initially brought a focus to neglected issues that people cared about, but now devotes inordinate attention to his just-so story about 2020.

Elected Republicans who hope to have a future in the party are still too afraid to say what many of them think privately. They wont lead any anti-Trump effort, but will wait for the voters to give them permission by notably cooling on Trump. It hasnt happened yet, and perhaps wont even now.

The choice has come into clearer focus, though. There is the kind of Republicanism that Kemp and DeSantis represent, which has a demonstrated record of success, and then theres Trumps, which fell short again. Who knows what will happen between now and 2024, and what will be the exact circumstances in a general election? Perhaps Trump would be stronger than he looks now, but nominating a candidate that only 35 percent of people have a favorable view of would be a risk comparable to nominating Mehmet Oz, Herschel Walker, or Don Bolduc for the Senate.

And how has that turned out?

Opinion | How Donald Trump Played Himself

Florida sees rise in this flesh-eating bacterial infection after...

One Step Closer to Completion: Watch the Disney Wish’s...

Ivella is the latest fintech focused on couples banking,...

5 things to know today about the Russia-Ukraine conflict

Hydrogen – Just another hype or next big thing?

Niamh Mitchell: ‘Being bullied led me to boxing then...

CDC strategy on masks could haunt the country

Sanna Marin: How much partying is too much for...

Zion Williamson amazes, Lakers stumble: What we saw in...

Oil prices surge $5 per barrel despite release of...

COVID may be with us for a long time....

Why Miles Fowler is Leaving ‘The Resident’

Amazon buys the company that makes the Roomba vacuum...

They Thought ‘Crypto Banks’ Were Safe. Then Came Crash…

Tom Brady’s fury brings out the best in Buccaneers

Letter from Africa: The Afro-punk band taking on ‘whitewashed’...

Tucker Carlson: The US is in a recession, the...

Hochul considering ‘a lot of people’ to replace LG;...

Similarities uncovered among suspects in mass shootings in Buffalo,...

Spotify subscriptions can now be bundled with Soundtrap’s audio...

Amazon AMP preview: Like the app, my radio show...

FOP, The Rare Fatal Disease That Slowly Turns Your...

For ‘Fantastic Beasts’ series, a case of diminishing returns

Meta made a fact-checking AI to help verify Wikipedia...