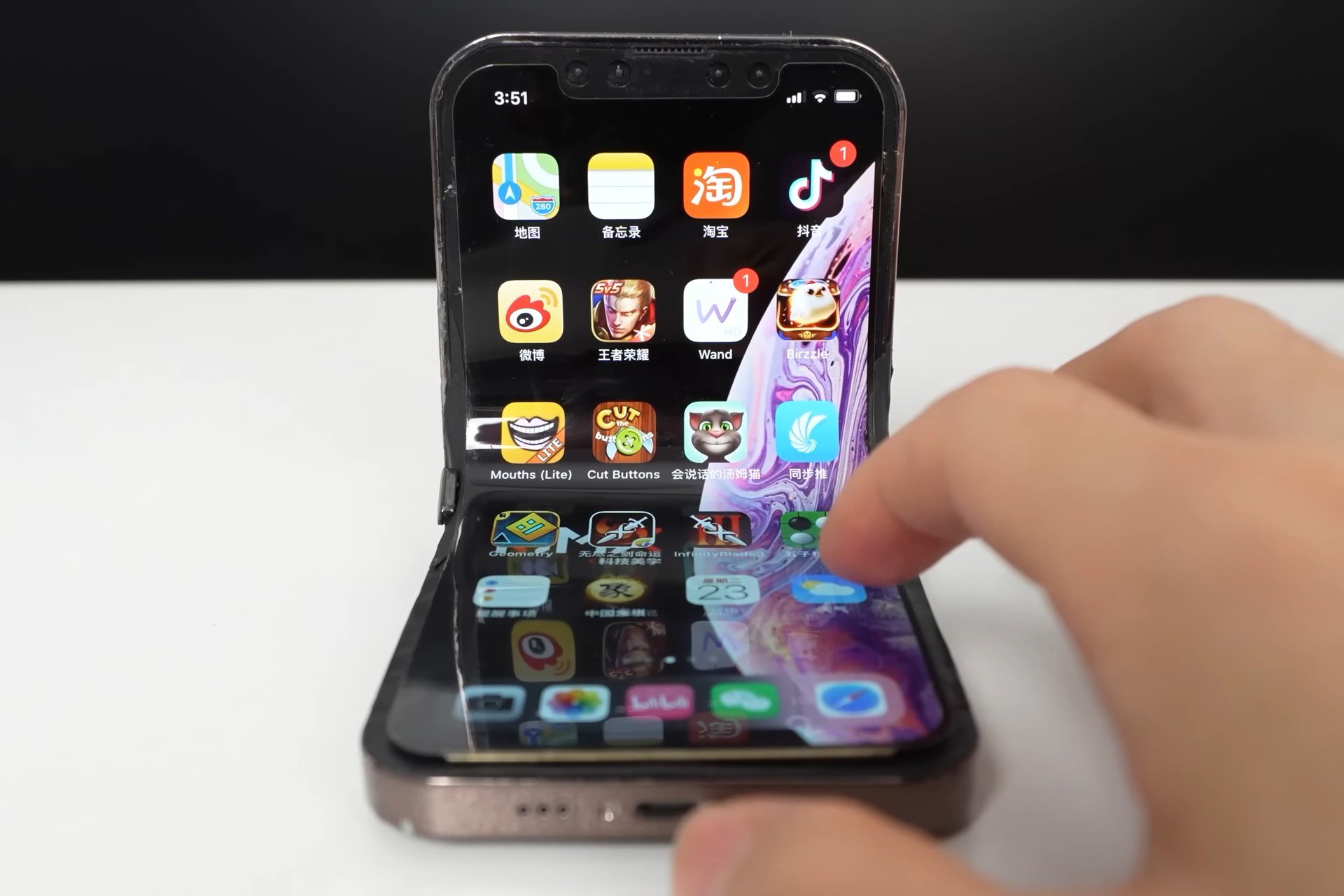 You don’t have wait for Apple to see what a foldable iPhone would look like in practice. China-based The Aesthetics of Science and Technology (AST) claims to have built a folding iPhone through heavy modifications. The engineers say they created the one-off with spare Motorola RAZR parts, their own 3D-printed elements and an iPhone X screen made more flexible by replacing the not-at-all-foldable glass and touch layers. An iOS jailbreak lets Apple’s software run on the handset and introduces suitable features like a split-screen mode.

The result is largely what you’d expect it looks like the love child of an iPhone and a Galaxy Z Flip, with all the compromises that come with an unofficial design. While the folding iPhone appears to work as advertised, there’s a cavernous gap when it’s folded. There’s a smaller battery, no wireless charging and just one speaker. As you’d guess, the design also loses water resistance and any kind of real-world durability. The modded iOS also clearly isn’t as optimized for flexible displays as Samsung’s software for the Galaxy Z series.

This effort might also warrant some skepticism. Gizmodo notes that the team glosses over some important steps, including the need to rearrange key internals. While there aren’t obvious signs that something’s amiss, the initiative isn’t definitive proof that a do-it-yourself folding iPhone is possible. It’s certainly a greater challenge than adding a USB-C port.

Rumors have suggested that Apple may introduce an honest-to-goodness folding iPhone as soon as 2023, making this hacked-together handset more of a (very rough) preview than a desirable item in itself. Just wait long enough and you may get a far better product. The mod illustrates Apple’s challenges, at least. A proper foldable iPhone would require major engineering changes and software tweaks to meet users’ expectations. There are also problems that even brands like Motorola and Samsung have yet to overcome, such as displays that crease and (in some cases) crack.

New ferry for Fair Isle among Scotland’s levelling up...

Hilton: Media, Dems are engaged in ‘smear’ campaign to...

Rishi Sunak: What we know about his family’s wealth

Hotels Taking Wellness to Extremes, From IV Drips to...

IKEA teamed up with Swedish House Mafia on a...

What’s Ald. Edward Burke up to?

College Professor Explains One Concept in 5 Levels of...

2 high-rise towers no one ever lived in get...

Does Elon Musk’s resignation from Twitter mean he’ll give...

There Is Some Good in ‘No-Recipe’ Cookbooks

Burkina Faso’s military leader agrees to step down after...

Apple reportedly plans to use US-made chips starting in...

BioNTech and Pfizer to Work on Shingles Shot in...

Omicron Becomes Reason to Normalize Approach to the Virus

NewMed pushing forward with Capricorn merger ahead of Feb....

Timeline: The disappearance of Maya Millete

Plane bumps another while backing up at Boston airport