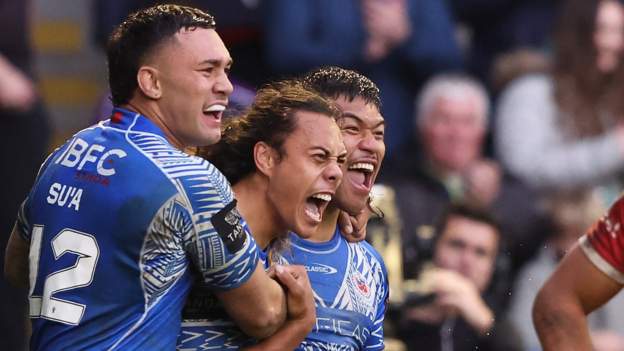 Samoa set up a World Cup semi-final meeting with England after edging a pulsating encounter against Tonga in Warrington.

Samoa will now face England at the Emirates Stadium on Saturday. Documents found by Fiji on superyacht implicate its Russian...

Evacuations of civilians hiding in steel plant in Mariupol...

Google’s Pixel phones had their best quarter ever

UK heatwave: The unusual things happening because of the...

Sound On: Mask Mandates and Disney vs. Florida (Podcast)

Google Pixel 7 will have a disappointing lack of...

Latest on the winter storm hitting part of the...

Medical examiner on stand at officers’ trial in Floyd...

Birmingham 2022: Esports to be included as pilot event...

Google and the Internet Archive are the first customers...

Zoi, a preventive care startup co-founded by a former...

Who Is Zawe Ashton? 5 Things to Know About...

Another Proud Boy who stormed the Capitol on Jan....

What Is The State Of The Union Address?

Lyft is shutting down its in-house car rental program

GOP Sen. Scott signals he is willing to consider...

Key inflation gauge tracked by the Fed remains a...

Two of the world’s greatest economists disagree on whether...

US Jobs Growth Blows Past Estimates

5 reasons why you should pick a smart appliance...