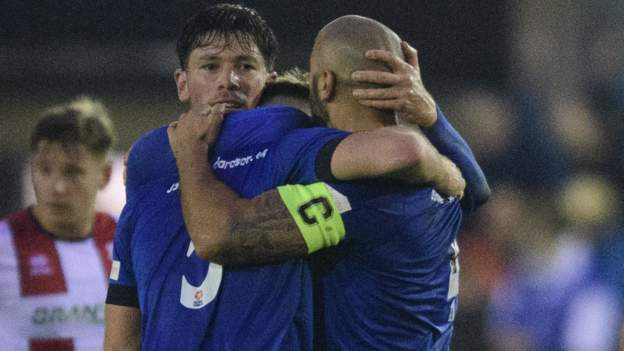 Chippenham Town manager Gary Horgan said his side “embraced the magic of the FA Cup” to help overcome League One Lincoln City in one of the shocks of the first round.

Horgan described the win as “the proudest day of my life”.

“I can’t claim credit for it, it was a real team effort,” he told BBC Radio Wiltshire.

“The players have to pull off a game plan – the coaching staff, the analyst, we’re the sum of all our parts.”

Despite Lincoln, 78 places above their hosts in the pyramid, dominating possession, sixth-tier Chippenham had more shots on target, with Joe Hanks’ cutely-taken goal just before half-time proving enough.

“We felt very confident having watched them that, if we set up correctly, embraced the magic of the FA Cup and used the adrenaline our players clearly got from it, we could frustrate them and would be good enough to create,” Horgan said.

Chippenham’s win followed three successive league defeats. They are precariously close to the relegation zone in National League South and Horgan said their exploits in the FA Cup have been a “lovely distraction”.

“Up until a week ago we were sitting in mid-table comfortably and we had three games in a week and played the best we’ve played since September,” he said.

“We’re not getting carried away with it. First things first we’d love a home tie [in the second round] – it would be nice to have a local tie like Bristol Rovers, but anybody at home.”

‘A special goal for a special occasion’

For Hanks, his goal and the nature of it – a back-heel from six yards out – thrust the midfielder into the limelight.

The 27-year-old, who played in League Two during a spell with Cheltenham Town earlier in his career, said his finish was down to instinct.

“I didn’t really have the chance to think about it. It was bobbling around. It was instinctive. I was absolutely delighted,” he told BBC Radio Wiltshire.

“I can’t describe how I was feeling – a back-heel, it was a special goal and occasion.

“There’s always a team that causes an upset and for it to be us is a special feeling. It’s the magic of the FA Cup for us to be able to do it. It is a superb achievement.”

‘We want the biggest club we can get’

Chippenham’s run to the second round has banked them around £60,000, with Saturday’s triumph adding around £41,000 to the coffers.

Chairman Neil Blackmore called the windfall “unbelievable” but said the money has already been accounted for to mitigate against the financial pressure of rising energy and living costs.

But he hoping his side’s performance has convinced many of the 2,000 supporters that watched Saturday’s win to return during the rest of the season.

“The fans were fantastic,” he said. “They help you fight when you’re tired and help you get over the line.

“If they watched the football they will definitely come back. They need to tell their friends, relatives and neighbours how good it is here.”

Blackmore said getting to the first round was “a dream” now with the club’s first-ever second round tie on the horizon, he is adamant about what sort of tie he’d like.

“I want the biggest club you can possibly get. Here at home,” he said.

Chippenham have never reached the third round of the FA Cup ‘The DioField Chronicle’ is a new strategy RPG that...

Democrats’ Best-Case Scenario for the Midterms

What we know about the armed bystander who killed...

Ukraine: Why so many African students were in the...

Egypt beat Cameroon on penalties to set up Senegal...

Inside poll worker training sessions where election officials are...

Climate group who threw mashed potato at a Monet...

Tulsi Gabbard: Parents should have the right to raise...

China launches a COVID-19 vaccine inhaled through the mouth

A Michelin-starred chef in the U.K. says his energy...

Convictional grabs another round of funding to help retailers...

No One Knows How Safe New Driver-Assistance Systems Really...

Dozens feared dead after ship sinks in storm off...

Inside Hikvision lobbyist’s game plan to fend off sanctions

Chatty AI and Protein-Predicting Algorithm Defined the Year in...

Stocks Open Mixed Ahead of Fed Meeting – The...

Dog sniffs out cocaine hidden in wheelchair at Milan...

Tottenham ‘lucky’ to have Harry Kane but how many...

Resistance, attrition, quiet quitting, and a drop in diversity:...

Love Island: Laura Whitmore steps down as host of...

Crying at work is more than okay, it’s an...

Frank Vogel responds to report that he’ll be fired...

Biden holds back on going after GOP on Russia,...

Kyiv prepares for a winter with no heat, water or power

5 tensions that could derail the climate conference