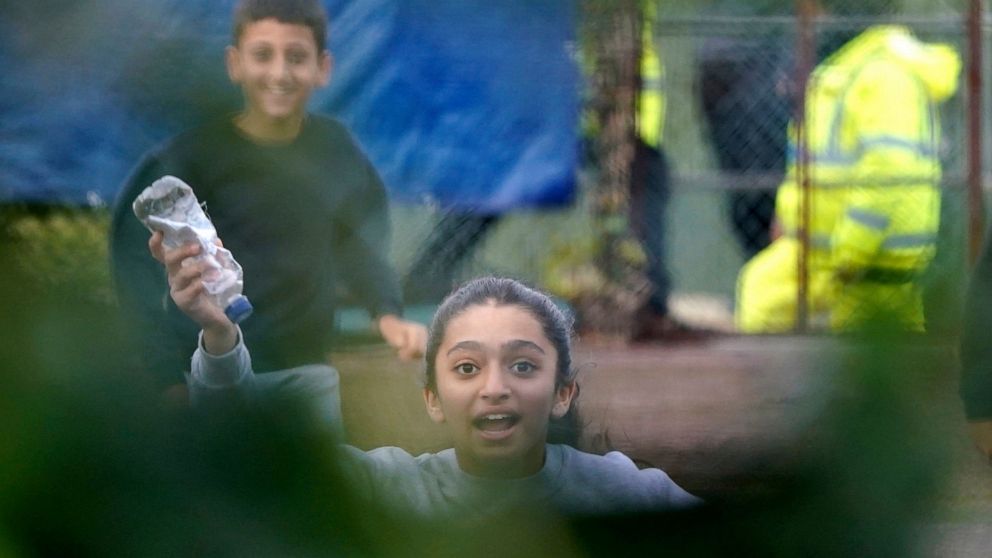 LONDON — Behind wire fences in southeast England, children wave their arms and chant freedom to grab the attention of people on the other side. A young girl throws a bottle with a message inside. We need your help. Please help us, the note reads.

The children are among thousands of people being held in dangerously overcrowded conditions at a closed airport serving as a processing center for migrants who recently arrived on British shores after crossing the English Channel in small boats. The situation there has reignited a heated debate about the Conservative U.K. government’s treatment of asylum-seekers.

Located at the site of a former British air force base that had a short life as the civilian Manston Airport, the center in Kent was designed as a short-term processing facility housing about 1,600 newcomers. Up to 4,000 were staying there at one point this week, with some reportedly detained unlawfully for a month or more.

Independent government inspectors said they saw families sleeping on floors in prison-like conditions that presented fire and health hazards. The inspectors warned of the risk of outbreaks after cases of scabies, diphtheria and other conditions were reported.

Welcome to the U.K, read a headline in the Metro newspaper, accompanied by a close-up photo of young children gazing out from behind metal fences.

Facing pressure over the situation, U.K. Home Secretary Suella Braverman defended the government’s policies and described the increasing number of migrants arriving via the English Channel as an invasion on our southern coast. Her comment drew widespread condemnation.

The conditions at the center in the village of Manston has put a spotlight on wider problems in Britains asylum system, which is struggling to cope with a record number of small boat crossings at a time when border officials are trying to clear a massive backlog of refugee applications.

Weve got this kind of perfect storm of more people coming which the government was warned about and added to the mix we have this huge waiting list of around 100,000 individuals who have sought asylum, said Jonathan Ellis, the policy and public affairs lead at Britains Refugee Council. Theres a lack of political will, a lack of political focus, and therefore, (a lack of) the associated resources to really tackle this issue.

Around 40,000 people from countries that include Iran, Afghanistan, Iraq and Albania have crossed one of the worlds busiest shipping lanes in dinghies and other unseaworthy boats from northern France so far this year, hoping to start new lives in the U.K.

Thats the highest number ever recorded, and it represents an exponential increase from 2018, when only 299 migrants were detected arriving in England in small boats without authorization, official data showed. Last year, there were 28,536.

Dozens of people have lost their lives attempting the passage, including 27 who died when a packed smuggling boat capsized in November 2021.

Braverman, who is known for an uncompromising approach to immigration, has blamed criminal gangs for facilitating the crossings and focused on what she called spurious claims by some of those seeking refuge.

She told lawmakers in Parliament this week to “stop pretending that they are all refugees in distress. Her harsh language has drawn criticism, including from within the governing Conservative Party. Some critics accuse Braverman of fueling anti-immigration hate.

The government rhetoric since I arrived has been scapegoating migrants, blaming us for the problems of this country. But it’s gotten a lot worse,” said Hassan Akkad, a documentary maker who fled Syria in 2012 to seek asylum in the U.K.

When you have a home secretary comparing asylum-seekers to an invading enemy, you are giving a green light to the public to attack them,” added Akkad, who works with refugee charity Choose Love.

The overcrowding at the Manston center reached a breaking point this week after hundreds of people were moved there from another migrant processing center nearby that was hit with gasoline bombs. Police said the man who carried out the Oct. 30 attack and killed himself afterward was likely driven by a hate-filled grievance.

Braverman also faced accusations that she blocked hotel bookings for asylum-seekers to ease overcrowding at Manston and ignored legal advice on the matter. She denied the claims.

Critics say government incompetence in managing Britain’s asylum system extend beyond Manston and precede Braverman becoming interior minister in September. The opposition Labour Party said only 4% of asylum claims from small boat arrivals were processed last year, meaning that more than 100,000 people are in limbo waiting for their applications for protection to be considered.

The U.K. is a preferred destination in Europe for migrants who speak English or have family connections in the country. Before the coronavirus pandemic, many tried to cross from northern France by hiding in freight trucks traveling through the Channel Tunnel. COVID-19 travel restrictions and stricter security measures on the route made the hazardous sea journey a more viable way to enter the U.K.

But despite the unprecedented increase in people arriving in small boats, the U.K. receives far fewer asylum-seekers than many other European countries, including France, Germany and Italy. Last year, 48,540 people applied for British asylum, compared to 148,200 applicants in Germany and more than 103,000 in France.

A controversial deal the U.K. government struck with Rwanda in April added to its reputation of not being the most welcoming. The agreement called for deporting some asylum-seekers to the African country, where their claims would be processed and successful applicants would be allowed to stay in Rwanda. The plan was meant to deter people from entering the U.K. illegally, but no one to date has been deported because of legal challenges to the policy.

U.K. authorities have also sought to work with their French counterparts to stop the Channel crossings. The two sides engaged in tense wrangling over the issue last year, but relations appeared to improve after Liz Truss and her successor Rishi Sunak became prime minister.

In a call with French President Emmanuel Macron last week, Sunak said the U.K. and France were committed to deepening our partnership to deter deadly journeys across the Channel that benefit organized criminals.

Ellis, at the Refugee Council, said authorities ultimately would need to focus less on hostile rhetoric and deterrence and more on safer routes for legitimate asylum seekers to apply for refuge.

We need to challenge this political rhetoric that people should only come to this country through legal routes, he said. Ostensibly thats reasonable, but for someone whos fleeing the Horn of Africa, where are they meant to go? What are those safe routes? There is none.

Sylvie Corbet in Paris contributed to this report.

Kari Lake refuses to say whether she would accept...

YouTube will show personal stories of patients in search...

Daniel Lam on the Markets (Radio)

Ukraine war: ‘I’d rather go to jail than fight...

Inflation pushes more than half of U.S. workers to...

Woman who ran over and killed boyfriend in Fife...

What you need to know about Sam Asghari’s hot-headed...

A Football Hero Takes On Pastor From a Famous...

Distance Wireless Charging Made a Minor Comeback at CES...

A Bear Market in Stocks Is Becoming Entrenched. These...

How the World Is Preparing for the Next Pandemic:...

Facebook Says its Supercomputer Will Help Build Metaverse, be...

Ron DeSantis Heckled by Debate Audience Over Answer About...

The iPhone 14 Pro camera is shaking and rattling...

Damaged your fancy new Mac? Things might not be...

‘After Yang’ explores the meaning of life through a...

NLRB lawyer seeks to toss out company meetings on...

GOP downplays its Trump wing on the world stage

How the US Supreme Court is reshaping America