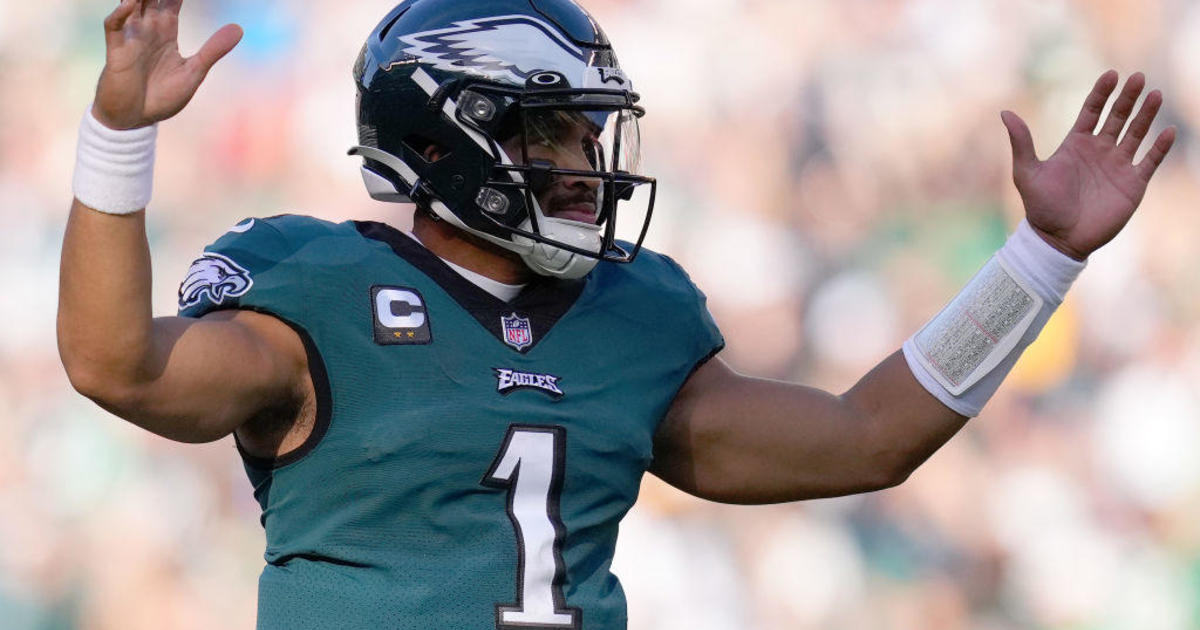 PHILADELPHIA, PENNSYLVANIA – OCTOBER 30: Jalen Hurts #1 of the Philadelphia Eagles reacts after a touchdown in the fourth quarter of a game against the Pittsburgh Steelers at Lincoln Financial Field on October 30, 2022 in Philadelphia, Pennsylvania.

Week 9 of the 2022 NFL season kicks off tonight when the undefeated Philadelphia Eagles face off against the Houston Texans. But don’t look for this football game on network or cable TV.  Because “TNF” is now streaming exclusively on Amazon Prime Video.

Keep reading to find out what you need to know about tonight’s Philadelphia Eagles – Houston Texans game, plus all about Amazon’s best early Black Friday deals.

Top products in this article:

Before you watch tonight’s ‘TNF’ game

While you wait for kick off tonight, we recommend you take a look at Amazon’s early Black Friday sale. There are deals on iRobot Roomba robot vacuum bundles, deals on Fitbit smartwatches, deals on Beats earbuds and more. One especially notable deal for NFL fans: The 2021 Apple TV 4K streaming box is on sale for $100, today only. That’s the lowest price we’ve seen all year.

When does the Philadelphia Eagles – Houston Texans Buccaneers game start?

For the complete 2022 NFL season schedule, check out this guide put together by our sister site CBS Sports.

Where to watch the Philadelphia Eagles – Houston Texans NFL game

If you’re used to casually turning the TV on to catch weekly “TNF” games every season, you should know that the world of NFL streaming has changed this year. After a few years of being available simultaneously on up to three platforms, “Thursday Night Football” will now stream live games exclusively on Amazon Prime Video. You’ll need an Amazon Prime membership or Amazon Prime Video membership to watch.

How to watch ‘Thursday Night Football’ on Amazon Prime Video

Starting with the 2022 NFL season, live “Thursday Night Football” games will stream exclusively on Amazon Prime Video. This marks the first year of an 11-year deal between the NFL and Prime Video, meaning you can catch “TNF” games now through 2033 on the retail giant’s streaming platform.

Play-by-play legend Al Michaels, late of “Sunday Night Football,” and Kirk Herbstreit, best known as an analyst for ESPN’s “College GameDay,” will have the calls. Amazon has updated its X-Ray feature, which enables real-time stats, enhanced replays, trivia, player analysis, polling and merch shopping while you stream the games.

A subscription to Amazon Prime typically costs $15 monthly or $140 annually. Eligible students, EBT, Medicaid and other select recipients of government assistance can score a 50% discount on the service.

If you’re only interested in Prime Video and want to pass on the rest of Amazon Prime’s benefits, you can also subscribe solely to Amazon Prime Video’s streaming library for $8 per month. Not ready to commit to a new subscription? Amazon offers new subscribers a 30-day free trial, so you can watch live NFL action all month long, plus check out other TV shows and movies offered by Prime Video.

If you want to watch NFL games exclusively on your mobile device or tablet, NFL+ has you covered. Starting at $5 per month or $30 annually, an NFL+ subscription gives you mobile or tablet access to live local and primetime regular season and postseason games, live game audio for every game and more. You’ll also get live out-of-market preseason games across a broader range of devices.

The best TVs for watching football in 2022

We’ve found the best TVs for watching NFL football (based on user reviews) including TV from top brands such as Samsung, LG, and Sony. Keep reading to see the best deals on the best TVs you can get for the 2022 NFL season.

Here’s a great deal to get you started: This 55-inch Samsung QLED is on sale at Samsung for $200 off.

No matter what stream of the game you’re watching, this QLED TV lets you watch the game in upscaled 4K resolution thanks to its machine-based learning AI. The smart TV also features apps, streaming services and advanced controls. Plus, it’s compatible with most voice assistants.

Transform your TV into a piece of art when you’re not watching football. The Frame smart TV has a built-in motion sensor that activates your device to display your favorite pieces of art in 4K resolution whenever you enter the room. No matter if you’re admiring Hopper’s “Early Sunday Morning” or jamming along to Carrie Underwood’s Sunday night football intro, this QLED TV produces 100% color volume in the DCI-P3 color space, which is the format for most cinema screens and HDR movies for television. (Translation: Colors on this TV will be more vivid and true-to-life.)

Watch NFL stars battle it out in gorgeous color and luminosity with this 75-inch Samsung 4K TV. The TV features low lag rates and minimized blur, so you’ll always be able to keep up with the plays. The 4K smart device also provides tailored recommendations for streaming and live TV with an on-screen guide.

Your TV should sound like you’re in the stadium. The Samsung 4K Neo QLED includes top-of-the-line features, including a premium audio technology called object-tracking sound (OTS). With OTS, your television analyzes the action on screen and tries to replicate a surround-sound experience without any external speakers. The Samsung 4K Neo QLED also features a built-in Alexa assistant.

The 65-inch Sony Bravia XR OLED 4K TV features a cognitive processor meant to deliver intense contrast with pure blacks, high peak brightness and natural colors. Thanks to its Acoustic Surface Audio+ technology, the screen is the speaker. This smart TV comes with access to Google TV, and works with most voice assistants.

This 75-inch Amazon Fire TV offers a 4K UHD display and enhanced color and clarity thanks to Dolby Vision. The TV also supports voice control with Amazon Alexa. It’s high-quality picture quality and large size make this TV a solid choice for football fans — plus it’s hard to find such a big screen at such a low price.

This 65-inch Samsung QLED TV features 8K resolution, Quantum Matrix Technology Pro for a colorful and luminous picture, and an anti-reflection layer that minimizes glare and reduces unwanted distractions. While the NFL games won’t be broadcast in 8K this season, owning this TV will make sure you’ll be able to catch the first 8K NFL broadcast, whenever it happens. (It will use its AI smarts to upscale NFL games to 8K, however.)

At just 32 inches, this budget-friendly Toshiba TV is suited for small spaces like bedrooms or offices. It runs Amazon’s Fire TV platform, so you can stream new shows from Hulu, Netflix and more without plugging in extra equipment. You can also watch live TV on this device.

A mid-size television, 55 to 65 inches along the diagonal, is the ideal size for many living rooms. The best viewing distance for a 55-inch 4K TV, such as this model, is between 4.5 and 7 feet. That leaves enough space for people to get up and walk by for more snacks from the gameday spread.

Buying your first TV so you can watch the Super Bowl on a big screen? If you’re already used to a certain interface, switching can be tough, especially if you’re not particularly tech savvy. Fans of the super-simple Roku platform should look for a TV — like this TCL model — with a built-in Roku system. Plus, the picture quality of this 6-Series model is stunning for the money.

Roku devices, Amazon Fire Sticks and more ways to stream the 2022 NFL season, plus tons of great shows and movies.

Among the streaming hardware giants, the Roku Express 4K+ boasts the most options and apps, including NFL-friendly streaming services such as Hulu, YouTubeTV and FuboTV. It’s Apple AirPlay compatible as well, enabling you to connect your iPhone or iPad to the TV. (You can learn more about Roku here.)

Apple devotees, or anyone with an Apple One subscription bundle, should consider watching NFL live streams on an Apple TV 4K. The device is equipped with Dolby Vision, a new-and-improved Siri-enabled remote and SharePlay, which enables you to enjoy the game with a group of pals. After the games wrap, you can take advantage of Apple Arcade gaming or stream a movie from your favorite streaming service.

Amazon’s Fire TV Stick 4K is a streaming device that will appeal to anyone with an Alexa-enabled home. Say goodbye to pouring through channel menus. You can switch back and forth between games with the device’s voice remote (“Alexa, turn on the AFC Championship…”). It offers 4K Ultra HD, Dolby Vision, HDR, and HDR10+ in addition to Dolby Atmos audio, plus access to thousands of channels, some of which are free.

U Must Have amplified HD digital TV antenna

U Must Have via Amazon

If you want to catch NFL games without paying for a cable or streaming subscription, an indoor HD digital TV antenna is the way to go. For just $29, it’ll deliver any live-aired, free-TV NFL games in your area, plus all the other over-the-air content available in your area. Just connect the antenna to your set, and watch. It’s the 20th century TV-viewing experience with 21st century technology.

U Must Have amplified HD digital TV antenna, $29

Amazon union rerun election in Alabama will be determined...

Dolphins elevate OL and RB ahead of wild-card game

Backed by the National Institute on Aging, the a2...

Fear of flare-up after deadly Israeli raid in Jenin

How to Install the Google Play Store on an...

WHO “not concerned” about monkeypox becoming pandemic

Blue Öyster Cult, ‘Workshop of the Telescopes’: The Week...

Sherrock beaten in first round of Worlds by Evans

Unlocking the Value in NFTs

The Memo: GOP tussles with Biden as gas prices...

Buffalo supermarket mass shooting: What we know about the...

Free-range eggs no longer available in UK due to...

Carolyn Hax: Is it ever okay to return an...

The changing cloud landscape: From observability to optimization

MoneyWatch: The Uncertain Economy: How to stretch your dollar...

Ending Asian Hate Begins With Each of Us |...

POLITICO Playbook: Behind the scenes as Hill leaders saved...

Going to the World Cup? Get ready to have...

Why was ASAP Rocky arrested in Sweden? Breaking down...