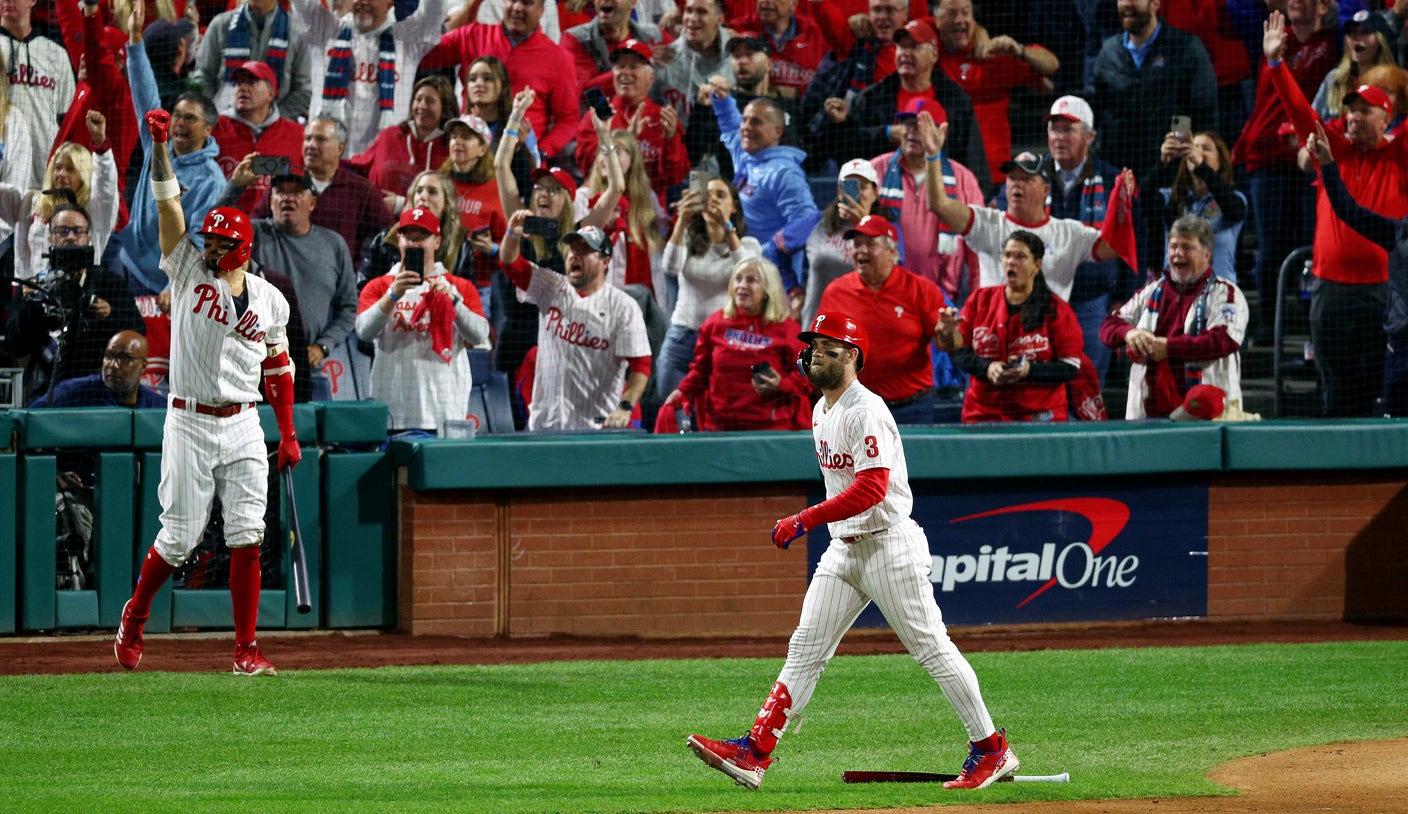 The last pitch Bryce Harper saw at Citizens Bank Park sent his team to the World Series. Eight days later, the next pitch thrown to the National League Championship Series MVP at his home ballpark put the Philadelphia Phillies in the drivers seat of the Fall Classic.

After sending Padres reliever Robert Suarezs 98.9 mph sinker out the other way

for a 382-foot home run in the eighth inning of Game 5 of the NLCS, Harper started Game 3 of the World Series on Tuesday night by turning on an 84.6 mph curveball

from Astros starter Lance McCullers Jr. for a two-run home run. It was the first time since Chase Utley in the 2009 World Series that a Phillies player homered on two straight pitches at his home ballpark in the postseason.

Harpers two swings, just over a week apart, each put the Phillies ahead the first finishing off the San Diego Padres, the latter starting a barrage against the Astros and moving Philadelphia two wins away from a World Series championship.

“Just walking into the ballpark, just being back home, I think is such a momentum swing for us, just for the pure fact of our fanbase,” Harper said. “We all come in here, and were ready to go, and were excited to get on the field because we know theyre going to show up and theres going to be 46,000 people here screaming and yelling and going crazy.”

More often than not, it has been Harpers swings causing the commotion.

Harper is hitting .382/.414/.818 with six home runs, six doubles and 13 RBIs through 14 extraordinary playoff games. He is leading all players this postseason with a franchise-record 21 hits seven more than the next closest player, Houstons Yuli Gurriel. He has also barreled four more baseballs than any player this postseason.

Beyond his own franchise marks, Harpers postseason has been historic in a grander context. Harper, Albert Pujols (2004) and Carlos Beltrán (2004) are the only players to mash six homers with a batting average of at least .380 and an OPS over 1.200 in a single postseason.

Of Harpers six homers one shy of Jayson Werths Philadelphia record set in 2009 four have been go-ahead shots, trailing only Pujols mark of five set in 2004 with the St. Louis Cardinals for the most in a single postseason.

“It gets the offense going, energizes the whole building,” Alec Bohm, who also homered Tuesday, said after a Game 3 win that helped the Phillies move to 6-0 at Citizens Bank Park this postseason.

That building is hosting November baseball against all odds.

The Phillies were the last of the 12 teams in this years playoff field to cement a postseason berth. They possessed the pieces to mash, but those pieces were largely unwhole. Health had not been on Harpers side all year.

, Harper underwent thumb surgery in June. He didnt resemble his typical self upon his return on Aug. 26, posting a .676 OPS in the seasons second half and slashing .197/.268/.282 with one home run in his last 19 games before the playoffs.

“He got off to a little bit of a slow start because he was off for so long and his timing wasnt right,” manager Rob Thomson said. “That takes some time. But since the postseason started, hes been on fire.”

With the pressure at its peak, Harper is persevering through any potential lingering pain and etching himself into the postseason record books.

Harper is the only player in playoff history to record at least 20 hits, six home runs and six doubles in a single postseason. He is two extra-base hits shy of tying the playoff record of 14 shared by Randy Arozarena (Tampa Bay, 2020) and David Freese (St. Louis, 2011). Arozarena played in six more playoff games that year than Harper has, while Freese played in four more.

Among players with at least 50 at-bats in a single postseason, only Arozarena who mashed 10 home runs in 20 games in his ridiculous 2020 postseason has recorded a higher slugging percentage (.831) than Harper (.818).

Harper is doing much of his damage against fastballs, hitting .438 against the pitch. He has homered off a Suarez sinker, a Kenley Jansen cutter and fastballs from Yu Darvish and Dylan Lee. But throwing him junk isnt a remedy. Harper is also hitting .375 against curveballs and has homered on breaking pitches from McCullers and Miles Mikolas.

“I told myself before the at-bat, Dont let him beat you here,” McCullers said after serving up the Game 3 homer to Harper on the first pitch of his at-bat. “But it was not a well-located pitch. It couldve been a well-located pitch, and he couldve done the exact same thing.”

The only pitch Harper has struggled to do much damage against this postseason is the slider (1-for-8, .175 wOBA), but he hit .317 against sliders during the regular season. Perhaps more remarkable and a demonstration of how locked in he is his six home runs have come in five different zones of the plate. He has homered in all three outside quadrants, twice on pitches in the middle of the plate and on a breaking ball low and in.

Any pitch thrown in the zone could add to whats already been one of the all-time great postseason performances.

“Im just so focused on winning,” Harper said. “Im not focused on anything else besides that.”

US fugitive detained over aggression to Glasgow NHS staff

Could an October Surprise Change the Course of Midterms?

OQ creating a more sustainable future for Oman and...

Cowboys’ Jerry Jones is taking a bow, and this...

Amore’s in for auditor

Fact Check-Video of fire at Majuba Power Station is...

As Musk buyout looms, Twitter searches for its soul

North Korea accuses US of creating ‘Asia-Style NATO’ to...

Michigan is becoming the center of US battery manufacturing

New Nothing wireless earbuds leak, with an intriguing name

Japan votes for key election in shadow of Abe...

‘My Work as a Journalist Is to Help’

Musk’s toughest troll fight on Twitter is with a...

Virginia officials defend respond to snowy gridlock on I-95

How young voters saved the Democrats in 2022

Next Africa: Russian Help May Come at a High...

Why the number of US mass shootings has risen...

‘She’s a Human Being Who Was Killed in Cold...

Celebrity birthdays for the week of Sept. 25-30

Activision’s Overwatch 2 Is Redefining the Sequel

UK Stumbles in First Step of Space Race: The...

How to qualify for $13 billion aimed at cutting energy costs