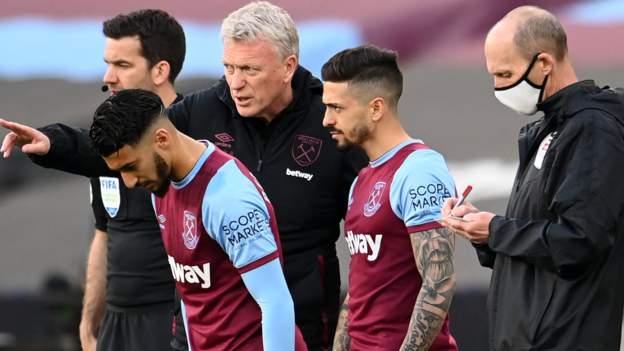 Since the start of the 2020-21 season, the Premier League has reverted to a maximum of three substitutions

Football law makers, the International Football Association Board (Ifab), have recommended five substitutions are implemented permanently in the sport.

The rule was first introduced in May 2020 – a month before football restarted after being paused because of the Covid-19 pandemic.

The Premier League voted against its continuation in the 2020-21 season.

Individual football leagues and competitions will be able to decide whether or not to implement the rules.

In a statement, Ifab said: “FAP-TAP today recommended that competitions should be able to decide on increasing the number of substitutes according to the needs of their football environment, while the current number of substitution opportunities (three plus half-time) should stay the same.”

The law makers said it follows “a number of requests from confederations, associations, leagues and other key stakeholders for this option to be introduced permanently”.

Many Premier League sides are believed to have felt having five subs would unfairly benefit major clubs with stronger squads.

However, some leading managers, including Liverpool’s Jurgen Klopp and Manchester City’s Pep Guardiola, have previously said the limit on changes has contributed to injury problems. Daimler Showcases the Truckmaking Behemoth It Will Soon Spin...

Ed Gainey will become the city’s first Black chief executive if he wins the general election in November.
Read more

Pebble has announced a new watch on Kickstarter and raised millions of dollars within just a few hours. CNET's Jeff Bakalar joins CBSN with what makes this watch so unique.
Read more

15 of the most beautiful small towns in Europe, from Italy to Spain and France.
Read more

‘Together We Are Magia’ … at Walt Disney World...

I’m very proud to be a Hispanic/Latinx cast member at Walt Disney World Resort and that’s one of the reasons why I’m always excited to share the different events and opportunities we have to celebrate our cultures with all of you. As part of Hispanic Latinx H…
Read more

They told the victim they were investigating a fraud in China and needed her to transfer her funds.
Read more

DeChambeau plans to ‘unleash the beast’ in effort to...

The sentencing followed pleas from members of Floyd’s family to give Chauvin the “maximum penalty.”
Read more

Milva, one of Italy's most popular singers in the ‘60s and ’70s who also had many fans abroad, has died at her home in Milan
Read more

Optimism on police reform in the Capitol collides with...

As President Joe Biden looks to build momentum for police reform in his address to a joint session of Congress this week, there is some optimism in Washington about the potential for a bipartisan compromise that would finally create movement on the issue. But…
Read more

House Speaker Nancy Pelosi, D-Calif., has served in Congress for nearly 34 years and presently presides in a top-tier position as one of the most powerful figures in the U.S. government. Amid a recent flurry of complicated decisions she's had to face as leade…
Read more

Pulse Secure says it has fixed VPN issue that...

Netflix’s Army of the Dead prequel gets a teaser...

Netflix has dropped the first trailer for Army of Thieves, which shows what Dieter was up to before the zombie outbreak.
Read more

The Missouri House Ethics Committee on Monday recommended that state Rep. Rick Roeber (R) be expelled, after it released a ...
Read more

Sunrise, Fla. (AP) -- Joel Quenneville resigned as coach of the Florida Panthers on Thursday, two days after the second-winningest coach in NHL history was among those implicated for not swiftly responding to allegations by a Chicago Blackhawks player of bein…
Read more

These are the pockets of the US most at...

The Delta variant, a strain of Covid-19 believed to be more transmissible and dangerous than others, is likely to break out in some US communities, a health expert told CBS's Face the Nation.
Read more

People should still "get the jab", the health secretary says, after some countries suspend its use.
Read more

How A Song Becomes A Queer Anthem, According To...

Tracks celebrating queer experiences have become mainstream, but music by and for the community has always existed. Big Freedia, Tayla Parx, and Justin Tranter explain what makes a song a queer anthem.
Read more

How Avaya Spaces can make your daily workload a...

From 1,000-person presentations to managing projects and tasks, Avaya Spaces is here to change the way you work.
Read more

Sydney reported its worst day of the Covid-19 pandemic on Thursday with five deaths and a record rise in locally acquired infections as a weeks-long hard lockdown is struggling to contain the highly contagious Delta strain of the coronavirus.
Read more

The Biden administration is about to face a grilling from high-ranking Democrats in both the House and Senate over the bungled U.S. exit from Afghanistan, where the Taliban's quick advances caught key officials off ...
Read more

Match of the Day: Alex Oxlade-Chamberlain ‘key’ to Liverpool’s...

Match of the Day pundits Steven Warnock and Leon Osman discuss how Alex Oxlade-Chamberlain played a key tactical role in Liverpool's 3-1 win over Newcastle in the Premier League.
Read more

The Department of Justice (DOJ) announced on Thursday that six members of the Three Percenters right-wing militia group have been charged with conspiring to attack the U.S. Capitol on Jan. 6.All six men - Alan Host...
Read more

The federal government agency responsible for leading investigations into building failures is sending a group of scientists and engineers to collect information on the Miami-area building collapse to determine whet...
Read more

Google cracks down on financial-scam adverts

OnePlus 9T is canceled, and OnePlus 10 will feature...

The World Health Organization (WHO) reported Tuesday that new coronavirus infections rose globally by more than half this past week. In ...
Read more

Amazon has launched a new technology that the company says will enhance the performance of some of its internet-connected devices. But Amazon Sidewalk also uses the Wi-Fi within millions of American homes, and that has some privacy advocates concerned. CBS Ne…
Read more

The opponent of President Vladimir Putin complained about prison authorities’ refusal to give him the right medicines and to allow his doctor to visit him behind bars.
Read more

Chicago officer on desk duty after struggle with Black...

From Washington: The Implications Of Rising Inflation

New data this week showed the Consumer Price Index (CPI) had gone up 6.2% in October, from a year ago, becoming the biggest inflation surge in more than 30 years. The White House is insisting that the infrastructure bill that recently passed in Congress and t…
Read more

The Xiaomi Mi 11 Lite 4G will come to India on June 22 as one of the thinnest and lightest smartphones of the year.
Read more

Harris, under GOP pressure to visit border, headed to...

Fox News host Tucker Carlson sharply criticized the chairman of the Joint Chiefs of Staff on Thursday, calling him a "pig" and "stupid" and saying he got his job because he was obsequious and told his superiors what...
Read more

Over Black Friday, the LG A1 is the best way to get a cheap OLED in your home.
Read more

Apple has delayed a big feature for its major software updates this year, confirming it will arrive later.
Read more

Claire Thomas says she couldn't help people in Iraq and Afghanistan, but she could tell their stories.
Read more

What Melania Trump must prove in Daily Mail defamation...

This Prime Day power bank deal is great if...

A 20,000mAh Anker power bank is 30% off in the Prime Day sales, perfect for if you've bought a new gadget in the sales.
Read more

"The demand is growing in particular at the moment, the price is rising quite sharply." From planting thousands of trees to changing cattle grazing methods, carbon farming is on the increase in Australia as the market for carbon credits grows https://bloom.b…
Read more

Prince Philip would relax and be treated the same as everyone else, a fellow driver says.
Read more

Hibernian lodge an appeal against the red card shown to Ryan Porteous in Sunday's defeat by Rangers.
Read more

Prime Minister Boris Johnson is expected to set out details of Britain’s final military withdrawal from Afghanistan almost 20 years after the U.K. and other Western countries began their deployment
Read more

A children's book checked out from the Boise, Idaho, public library in 1910 vanished for 111 years only to be returned anonymously, library officials said.
Read more

The findings come as the Biden administration is firming up plans to roll out booster shots to adults in late September.
Read more

Harley-Davidson Inc. hinted at a new plug-in motorcycle as part of its launch of a stand-alone electric brand.
Read more

US to reimpose sanctions on Belarus after forced landing...

The film business is inherently full of starts and stops, but few have experienced the phrase “hurry up and wait” quite like “No Time to Die” director Cary Fukunaga
Read more

‘An outrage against democracy’: JFK’s nephews urge Biden to...

The president once more pushed back the scheduled release. But after 58 years, family members say the secrecy needs to end.
Read more

Five cases of omicron were confirmed in South Korea on Wednesday, making it the latest to join more than 20 countries that have detected the new coronavirus variant.South Korean officials said the cases were linked...
Read more

Next China: TikTok’s OK, for Now

President Joe Biden is beginning to tweak U.S. policy toward China in much more material ways, his decision this week to revoke Trump-era bans of TikTok and WeChat being a notable example. While that might redefine how the relationship moves forward, the ulti…
Read more

Danny Kruger lost control of his 11-month-old Jack Russell during a walk with his family.
Read more

The Scottish SPCA received more than 136,000 calls about unwanted animals in the past year.
Read more

The death toll from Hurricane Ida and its aftermath continues to rise with two bodies found in the Passaic River in New Jersey.
Read more

Namibia edge home in final over against Scotland