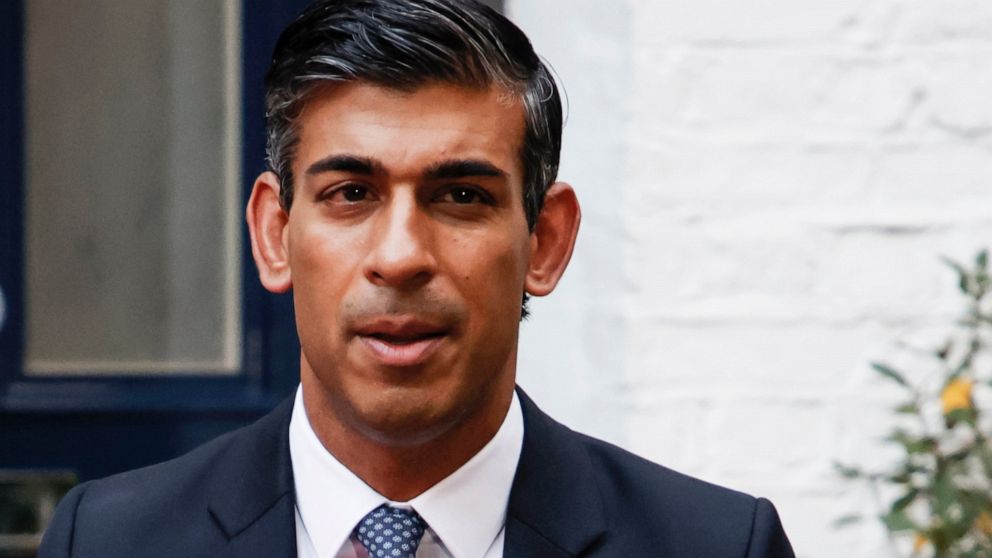 LONDON — Former Treasury chief Rishi Sunak is strong favorite to become Britains next prime minister within days or even hours after former leader Boris Johnson dropped out of the Conservative Party leadership contest.

After the resignation of Liz Truss last week, the governing party is choosing Britains third prime minister this year at a time of political turmoil and severe economic challenges.

Sunak, 42, is the only candidate with confirmed support from more than 100 lawmakers, the number needed to run in the election. House of Commons Leader Penny Mordaunt has far fewer expressions of support, but is aiming to reach the threshold by the time nominations close at 2 p.m.

If Mordaunt does not reach 100 nominations, Sunak will win by acclamation and could move into 10 Downing St. by Monday evening.

If both make the ballot, the 357 Conservative lawmakers will hold an indicative vote on Monday to show their preference. If neither subsequently drops out, the choice will go to the 172,000 party members around the country, with a result announced Friday.

Mordaunt will come under intense pressure to step aside and not force a membership vote if Sunak is the strong favorite among lawmakers.

Home Secretary Grant Shapps, a Sunak supporter, said the former Treasury chief did not think he had the contest in the bag.

Hes speaking to colleagues this morning, hes working very hard to attract those supporters who were perhaps with Boris Johnson previously, Shapps said. But, look, Ill leave it to Penny, shes a terrific colleague. Lets see what happens.

Sunak, who was runner-up to Truss in this summers Tory leadership race to replace Johnson, has promised integrity, professionalism and accountability if he forms a government a contrast to the chaos that consumed the past two prime ministers.

Johnson dramatically quit the race on Sunday night, ending a short-lived, high-profile attempt to return to the prime ministers job he was ousted from little more than three months ago amid ethics scandals.

Johnson spent the weekend trying to gain support from fellow Conservative lawmakers after flying back from a Caribbean vacation. Late Sunday he said he had amassed the backing of 102 colleagues. But he was far behind Sunak in support, and said he had concluded that you cant govern effectively unless you have a united party in Parliament.

The prospect of a return by Johnson had thrown the already divided Conservative Party into further turmoil. He led the party to a thumping election victory in 2019, but his premiership was clouded by scandals over money and ethics that eventually became too much for the party to bear.

In his Sunday statement, Johnson insisted he was well placed to deliver a Conservative victory in the next national election, due by 2024. And he said that he likely would have won a ballot of Conservative Party members against either of his rivals.

But in the course of the last days I have sadly come to the conclusion that this would simply not be the right thing to do, he said.

He hinted he might be back, however, saying: I believe I have much to offer but I am afraid that this is simply not the right time.

Truss quit Thursday after a turbulent 45 days in office, conceding that she could not deliver on her botched tax-cutting economic package, which she was forced to abandon after it sparked fury within her party and weeks of turmoil in financial markets.

Sunak, who was Treasury chief from 2020 until this summer, steered Britains slumping economy through the coronavirus pandemic. He quit in July in protest at Johnsons leadership.

The Conservative Party turmoil is fueling demands for a national election. Under Britains parliamentary system, there does not need to be one until the end of 2024, though the government has the power to call one sooner.

Currently that looks unlikely. Opinion polls say an election would spell disaster for the Conservatives, with the left-of-center Labour Party winning a large majority.

Follow all AP’s reporting on British politics at https://apnews.com/hub/british-politics Philippines says ‘indispensable’ Suu Kyi must be involved in...

Even if the iPhone 14 is the most powerful...

Why your website is about to get more expensive

My favorite Bose Bluetooth speaker is now cheaper than...

Mailchimp says an internal tool was used to breach...

Top movies and shows coming to Disney Plus in...

Apple Music Users Lament Being Left Out of Instafest...

Adidas to launch investigation into allegations of inappropriate behavior...

‘Resident Evil’ evolves the game/movie franchise into a generic...

Internet in Stitches After Woman Tries Eyebrow Stencil on...

Queen Elizabeth says she wants Camilla to be named...

Saudi, UAE back OPEC cuts as US envoy warns...

Women of Steel: Meet the England players ready to take on the...