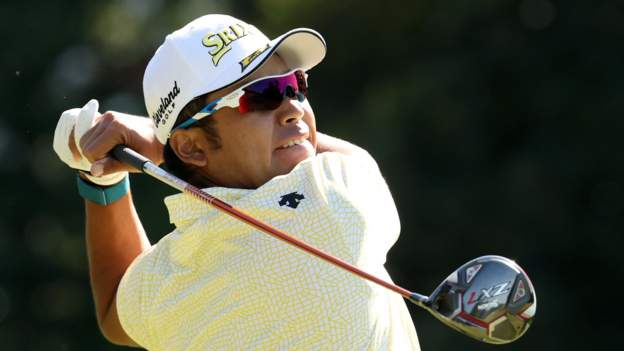 Masters champion Hideki Matsuyama shot a final-round 65 to win the Zozo Championship in his native Japan.

Matsuyama, who made an eagle on the 18th, finished on 15 under par in Chiba to win the tournament by five shots.

Americans Brendan Steele (66) and Cameron Tringale (69) were joint second on 10 under.

“It’s just so great to play in front of so many fans here in Japan and to be able to play well,” said 29-year-old Matsuyama.

England’s Matt Wallace was joint fourth as he carded a final-round 70 to finish on six under, with compatriot Tommy Fleetwood (70) one shot further back.

The tournament returned to Japan this year, after being moved to California in 2020 because of the coronavirus pandemic, with the gallery restricted to 5,000 fans.

Tringale took the lead after a birdie on the 10th but did not make a birdie after that, while he bogeyed the 17th and 18th.

Matsuyama, on the other hand, produced three birdies on the back nine, along with his eagle, to secure the win. JPMorgan Back in Warren’s Crosshairs for Overdraft Fees

Covid in Scotland: Over-40s turned away for vaccine boosters

Bill that would mandate Asian-American history lessons in Illinois...

A bill that would require Asian American history lessons be taught in Illinois schools cleared the final hurdle in the state legislature on Monday, and will now head to the governor's desk for signature....
Read more

Crime drops by 8% during year of lockdowns, says...

A 26% fall in theft offences drove a reduction in crime recorded by police in England and Wales.
Read more

Pelosi ‘deeply concerned’ for women amid Taliban gains in...

House Speaker Nancy Pelosi (D-Calif.) on Saturday voiced her concern for women and girls in Afghanistan as the Taliban closes in on control of the country. In a statement releaed Saturday evening, Pelo...
Read more

Shares in Morrisons (MRW.L) opened up 30% on Monday on hopes private equity firm Clayton, Dubilier & Rice (CD&R) might raise its proposed offer for the British supermarket group or flush out interest from other possible suitors.
Read more

Dissident journalists Maria Ressa and Dmitry Muratov won the Nobel Peace Prize on Friday for their efforts to safeguard freedom of expression in the Philippines and Russia.
Read more

Angry residents have made headlines with their protests against controversial government proposals.
Read more

Republicans can save trillions while approving infrastructure package

Pruning the jungle of red tape never works because the underlying premise is to avoid human judgment on the spot. The only solution is to replace the jungle with a simpler framework activated by human responsibility and accountability.
Read more

Opinion | The Neglected Agency at the Center of...

If the U.S. is serious about countering China, it should acknowledge the Commerce Department’s growing importance — and provide the money, talent and authorities to let the agency do its job.
Read more

President Joe Biden sought to hold together a $579 billion bipartisan infrastructure agreement, saying he hadn’t intended to issue a veto threat by linking it to another spending bill, a position that alarmed Republican senators who had made the deal.
Read more

A psychologist says she was "very worried" about Usman Khan before he was released from jail.
Read more

Published by Reuters By Daniel Trotta (Reuters) – The Texas House of Representatives passed a bill that bans transgender women and girls from participating in school sports after three previous attempts failed, all but assuring Republican Governor Greg Abbott…
Read more

Hungary fans are banned from attending their final World Cup qualifier in Poland after clashing with police during October's draw with England at Wembley.
Read more

Derek Chauvin to be sentenced for George Floyd’s murder

Former Minneapolis Police officer Derek Chauvin will be sentenced today in the 2020 murder of George Floyd. Follow here for the latest inside the courtroom.
Read more

Lionel Messi scores a free-kick and sets up two goals to inspire Argentina to a 3-0 win over Ecuador and set up a Copa America semi-final against Colombia.
Read more

Top lawmakers to get security briefing ahead of far-right...

The U.S. Capitol Police chief is briefing House and Senate leaders today, ahead of a rally planned for Saturday by far-right groups who say they want "justice" for people charged in connection with the January 6 Capitol riot. CBS News congressional correspond…
Read more

This phishing kit is wreaking havoc on thousands of...

The week in 40 photos

Manchin comes face to face with his critics

US journalist sentenced to 11 years in Myanmar court

U.S. journalist Danny Fenster was sentenced by a court in Myanmar on Friday to 11 years in prison with hard labor after he was found guilty on several charges, including spreading false information.Fenster, the man...
Read more

It doesn’t have to cost a fortune and is a lot easier than you think.
Read more

Smart robots do all the work at Nissan’s ‘intelligent’...

The former BBC director during the 1995 bombshell interview of the late Princess Diana resigned from his current job after an investigation found a BBC journalist used deceitful methods to get an interview with the princess.
Read more

Republicans plotting to maximize their advantages in state legislatures across the country during the decennial redistricting process are considering cracking apart Tennessee's largest city, an ambitious move that could s...
Read more

Saroj Lal: Legacy of teacher who was race relations...

Awards are set up to honour Saroj Lal one of the first Asian women to teach in a Scottish primary school.
Read more

U.S. officials have portrayed the program as a safe and legal alternative to the often dangerous trek migrant children undertake to reach the southern border.
Read more

Lured south by sunshine, golf, and money, the former president’s allies and hangers-on have formed an alternate universe that revolves around Mar-a-Lago.
Read more

In his State of the Union address, President Obama called on Congress to set its sights higher than the Keystone XL pipeline, in favor of an broad infrastructure plan that would create more jobs.
Read more

Microsoft CEO Satya Nadella has sold half of his shares in the tech giant, ...
Read more

Carphone Warehouse is leading the market for Google Pixel...

Valve is having another go at making Linux gaming great, this time with support from NVIDIA.
Read more

Originally coming out in May, Apple has delayed the launch of Podcast Subscriptions until June to make last-minute tweaks and changes to the service.
Read more

Compared with the start of last year, Scotland's GDP was down by 5.4% - less than the UK decline of 6.1%.
Read more

PUBG Mobile India deletes most of its posts on...

PUBG Mobile India launch has taken an interesting turn as the game just purged almost all of its post across all platforms.
Read more

The Georgia state Senate voted along party lines on Monday to repeal no-excuse absentee voting after the state sent to Democrats to the Senate and voted for a Democratic presidential nominee for the first time in de...
Read more

Boston’s JD Martinez sprains ankle by stumbling over base

Boston Red Sox slugger J.D. Martinez is not all that used to playing defense. He is, after all, usually a designated hitter.
Read more

Asian shares pull back, chilled by decline on Wall...

Vulnerability was rated critical since it could be exploited remotely by anyone.
Read more

New York Gov. Andrew Cuomo (D) on Saturday warned New Yorkers who live in flood areas to get to higher ground before Hurricane Henri hits the state."If you know you are in an area that tends to f...
Read more

Meghan McCain hits back at critics of comments decrying...

"The View" co-host Meghan McCain is hitting back at critic...
Read more

Australia’s Brisbane to Enter 3-Day Lockdown Due to Outbreak

Brisbane, Australia’s third most-populous city, will enter a three-day lockdown from 5 p.m. local time Monday due to an outbreak of the U.K. strain of the coronavirus.
Read more

"We have inherited a garden; we must not leave a desert to our children," the joint appeal said.
Read more

How to watch Game of Thrones in Australia: stream...

Watch every episode of Game of Thrones online in Australia. Catch up with season 8 and everything else now that it's all live.
Read more

Valve believes that the Steam Deck will "perform really well" and has "done a ton of testing on reliability".
Read more

Who is Gyovanny Arzuaga? Chicago Man Executed by Gunmen...

The graphic video purports to show Arzuaga, 24, dragged out of his vehicle and fatally shot by gunmen, who remain at large.
Read more

Season 2 of Netflix’s Locke and Key gets an official release date – narrowed down to a month, anyway.
Read more

A swathe of leaked images as well as a potential reveal date have been uncovered for Sony's next true wireless ANC marvel.
Read more

CDC says no cases of Omicron identified in U.S....

No cases of new COVID-19 variant detected in South Africa have been identified in the United States to date, the U.S. Centers for Disease Control and Prevention said on Friday.
Read more

The Latest: Taiwan says 11 arrested at its Haiti...

Europe lines up more shots, hoping to beat back...

Singapore’s High Court has halted the imminent execution of a Malaysian man believed to have a mental disability, amid pleas from the international community and rights groups
Read more

To safely attach your new AirTags to your most valuable items, you'll need one of these useful accessories.
Read more

A CIA officer who was traveling with agency director William Burns to India this month reported symptoms consistent with Havana syndrome, CNN and the New York Times reported on Monday.
Read more

What families are fearful and excited for this school...

Parents, children and many experts are concerned about children returning to school at this point of the pandemic. A new poll adds to the data backing up those anecdotes.
Read more

David Rudd sent an email to the Mayor of Market Weighton asking if he had Nazi ancestors.
Read more

All the New Privacy Features Coming to iOS and...

Improvements designed to keep your email private, crack down on data stealing apps, and help you find lost devices are on their way.
Read more

The British and Irish Lions complete their Test series preparations with a comfortable win against the Stormers.
Read more

Wooden barracks at the death camp were spray-painted with English and German phrases.
Read more

As the nation continues to move toward a return to normal, CNN will celebrate the reopening of the country with a special, live July 4th prime-time program featuring fireworks displays from coast-to-coast and musical performances celebrating the United States…
Read more