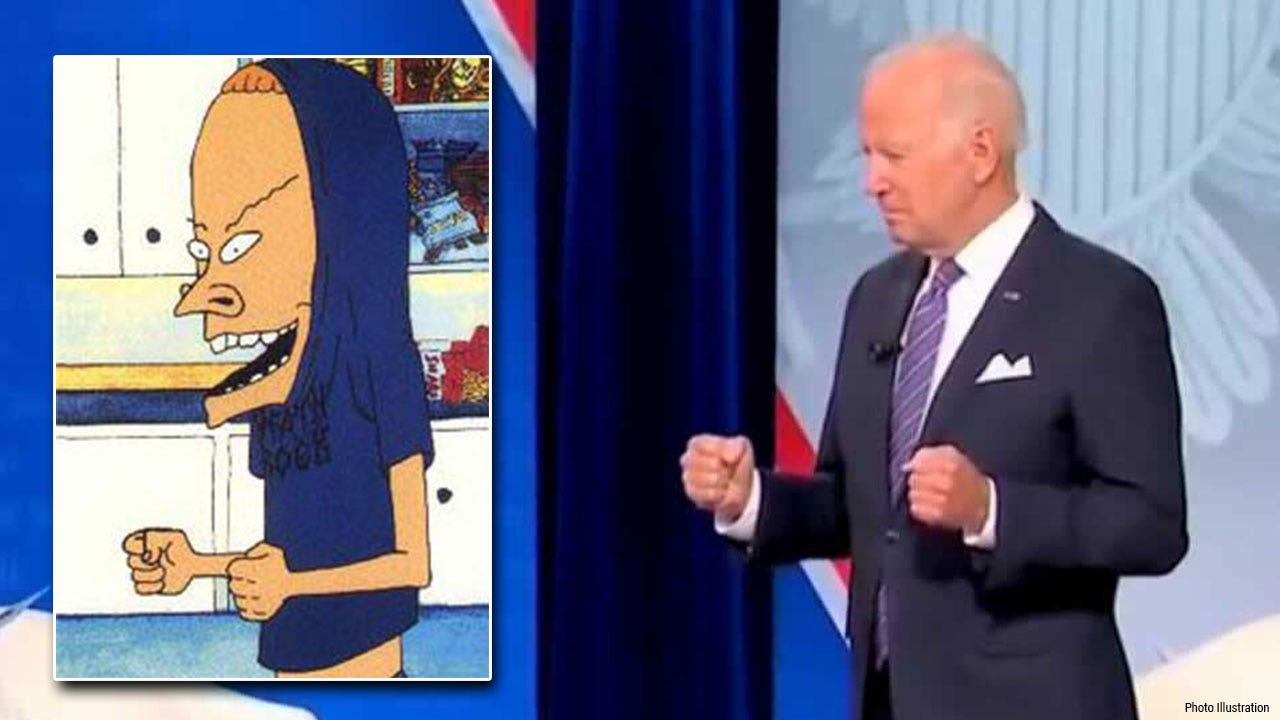 Social media users took to the internet following President Biden’s recent town hall, drawing comparisons between his behavior and that of the cartoon character Beavis from “Beavis and Butt-head”

At one point during the town hall, Biden was shown holding his arms bent out in front of him with his fists clinched.

That moment was clipped and shared to social media by several people, including political commentator Mike Cernovich, who questioned, “What is Biden doing?”

Other users simply shared photos of the president in the moment alongside pictures of Beavis, who is known for a hyperactive alter-ego, The Great Cornholio, that exhibits the same behavior.

One user said Biden looked like he was “about to transform into cornholio,” including a GIF of Beavis. Another user noted Biden was “pretty good” at impersonating Beavis.

“Who did Cornholio better,” questioned one user.

“I’m not much of a conspiracy theorist… but has anyone ever seen Biden and Beavis in the same room,” another user asked rhetorically.

Following the town hall the word “Cornholio” shortly became a trending topic on Twitter as people compared Biden to the cartoon character. Realme GT 2: what we want to see

South African business confidence fell to a nine-month low in July, after a week of deadly riots, looting and arson cost the economy 50 billion rand ($3.4 billion) in lost output and imperiled at least 150,000 jobs.A confidence index compiled by the South Afr…
Read more

Joe Root is not the first England captain to have plenty to deal with, but few have carried the team in the way he does.
Read more

Union: Dozens of U.S. Capitol Police have left since...

“We have many officers on the fence about whether to stay with this department.”
Read more

Audio released of first responders at deadly condo collapse in Florida; Yankees fan finally gets her dream of being bat girl after 60-year wait
Read more

Pipeline hack sends people scrambling for fuel in the...

The cybersecurity attack on the Colonial Pipeline has stricken fear and stress into the lives of people in the Southeastern U.S. who have been waiting in long lines amid distribution problems and panic-buying
Read more

The Coca-Cola 600 is NASCAR's longest race and a Memorial Day tradition that pays tribute to America's fallen veterans.
Read more

U.S. Vice President Kamala Harris has laid flowers at a Paris memorial to mark the anniversary of Islamic State attacks that killed 130 people in the French capital six years ago
Read more

A group of seven hunters were rescued from an Alaska fish camp Thursday night after a frozen river trapped them for about a week, officials said Friday.
Read more

Sen. Ron Johnson (R-Wisc.) said Thursday that he is still "undecided" on whether he'll run for reelection next year.
Read more

Indigenous activists shine a light on the history of...

Indigenous activists are bringing attention to the past federal practice of forcibly assimilating Native American children by enrolling them in boarding schools, often separating them from their families for life. Nancy Chen has more.
Read more

Perth Tolle on the Markets (Podcast)

Anheuser-Busch to give away free alcohol if US hits...

Anheuser-Busch, the national brewer that produces Budweiser, announced Wednesday it will give away free alcohol if the nation reaches President Joe Biden's goal to have 70% of US adults receive at least dose of the vaccine by July 4.
Read more

Biden pushes back on GOP criticism of COVID vaccine...

President Biden is hitting back after Republican governors and lawmakers criticized him over new COVID-19 vaccine mandates. During a visit to a middle school in the nation's capital Friday, the president accused some GOP governors of being "cavalier" with the…
Read more

As Democrats approach a crucial stretch to pass a new voting rights bill, here's a point to remember that most people forget: White people -- not just people of color -- have been some of the biggest victims of voter suppression tactics.
Read more

Official: US to spend $3B for antiviral pills for...

Windows 11 gets better looking with a nifty visual...

More core Windows 11 apps are getting the ‘Mica’ effect, along with Microsoft Word, too.
Read more

Putin to self-isolate due to coronavirus among inner circle

Taiwan’s leader meets with Mace, Slotkin other US lawmakers...

U.S. Rep. Nancy Mace, R-S.C., and four other members of Congress traveled to Taiwan this week for a meeting with its president, in an unannounced visit held in defiance of the Chinese government.
Read more

The basketball legend becomes a minor partner in the sports group that also owns the Boston Red Sox.
Read more

Watchdog warns US will repeat mistakes of Afghanistan

The independent watchdog created by Congress to scrutinize the war in Afghanistan eviscerated the U.S. government’s handling of the conflict and said such mistakes are certain to be repeated.John Sopko, the special inspector general for Afghanistan...
Read more

Nikola Jokic was selected with the 41st draft pick when he entered the NBA seven years ago.
Read more

Sen. Ron Johnson and Sen. Rand Paul are accusing the HHS of stonewalling on the origin of the coronavirus and have sent multiple letters requesting documents.
Read more

What do developers want and need from secure coding...

Vaccine mandate for police? NYC looking at ‘all options’

Cyberattack shuts down US pipeline that supplies 45% of...

A cyberattack has forced the shutdown of Colonial Pipeline, which delivers 45% of all fuel consumed on the East Coast.
Read more

A handful of companies are pursuing airborne seeding, but there’s little evidence so far that the tactic will succeed.
Read more

Russian President Vladimir Putin addressed reporters after his summit with President Biden, calling the meeting "constructive," but he said he was not invited to the White House. "It seems to me that we did speak the same language," Putin said. "It certainly …
Read more

Opinion | I’ve Been a Critical Race Theorist for...

Seemingly overnight, my obscure legal specialty became a national lightning rod. What would CRT say about that?
Read more

Boxing-Briton Price gets shot at middleweight gold after last-gasp...

Reigning world champion Lauren Price of Britain made a thrilling last-round comeback to reach the women's Olympic middleweight boxing final, where she will face Li Qian who earned herself a shot at winning China's first boxing gold in nearly a decade.
Read more

It's Tuesday, welcome to Overnight Defense, your nightly guide to the latest developments at the Pentagon, on Capitol Hill and beyond. Subscribe here: ...
Read more

A Missouri man who has maintained his innocence in a triple murder got an opportunity to testify at a three-day hearing that could lead to his release after serving 43 years in prison. That decision is now in a judge's hands.
Read more

Greens see ‘no contradiction’ over independence and recovery

Co-convenor Patrick Harvie said Scotland's ability to recover from the pandemic was hindered by the UK government.
Read more

The rat pack reportedly darted inside a kennel to steal food from the dish of a dog sitting inside.
Read more

How the world is fighting climate change with murky...

Scientists warn that the data may be too unreliable to guide the precautions that governments, businesses and retirement fund managers must take in the coming decades.
Read more

When Kezia Fitzgerald's 1-year-old daughter Saoirse was fighting a stage four neuroblastoma tumor, she knew she wanted to do everything in her power to make Saoirse's treatment as comfortable as possible. So when Saoirse's catheters and vascular access lines …
Read more

Biden ordering states to make vaccines available to all...

Biden will tell Americans tonight that the country will be "closer to normal" by July 4.
Read more

As Brentford prepare for their first top-flight season since 1947, BBC Sport looks back at their unlikely journey to join England's elite.
Read more

Tesla wants to keep secret its response in Autopilot...

Tesla wants to keep secret its response to the U.S. government’s request for information in an investigation of its Autopilot partially automated driving system
Read more

The White House is preparing to welcome German Chancellor Angela Merkel. She and President Obama will discuss ways to handle conflict in Ukraine and find common ground. Bill Plante reports from the White House.
Read more

Spider-Man: No Way Home fans are convinced its trailer...

MCU fans are convinced that the first Spider-Man: No Way Home trailer will be released next week - and this evidence suggests why.
Read more

EXPLAINER: What was, and is, al-Qaida?

The terror group al-Qaida under Osama bin Laden grew into a generational threat to America that culminated in its Sept. 11, 2001, attack that brought down the World Trade Center in New York
Read more

3 shot, including 1 child, in Times Square

Congress must fight overregulation of blockchain and crypto innovators

Congress must continue to assert itself as a check on executive overreach in order to protect our innovators at home.
Read more

Christian Eriksen was treated for about 10 minutes after collapsing. He was then carried off on a stretcher.
Read more

Republicans believe the recall election lends a platform to make their case both to would-be voters and prospective donors who had written off California as a lost cause.
Read more

AOC just ramped up the pressure for a Supreme...

The final days of a Supreme Court term are bathed in drama, with the justices typically holding the release of their rulings in the highest profile cases until the last moment before they (and much of official Washington) heads out of town for the summer.
Read more

The Biden administration filed an emergency request with the high court in its attempt to prevent reinstating the controversial immigration policy.
Read more

Eighty-three of 99 participants said the journalism environment has "changed for the worse" after a law was adopted in response to pro-democracy protests.
Read more

Barbados becomes a republic and parts ways with the...

The Caribbean nation parts ways with the Queen in a ceremony attended by Prince Charles and Rihanna.
Read more

Massachusetts authorities investigating Saturday’s deadly shooting in Winthrop said they have found evidence that the incident may have been a hate crime, a report said.
Read more

Elinor Barker: ‘Kenny, Storey and Deignan show I can...

Olympian Elinor Barker says fellow cyclists Laura Kenny, Sarah Storey and Lizzie Deignan have given her the belief she can return to the very top of the sport after giving birth.
Read more

"American Idol" contestant Caleb Kennedy is departing the singing competition after a video surfaced on social media of him posing with a person in a hood reminiscent of the Ku Klux Klan."Hey y'all, this is gonna b...
Read more

Only on "CBS This Morning," a new Congressional investigation into infant inclined sleepers finds that Fisher-Price failed to ensure its Rock 'n Play was safe and ignored warnings it was dangerous. Consumer investigative correspondent Anna Werner got an exclu…
Read more

Flanker Hamish Watson says having eight Scots with the British & Irish Lions has boosted confidence ahead of facing Australia on Sunday.
Read more

Wigtown Book Festival gets ‘show back on the road’