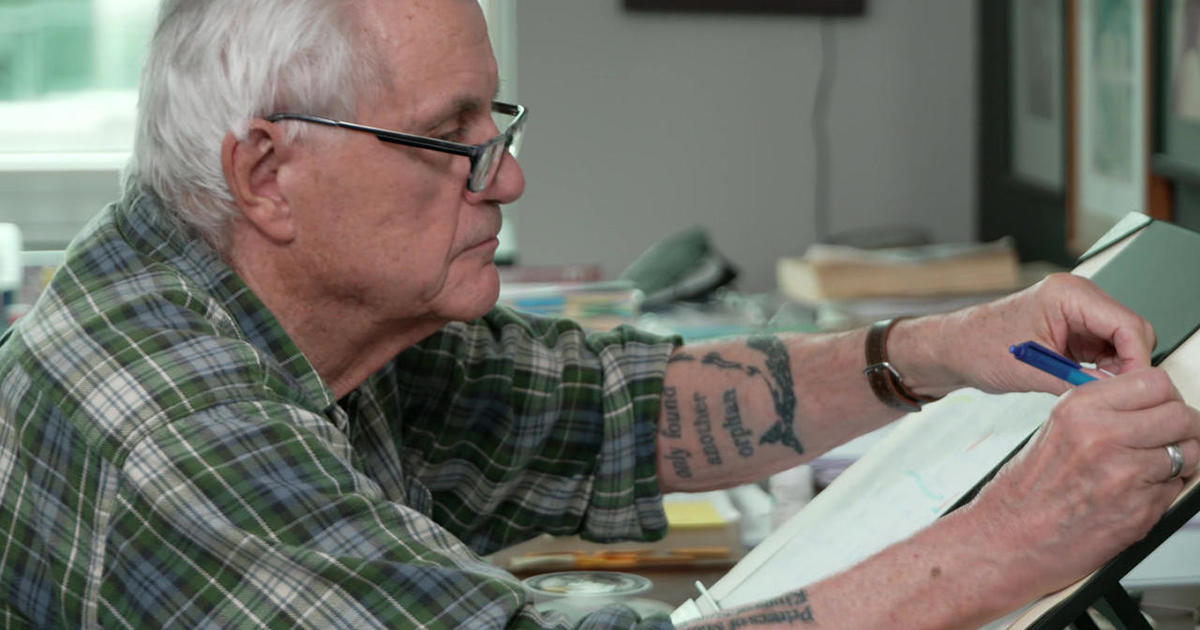 Considered one of the great authors of the 20th and 21st centuries, John Irving thinks of himself as a 19th century writer.

Why? “Because those novels have always represented the model of the form for me,” he told correspondent Rita Braver. “I loathed Hemingway. I thought Faulkner was excessive. Fitzgerald was okay, but lazy at times. I was enamored of the kind of novel all of my classmates in school despised: ‘Oh, God, Dickens, I gotta read Dickens, I gotta read Hawthorne,’ you know?”

Irving’s favorite 19th century novel, “Moby Dick,” was published in the U.S. at at around 600 pages. He’s just released “The Last Chairlift,” which goes for almost 900 pages! “I know, if only it had been three novels, I could have been paid three times as much!” he said. “If you write a novel that encompasses a whole lifetime, well, it’s hard for that to be a short novel.”

Irving has written 15 novels, including some blockbusters, such as “The World According to Garp,” “A Prayer for Owen Meany,” and “The Cider House Rules.” His latest, published by Simon & Schuster (part of Paramount Global, CBS’ parent company), revisits some of his recurring themes, including a mysterious mother and an unknown biological father. “This is not a new premise for many of my readers,” Irving said.

The author has mined his life as the starting point of such acclaimed works of fiction as “The World According to Garp” and “The Cider House Rules.” Now 80, he has published his first novel in seven years, “The Last Chairlift,” a tale of sexual politics and ghosts.

Braver said, “I was warned against asking you if your books are autobiographical, yet that is what happened to you; you were not raised by your own birth father.”

“I try to have a little fun with my autobiography,” he replied. “And I often begin a novel in those very familiar scenes. And then, I utterly change what happens.”

Now 80, Irving holds joint U.S.-Canadian citizenship, and lives in Toronto with his Canadian-born wife, literary agent Janet Turnbull Irving. But he grew up in Exeter, New Hampshire, and, like the narrator of his new book, attended the prestigious Phillips Exeter Academy, where his stepfather taught. As with many of the characters in his novels, wrestling and writing were Irving’s early passions.

Irving worked as a teacher and wrestling coach while writing three little-noticed novels. Then, one hit it big in 1978: “The World According to Garp,” which won the National Book Award. “When the success happened, I knew how fortunate I was now to be able to do this thing, the only thing I ever wanted to do, fulltime.”

Garp: “I hate to use a corny line like this, but haven’t I seen you before?”Muldoon: “You like football?”Garp: “Oh, yeah, used to watch it quite a bit.”Muldoon. “Well, you might have seen me. I was a tight end with the Philadelphia Eagles. Number 90, Robert Muldoon.”Garp: “…oh.”Muldoon. “I had a great pair of hands.”

And there is one person who truly appreciates how revolutionary it was for Irving to create a trans character so many decades ago: “It’s such a blessing to be able to have that kind of relationship with my dad, to know that he was writing about trans people in 1978,” said Irving’s daughter, actor, filmmaker and writer Eva Everett Irving, who grew up as the youngest of Irving’s three sons.

In “The Last Chairlift,” the narrator is the only major straight character: “I wanted to turn the scales so that I could see a loving family of queer people who are trying to look after this straight guy who’s the last guy to know,” he said.

“The last guy to know everything?” said Braver.

“Yes! A perfect narrator,” he laughed. “It is a perfect storyteller.”

Irving always writes his first draft by hand, and always starts with the ending: “When I first read ‘Moby Dick,’ that was the novel that showed me how you foreshadow an ending. If you really know exactly what is going to happen, you can do it this way.”

In fact, Irving has the last line of “Moby Dick” (“…only found another orphan”) tattooed on one arm. On the other: a tattoo that recalls the final line of his “Cider House Rules” (“Princes of Maine, Kings of New England”). Irving’s screenplay of the novel won him an Oscar in 2000.  “It was fun, it was gratifying,” he said.

The film version stars Tobey Maguire as a young man who grows up in an orphanage run by a doctor (played by Michael Caine) who also performs illegal abortions to help desperate women.

Braver asked, “Do you feel that your role as a writer is in part to speak out on political subjects?”

“When there is a political subject, I don’t back away from it, but it is never the foundation of why I write a novel,” he replied.

Irving said his next novels will be shorter, but he has no plans to stop writing. And, he says, he often forgets about his age, as at live events when he spots an old friend in the audience:

“Here I am, an 80-year-old croc sitting on stage, and I look out and I say, ‘Oh my God, he’s gotten older!’ It doesn’t even occur to me that person’s probably looking at me and thinking, ‘Oh, Jesus, John doesn’t look very good, you know?”

READ AN EXCERPT: “The Last Chairlift” by John Irving Hitting the Books: How to uncover the true nature...

Soccer legend Lionel Messi plans to get into tech...

Ukraine crisis: Five reasons why Putin might not invade

US Grand Prix to be held in Austin for...

Growth in corporate profits may not be as strong...

Time to grab your pass to TechCrunch Disrupt in...

Truth and the American Tradition

Don’t get lost in the cloud: How to manage...

Bose is reportedly laying off staff amid poor sales

Dozens of gas-filled ships are piling up off Europe’s...

Labor rules for German Catholic-run institutions to be eased

Biden to deliver prime-time speech on ‘battle’ for democracy

McDonald’s Says Only 1% of Shareholders Backed Icahn Board...

A Jewish detective bows on TV during a wave...

Republicans are down to four finalist cities for 2024...

French cardinal to be investigated over abuse confessions

Hitting the Books: How mass media transformed coyotes into...

A Ukrainian Town Deals Russia One of the War’s...

Nathaniel Rateliff: Music on the edge