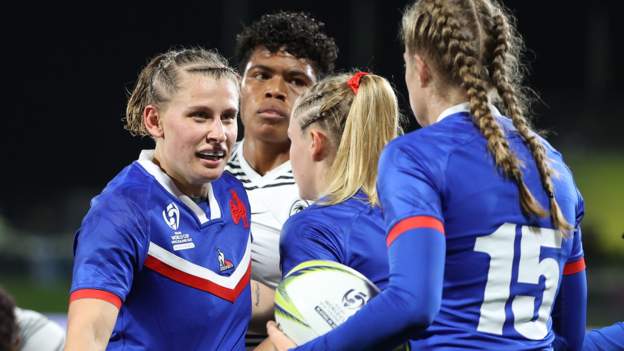 Emeline Gros made more metres than any other forward in the match, racking up 47m with ball in hand

France secured their place in the quarter-finals with an assured victory that ended Fiji’s debut World Cup campaign.

Wing Marine Menager crossed early on after a powerful driven lineout sucked in the Fiji defence, and centre Maelle Filopon scored two tries as France accelerated away in Whangarei.

They seem set to be the fourth seeds in the last eight, putting them on course for a potential semi-final with hosts New Zealand.

England, who beat France last weekend, are overwhelming favourites to overcome South Africa on Sunday and complete a clean sweep of Pool C.

Wales – beaten by Australia in Pool A earlier on Saturday – will make the last eight providing South Africa do not win.

Fiji, who beat Great Britain to Olympic sevens bronze in Tokyo last year, showed plenty of enterprise against France but could not find the consistency and cohesion to threaten an upset.

They will, however, come away from New Zealand with valuable experience and a maiden World Cup win.

Fiji, the lowest-ranked side to qualify for the tournament, beat South Africa via Karalaini Naisewa’s last-minute try last weekend.

After an impressive performance in a narrow defeat by tournament favourites England last weekend, France underlined their credentials as title contenders against Fiji at the Northland Events Centre.

With first-choice scrum-half Laure Sansus ruled out of their campaign with a knee injury, Pauline Bourdon, her partner and Toulouse team-mate, was a lively presence at nine.

Bourdon’s sharp blind-side break set up Melisande Llorens for France’s second try before Filopon’s scores, either side of the interval, ensured a bonus point.

Emeline Gros and Emilie Boulard added tries in the final 20 minutes before replacement front row Celia Domain rumbled over for France’s seventh in the final play of the game. Former NFL running back sentenced for role in health...

General Election: When is the next one and could...

Should Motherwell have had a penalty against St Mirren?

Waukesha suspect Darrell Brooks due back in court as...

Spotify’s Pandora-esque Stations app will shut down on May...

Home prices are falling in these 98 major housing...

Rob Gronkowski: Tom Brady ‘is going to be ready...

Who Will Be The Crypto Industry’s Winners and Losers?...

Scotland’s papers: Tory rebels plot against PM and US...

EXPLAINER: How plausible is Chinese military aid for Russia?

Apple Is Just Three Weeks Away From Showing Off...

Use DORA metrics to support the next generation of...

Vast majority in new poll dissatisfied with direction of...

Cereal maker Magic Spoon scoops up $85M as it...

Google Maps Live View will let you use AR...

Shanghai to Lock Down Half City in Turns for...

This iOS 16.1 update makes the Dynamic Island even...

Thrilling final day in store at PGA Championship as...

Diver finds another set of human remains near Lake...

One state now has app to claim roadkill for...

Norman Lear, one of television’s most iconic producers, turns...

Fruitful emerges from stealth with $33M in funding and...

Michigan Gov. Gretchen Whitmer says she will not run...

McDaniel to run for another term as RNC chair

Nedd Brockmann 'went through hell and back 10 times' as he ran...