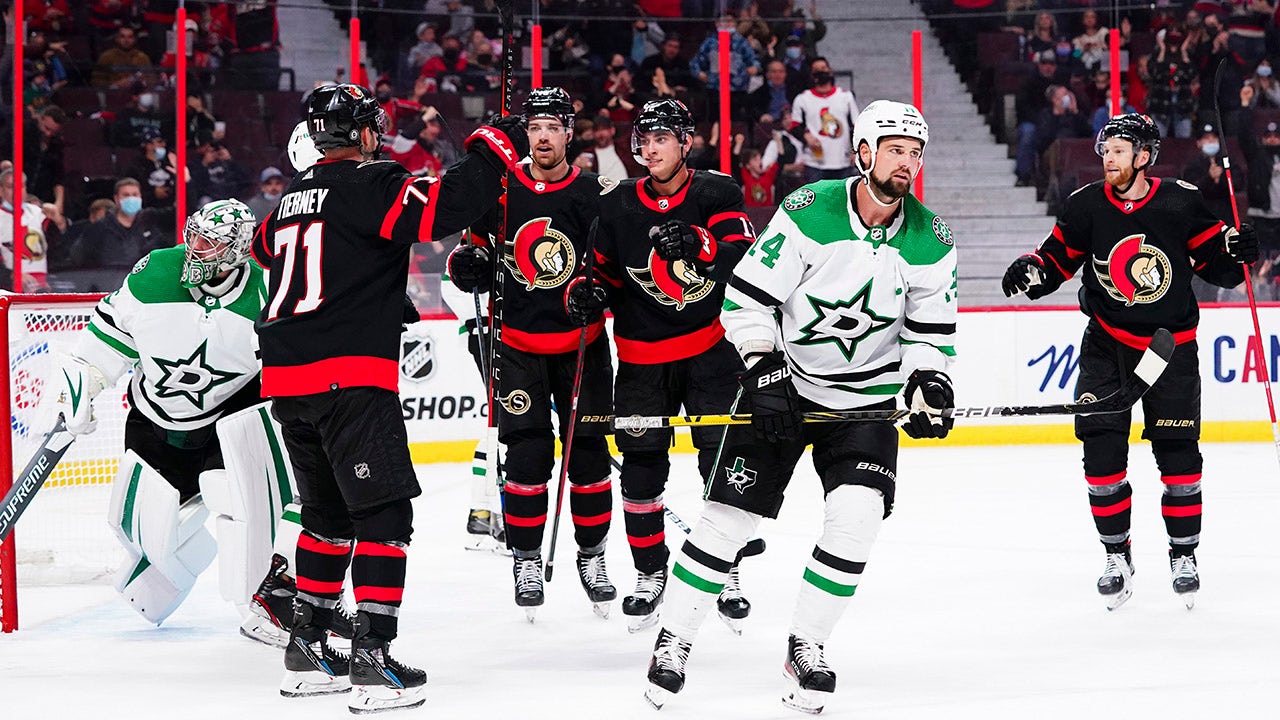 Chris Tierney scored on two second-period power plays and Filip Gustavsson made 32 saves in the Ottawa Senators’ 3-2 victory over the Dallas Stars on Sunday night.

“Im just trying to do whatever I can to help the team win,” Tierney said. “A couple good bounces. But thats what they say, is if you go to the net youre going to get bounces, so its good.”

The Senators improved to 2-1-0, rebounding from a 3-1 loss at Toronto on Saturday night in the second game of an opening home-and-home series with the Maple Leafs. Ottawa has started well after opening 1-8-1 last season.

“I still have nightmares about how long it took us to get our second win,” Senators coach D.J. Smith said. “To get two wins in three games is good for us, especially going into a three-day break here.”

Nick Paul also scored for Ottawa and Connor Brown had three assists to reach 100 for his career. Gustavsson played his first regular-season NHL game since May 12.

“We play these young, fast teams and those are the ones you need to be careful of because they go all out,” Dallas forward Tyler Seguin said. “Theyre all fighting for jobs. Theyre fresh in the league with excitement so you know theyre going to be coming and they did (Sunday) and they did a good job.”

Michael Raffl and Joe Pavelski scored for Dallas. Anton Khudobin made 24 saves. He lost to Ottawa for the first time in his career after opening 8-0-2 against the Senators.

“I think we deserve better than a loss,” Dallas coach Rick Bowness said. “We deserved a point and didnt get it, but a couple of guys that we need to get going, got going. Weve got some guys trying to find their game, guys frustrated with their game and were going to have to play our way through it.”

Tierney gave Ottawa a 2-1 lead when Shane Pinto’s shot deflected off his chest at 9:20 of the second. With a minute remaining in the period, Tierney took a pass from Zach Sanford and pushed the puck toward the net to beat Khudobin.

Pavelski scored for Dallas with 5:43 left in the third.

Raffl opened the scoring at 4:34 of the first on Dallas’ first shot. Fifty seconds later, Paul tucked a backhander under the crossbar to tie it.

Stars: At Pittsburgh on Tuesday night. Mike Tauchman robs Albert Pujols of a walk-off home run with an unbelievable catch at the top of the wall, forcing extra innings.
Read more

Norwich goalkeeper Dan Barden, who is on loan at Livingston, is diagnosed with testicular cancer, aged 20.
Read more

Five of the biggest sets for the online event have been filmed in dramatic locations across the UK.
Read more

Less that half of those who have not been vaccinated are worried about the contagious Covid variant.
Read more

Limiting a child's exposure to toxic chemicals is a big issue for many parents, but finding eco-friendly products may cost big money. One manufacturer claims to market the only car seat free from the most hazardous flame retardants. Investigative reporter Jul…
Read more

Fan runs on court, gets tackled during 76ers-Wizards playoff...

The man ran on the court and touched the backboard​ before being tackled by a security guard.
Read more

Rep. Thomas Suozzi (D-N.Y.) said Monday that he expects there to be more agreement this week on Democrats' multi-trillion dollar social spending package, including on the state and local tax (SALT) deduction.Suozzi...
Read more

Graham says Israel will request $1 billion from US...

Sen. Lindsey Graham (R-S.C.) said Tuesday that Israel will request $1 billion from the U.S. to replenish its Iron Dome missile defense system and other military supplies after an 11-day war with militants in the Gaza Stri...
Read more

Facebook Oversight Board to rule on Trump ban Wednesday

Facebook's Oversight Board will announce its decision on the case weighing whether to permanently ban or reinstate former President Trump's account on Wednesday.The board tweeted the update on Mo...
Read more

Analysis: Israel’s political stalemate is unmoved by the conflict...

Lawrence Block has written many books, under many names _ from Sheldon Lord to Jill Emerson
Read more

Good Monday morning, Illinois. The tree is up. Dont judge me. PROGRAMMING NOTE: Well be off for the big gobble gobble this Thursday and...
Read more

The White House on Thursday released its annual staff report to Congress, revealing the salaries of scores of West Wing employees.In an accompanying fact sheet, the White House said that a maj...
Read more

Climbing guide estimates there are more than 100 COVID-19...

A Mount Everest climbing guide estimated that there have been more than 100 coronavirus cases on the summit this year.
Read more

The Weekly Fix: God Help Whoever Botches The Inflation...

Welcome to The Weekly Fix, where the stakes are high and the debt is distressed. I’m cross-asset reporter Katie Greifeld.
Read more

The White House is looking to refine its sales pitch for the newly passed infrastructure bill in a bid to boost the administration's standing with voters after a difficult election for Democrats and as President Biden has...
Read more

Boston’s next mayor will make history as 2 women...

Whichever candidate wins, a woman and person of color will be elected to the office.
Read more

He appeared in a Levi's advert in 1985 and had a hit with Each Time You Break My Heart.
Read more

Nancy Pelosi meets with Pope Francis at Vatican after...

Nancy Pelosi traveled to Rome over the weekend where she met with Pope Francis amid an ongoing debate over abortion in America.
Read more

The Huawei Mate40 Pro, does not shy away from its history showing the strong design aesthetics synonomous with the Mate series.
Read more

Michele Thomson puts difficult times behind her to lead the Scottish Women's Open by two strokes after a course record first round.
Read more

Cop shot and killed in line of duty while...

A California police officer has been killed in the line of duty and another one injured after they were shot while serving a search warrant.
Read more

Why Democrats are nervous about Virginia

History shows that off-year and special elections don't necessarily reflect the state of national politics. When McAuliffe won Virginia's gubernatorial race in 2013, for instance, that win was not indicative of the wreckage Democrats would suffer in the 2014 …
Read more

Four Republican lawmakers are pressing social media giants for data on the impact their products have on children's mental health. The lawmakers, led b...
Read more

Four-time Grand Slam winner Naomi Osaka broke down in tears before resuming her first news conference since refusing to speak to media at the French Open.
Read more

Items belonging to Gabby Petito's missing fiancé have been found in a Florida park, the FBI says.
Read more

Dune release date delayed again – but not by...

Why should you care about NFTs&quest; You can watch...

This week on Seriously? our experts explain why NFTs might be more than hype.
Read more

Cop26: Why were there so few arrests at climate...

Tens of thousands of climate protestors gathered in Glasgow - but there was no serious violence or damage to property.
Read more

Abortion protest exclusion zones to be debated at Stormont

Drivers on a Portland highway were caught in a sticky situation on Thursday after a truck filled with 7,500 pounds of live eels overturned, covering cars in slime and causing a 4-car pileup.
Read more

Obama's doctor reveals that the 52-year-old's health is in excellent condition after recently receiving an annual physical. This is the first time in three years the White House disclosed information about the health of the commander in chief. Charlie Rose re…
Read more

How the Trillion Dollar Coin Could End Debt Ceilings...

Ben Domenech: Why does US persist as extreme abortion...

Why did Joe Biden flip on the Hyde Amendment and taxpayer-funded abortions after a career of saying he believed the opposite? He knows who runs the left, wanted to be president, and was willing to make a deal to do it.
Read more

As expected, Samsung picks Texas for its new $17...

A man in Iowa received an $8 million settlement after being shot by police in 2016 left him paralyzed. The City of Cedar Rapids' settlement with Jerime...
Read more

Italy’s reserves really do play as well as its starters. Or just about.
Read more

A glimpse of Charles Darwin’s ‘paradise’

A new book explores the naturalist's lost childhood garden at The Mount in Shrewsbury.
Read more

Stripe has raised $600 million in its latest funding round, giving the company a $95 billion valuation, the online payments processing company said in a statement.
Read more

Residents in Gaza and Israel told ABC News of the fear and uncertainty during the worst violence in the Israel-Palestine conflict in years.
Read more

Despite its criticisms, the RX 6600 XT's launch could indicate that better days are coming for the PC gaming and building community.
Read more

Steve Clarke says playing in the Euro 2020 finals was the catalyst for the "no mean feat" of six wins in a row as his Scotland side secure a home World Cup play-off semi-final.
Read more

AmEx Delays Employees’ Return to Office Until at Least...

American Express Co. postponed the full return of workers to its offices until at least Oct. 11, joining a growing number of firms taking a more cautious approach as a new wave of coronavirus cases washes over the U.S.
Read more

A man thought to have been the head of the world's largest family — with 39 wives and 94 children, according to Reuters — has died in northeast India.
Read more

The United States has administered 317,117,797 doses of COVID-19 vaccines in the country as of Saturday morning and distributed 379,003,410 doses, the U.S. Centers for Disease Control and Prevention said.
Read more

An Iowa man accused of bringing guns and ammunition to a Chicago hotel room over the Fourth of July weekend proposed to a woman shortly after bonding out of jail Wednesday, according to reports.
Read more

Texas governor to Border Patrol agents under investigation: ‘I...

Kanye agrees with Kim on joint custody in divorce...

Psaki charges sexism and racism are part of what’s...

House Speaker Nancy Pelosi (D-Calif.) is throwing support behind legislation aiming to expedite federal rental aid to tenants and landlords, an issue that has taken on particular urgency for Democrats after a recent Supre...
Read more

N.Y. Giants Had Violent Culture off the Field, Lawsuit...

The New York Giants fostered a workplace rife with intimidation and physical violence, according to a lawsuit filed by the team’s former video director, who claims he was fired for complaining about an assault on another worker.
Read more

Disappearances rise on Mexico’s ‘highway of death’ to border

As many as 50 people are missing after setting out on three-hour car trips this year between Mexico’s industrial hub of Monterrey and the border city of Nuevo Laredo on a well-traveled stretch of road local media have dubbed “the highway of death.”
Read more

“We’re committed to birddogging Kyrsten Sinema with her constituents until the very end,” Our Revolution Executive Director Joseph Geevarghese said in an interview.
Read more

Jay B Reinvents Himself With Somo:Fume: ‘There Are No...

Jay B of Got7 tells MTV News about his new solo album 'Somo:Fume,' what he's learning from working with a new team at H1gher Music, and what he's leaving behind in his new era.
Read more

One man was shot and an officer sustained a knife wound during the incident on Saturday, police say.
Read more

Remembering Colin Powell upon his death: Former President Bush calls him 'a...