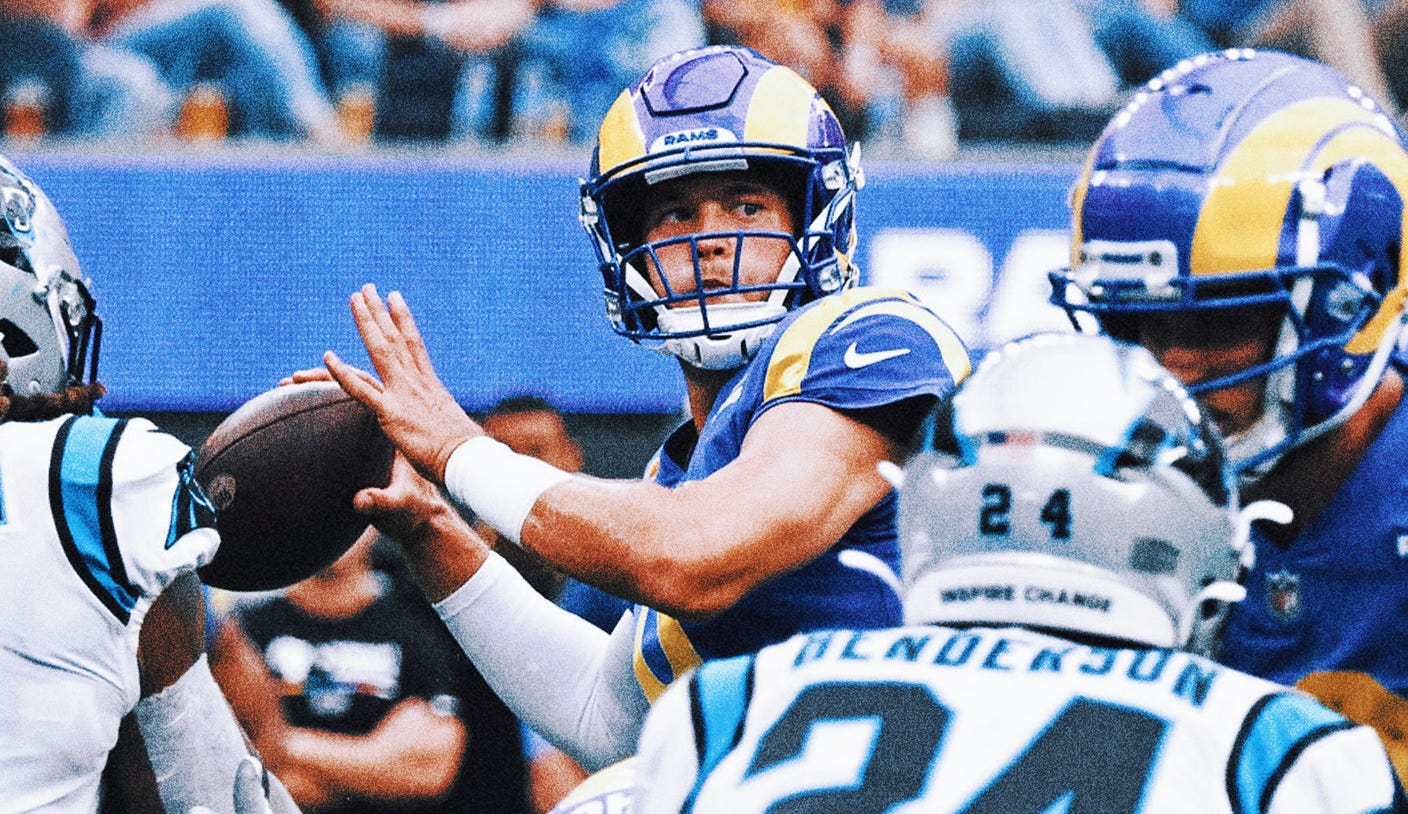 INGLEWOOD, Calif. One of the last players left in the locker room, Los Angeles Rams All-Pro receiver Cooper Kupp, shared his vision for what his team’s offense should look like when operating on all cylinders: vintage 1980s San Francisco 49ers.

“Really, the identity of a Bill Walsh offense,” Kupp said. “If you go all the way back to the roots of what Sean really came from, it’s about stretching a team horizontally and making them defend every blade of grass.”

Back then, the Niners used jet sweeps to stretch the defense from sideline to sideline. That’s been a staple of McVay’s offense over the years as well, and the Rams got back to those plays with great results in the team’s 24-10 win over the Carolina Panthers at SoFi Stadium on Sunday.

“Those are really just an extension of the running game,” McVay said. “It’s not really a specialty. There’s a lot of things we’ve done as you’re seen over the last couple years. To give it to any of our receivers is something that makes people be able to honor that and legitimately account for it.”

Second-year pro Ben Skowronek scored his first career touchdown on a 17-yard run with a key block from receiver Allen Robinson. A free-agent addition from the Chicago Bears, Robinson scored his second touchdown of the year on a five-yard fade route, finishing with five receptions for 63 receiving yards.

Kupp, Tutu Atwell and Brandon Powell also had carries on jets sweeps, while Darrell Henderson Jr. shouldered the running load with 43 yards on 11 carries. The Rams finished with 111 rushing yards on the day.

L.A. trailed 10-7 at the half before the Rams blew things open by outscoring the Panthers 17-0 in the second half.

Turnovers, however, remain an issue. Matthew Stafford threw his NFL-high eighth interception, which led to Carolina’s only touchdown. His pass intended for Kupp was picked by defensive back Donte Jackson, who ran it back 30 yards for the score.

Stafford leads the NFL with 11 turnovers through six games, including two interceptions for scores and a forced fumbled for a touchdown. He’s the active NFL leader with 29 pick-sixes over his 13-year NFL career. Only Brett Favre (32) has more interceptions returned for touchdowns in league history.

Stafford finished tied for the league lead with 17 interceptions last season. But the Rams overcame those turnover issues, largely because of Stafford’s clutch play in the postseason.

“It was not an overaggressive thing,” Stafford said about Sunday’s pick-six. “It was just a tough play that happens in this game, and you’ve got to move on from it.”

Along with the turnovers, lack of continuity and injuries have led to inconsistent offensive production all season.

Los Angeles may have lost another body up front, when left tackle Joe Noteboom had to leave the game due to an ankle injury. McVay said he feared Noteboom could have an Achilles issue. The Rams had already lost starters up front in left guard David Edwards, center Brian Allen and right guard Coleman Shelton due to injuries, leading to issues in pass protection and the running game.

Running back Cam Akers was inactive on Sunday due to personal reasons, and the Rams are reportedly seeking to trade him. McVay did not provide more information on Akers’ status, saying he would address it in more detail on Monday.

However, the Rams are clearly in the market for more playmakers on offense. Those names potentially include Carolina running back Christian McCaffrey, who finished with 158 scrimmage yards for the Panthers on Sunday. Odell Beckham Jr. also remains a possibility to return to the team, with McVay saying this week that the Rams have not given the talented receiver their best, final offer.

It’s not exactly how the defending Super Bowl champs wanted to start the year. But heading into the bye week, the Rams are 3-3, good enough for a tie atop the NFC West with the 49ers (3-3) and the Seattle Seahawks (3-3).

McVay now has time to self-scout, get some players healthy and get his team back on track for the second half of the season.

“Whether it’s an interception or a misfit, things of that nature, a lot of things that are happening to us are from our doing,” Wagner said. “So, if we can fix those things up and understand where we need to get better going into the bye, I feel really good with where we’re at.” Anyone can get monkeypox, but CDC warns LGBTQ community...

Waymo is expanding its driverless program in Phoenix

Russia moves to take control of Sakhalin-2 oil and...

Jan. 6 Hearings Will Not Change How Donald Trump...

Should China worry about its shrinking population?

Gang in stab attack on bus after victims tracked...

The Morning After: The world of cryptocurrency continues to...

Air Raids On and Off the Field

Family rents car to drive from Phoenix to Boston...

Where Is Mayor Adams? The Story Of Adam Klotz’s...

This ‘Sex and the City’ character is teaching us...

The refugee crisis is much bigger than Ukraine

Twitter is testing podcasts as part of a redesigned...

Why do so many women footballers get ACL injuries?

A 12-year-old was fatally shot by a classmate at...

Time to Buy the Dip?

Qatar Airways Says It Didn’t Have to Accept Defective...

Threats to Congress decreased after record high in 2021,...

The legal principle that could block Clarence Thomas’ gay...

UK targets wealthy Russians, banks in new round of...

EXPLAINER: What help are North Korean weapons to Russia?

Climate change will make it hard to predict the...

Kamala Harris to speak at Essence Festival, expected to...

Jeff Ettinger says abortion rights are on the minds of 1st District...